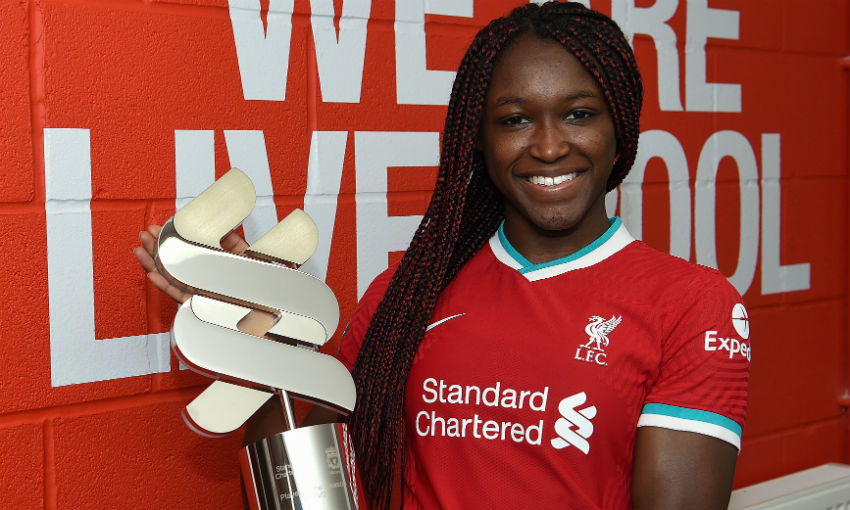 Rinsola Babajide has been voted Liverpool FC Women's Standard Chartered Player of the Month for November.

The flying winger was a threat in every game for the Reds but an undoubted highlight was her stunning winning goal in the FA Women’s Championship victory over Sheffield United.

A delighted Babajide told Liverpoolfc.com: “It was an important game for us, so it was really nice to score the winner. Thanks to all the fans for voting for me and showing love for that goal on social media.

“It was also great to see it in the club’s Goal of the Month list alongside so many great players.”

Babajide’s form at the start of this season has seen her called into the last two England camps and she spent a large part of the latest international break based at St. George’s Park with Phil Neville’s squad.

“It went really well,” said the 22-year-old. “It was a very competitive environment and I managed to be on the winning team in the two games we played. I got a goal and an assist when I came on in the match we played at Stoke, so I think I kept my standards high and I'm working harder than ever.”

Babajide’s efforts saw Neville speak about the impact she and other young players could have with the Lionesses in the next two to three years as he said Babajide had ‘potential to be a very special player’.

The Liverpool No.10 continued: “It’s really nice to hear that they value you. It just makes me want to push on even more and become the player everyone knows I have the potential to be. Every day I want to be better than I was the day before, so I hope I can bring that timescale forward!”

The Reds resume their league campaign on Sunday against Crystal Palace Women in a game that will see fans return to Prenton Park for the first time since the start of the COVID-19 pandemic – something the LFC Women squad are really looking forward to.

“It’s exciting to have the fans back in the ground after so long. We’re all delighted to have them back,” Babajide said.

“I actually spent four years at Crystal Palace when I was younger, so I’ve got a lot of history there and I'm really keen to do well on Sunday.

“We’ve got to treat every game as a cup final and we’re looking forward to it.”

Tickets for Sunday must be bought in advance today with a digital ticket sent to your phone. Full details are available here.

The game will also be shown live on LFCTV, LFCTV GO, YouTube and on LFC Women social channels.