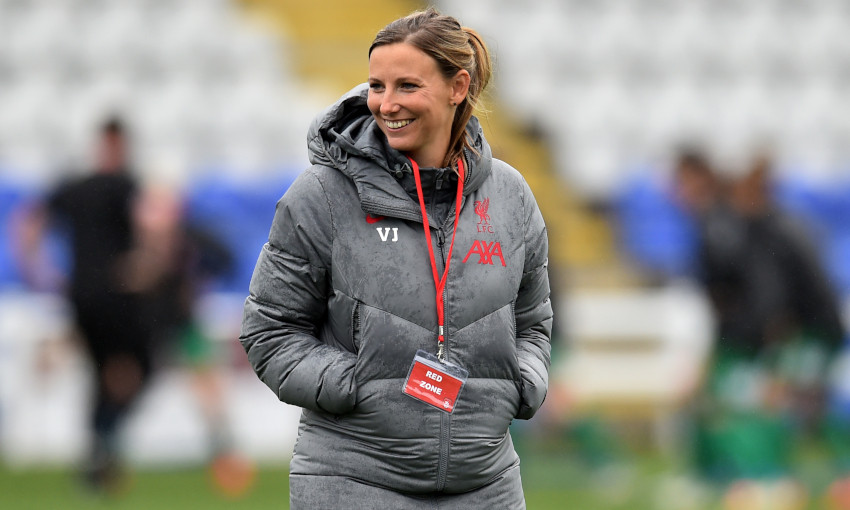 In her latest column, Liverpool FC Women manager Vicky Jepson reflects on Sunday’s 2-2 draw away at Lewes FC and looks ahead to another big week of fixtures against Manchester City and Sheffield United.

It was a frustrating day for us to draw with Lewes FC despite taking the lead twice. We just couldn’t get it over the line and get the win but with Leicester City losing, a point is better than nothing. We’ll start with the positives. Lewes are actually one of the best defensive teams in the FA Women’s Championship, we know that, and they don’t concede that many goals from open play. The goals that they have conceded before Sunday were from set-pieces and a penalty and only one from open play, so we knew going into the game that any opportunity we created we had to be clinical on the day. I thought the two goals we scored through Amalie Thestrup and Rinsola Babajide were well-worked and full credit to the players because they were fantastic finishes.

The disappointing thing for us was that if you go ahead twice in a game you need to control it and see the game out. That’s where my frustrations with the team are and the team are frustrated themselves. We have to be controlling leads and not give away any opportunities for the other team to get back into the game. We spoke before the game about them sitting in and then getting ready to counter-attack us. We conceded from one like that and we also said don’t give away cheap set-pieces, especially in that wind and the difficult conditions, but unfortunately, we did. We just didn’t defend it well enough and it was really disappointing to see that. We have to make sure that when we get ahead, we control our lead better and we can’t afford to have these lapses in concentration. I felt we should have had a penalty as well and that was frustrating. The ball did hit their player’s arm and even their assistant manager was worried a penalty was going to be given. We didn’t get the decision this time, sometimes they get given and sometimes they don’t, and we had to settle for the draw.

Watch: The best of the action against Lewes

So, a point away from home, some would say it’s a positive because the conditions were tough to play in at their home ground against a very disciplined and hard-working team. But for me, I’m disappointed because it was very evident, and I’m sure our fans who watched the game would say the same, that it was there for the taking. But another point is on the board, there’s a long way to go and we are still in a good place for what we want to achieve this season, which is winning this league and getting promotion. Other teams will drop points, but we have to make sure we don’t slip up and start picking up those points. We have to make sure we can control what we can and every single game now we have to be flawless with our performances in every moment of the game.

We have another tough week ahead with games in the space of a few days against Manchester City in the Continental Cup and then a big game against Sheffield United in the league, both at our home ground of Prenton Park. Firstly, we play Manchester City on Wednesday afternoon and first and foremost everyone in our club wants to congratulate them on winning the Women’s FA Cup on Sunday. It was a well-earned win over Everton after extra-time and a lot of their players had to play beyond the 90 minutes. That will be a challenge for them physically, but they’ve got such a strong, quality squad and they have players who can come in and freshen it up. It’s going to be a tough game for us but we know it always will be.

The girls did us proud in our 3-1 win against Manchester United in our opening game in the group and I couldn’t have asked for more. That was one of the best performances I’ve seen from this group. The problem for us was what happened after the United game. There was such a buzz amongst the club and our supporters, but we picked up a few injuries and then we went to Leicester City and lost the game. Some players had played three lots of 90 minutes in seven days, going from playing on a 3G surface to grass and then back to 3G, which is far from ideal. We were distraught after the Leicester game because we have high standards and expect three points from every game.

Highlights: The 3-1 victory over United

We host Sheffield United in the FA Women’s Championship on Sunday and that has to be our priority fixture this week because we need to get back to winning ways in the league. We can’t hide from the fact, it is a big game for us, it’s on our home turf and both teams will be fighting for the win. Against City, our fans will see us giving more young players an opportunity and it will be about developing and seeing how they get on with this challenge. I have a lot of faith in our young players and this will be a great occasion for them to play against some top players.

Finally, the government has announced another national lockdown from Thursday. Thankfully, we are still able to go ahead with the football and I know our fans are always with us even though we can’t have them back with us at this moment in time. It’s an uncertain time again and it’s tough for football fans because we are still not allowed to have them in our stadium. I know personally we have still felt their support from afar. It’s so important now we do what the government is saying and we do lock down. There’s been too many people losing lives and the spike is incredibly worrying. The biggest thing is, as much as we want fans in stadiums, we want them to be healthy first and foremost. The only way we will get our fans back in stadiums is if people do stay inside for now and support from afar and stick to the guidelines as much as possible. I wish everyone the very best of health and we hope to see you soon.

Kick-off at Prenton Park on Wednesday is 2pm GMT, with fans reminded that this is a behind-closed-doors game due to the continuing restrictions regarding COVID-19.