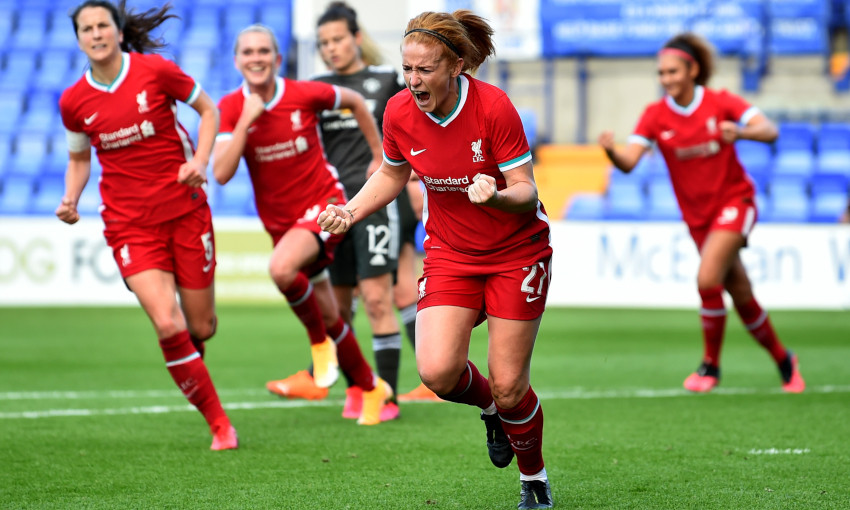 Liverpool FC Women came from a goal down to beat Manchester United Women 3-1 in their opening match of the Continental Cup on Wednesday.

Vicky Jepson’s side trailed in the Group C tie at Prenton Park after Abbie McManus put United ahead with a header the Reds argued came from an offside position.

But their reaction was outstanding and they overturned the scoreline against the Women’s Super League outfit with penalties in either half.

Rachel Furness stroked home the first to equalise before the break, and substitute Rinsola Babajide edged them in front when Jess Clarke was tripped.

An 83rd-minute header from Furness then added the icing to the cake for Jepson’s team and banked three points in a section also containing Everton and Manchester City. 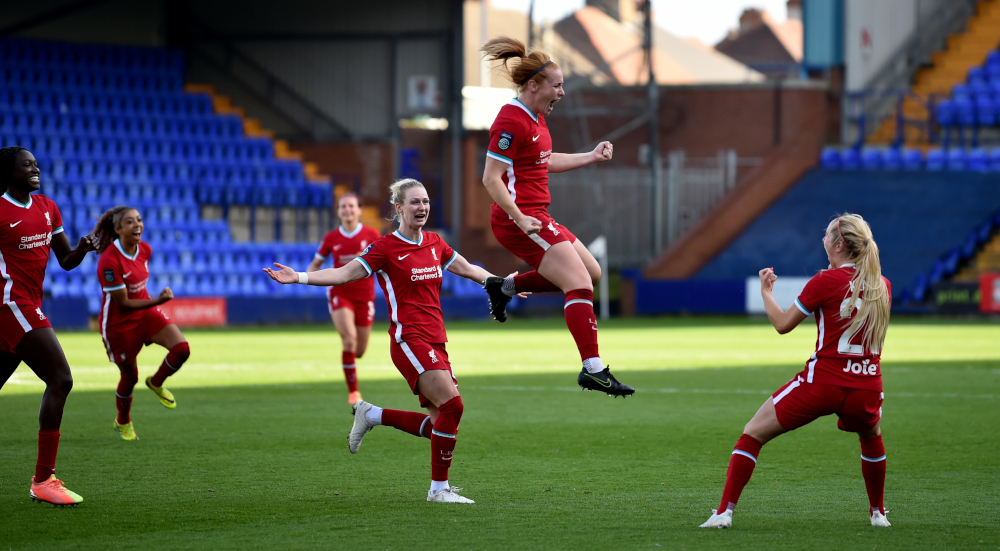 With only the group winners guaranteed progress to the competition’s quarter-finals, it was the ideal start for Liverpool and maintained their unbeaten run in 2020-21.

The visitors created the first clear opportunity of the game with just two minutes on the clock.

Ella Toone found space in the centre of the Liverpool area and fed a pass to her left for Tobin Heath, whose low attempt aiming for the near corner was smartly stopped by the feet of Reds goalkeeper Rylee Foster, making her competitive debut.

An even and entertaining ebb and flow ensued, before a flurry of opportunities included strikes at either end.

Heath had seen another chance come and go, her fierce drive from a similar position after moving past Rhiannon Roberts deflected over the crossbar.

But United did take the lead in the 28th minute from an incident that was fortuitous and, in the Liverpool players’ eyes, contentious.

From a corner cleared to the right edge of the area, Millie Turner’s skewed cross drifted to McManus, who clinically headed back across Foster inside the opposite post, though from what appeared an offside position.

The Reds shook off the frustration, however, and were soon back on level terms.

Taylor Hinds’ left-wing cross – which suddenly swung towards goal – had already forced a reaction save from United’s Emily Ramsey before the equaliser arrived.

Furness timed her run perfectly to meet a corner from the right with a close-range header that struck an opposition arm and prompted an immediate penalty decision. 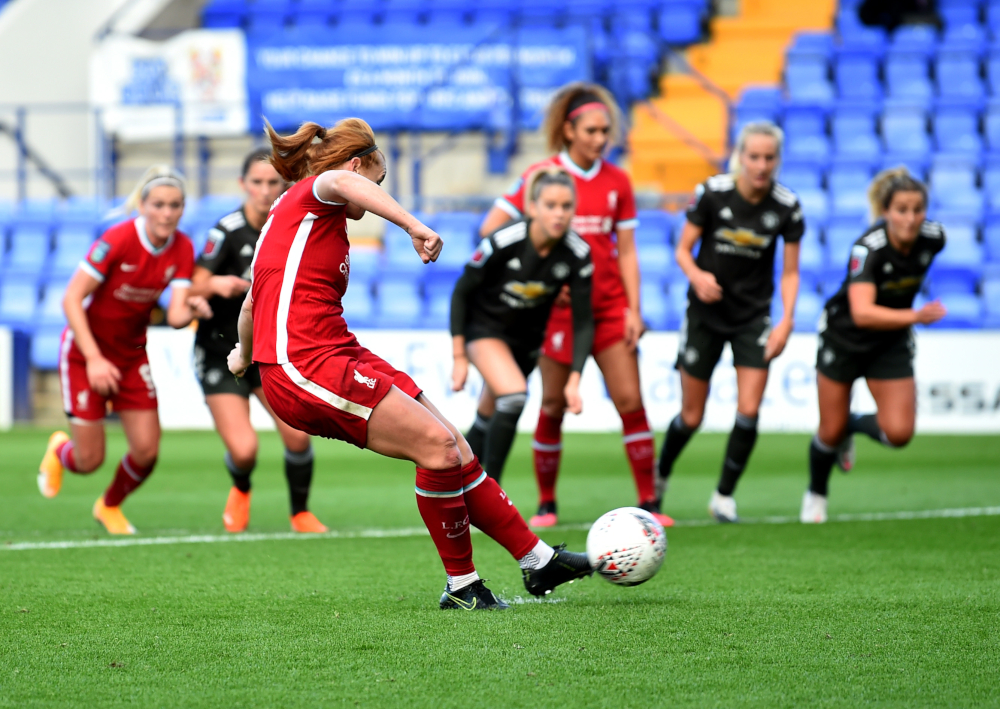 The No.27 stepped up from 12 yards herself and dispatched an excellent spot-kick into the right side of the net as Ramsey dived in the other direction.

Babajide was introduced for Amalie Thestrup in attack at the outset of the second half.

It was Casey Stoney’s United who went closest after the restart, though, as the influential Toone guided a looping effort onto the top of the crossbar.

Furness tried her luck from distance on the hour mark, having made ground with a strong run from deep, but it was too high to trouble the ‘keeper.

Liverpool instead sealed the comeback on 72 minutes and it was in no small part due to the industriousness and determination of Clarke.

The forward chased down Turner as she sought to shepherd the ball out of play on the byline and, having kept it in with a sliding tackle, was felled by the United player.

Babajide took responsibility from the spot on this occasion and emulated Furness’ composure by calmly slotting a left-footer into the bottom left corner. 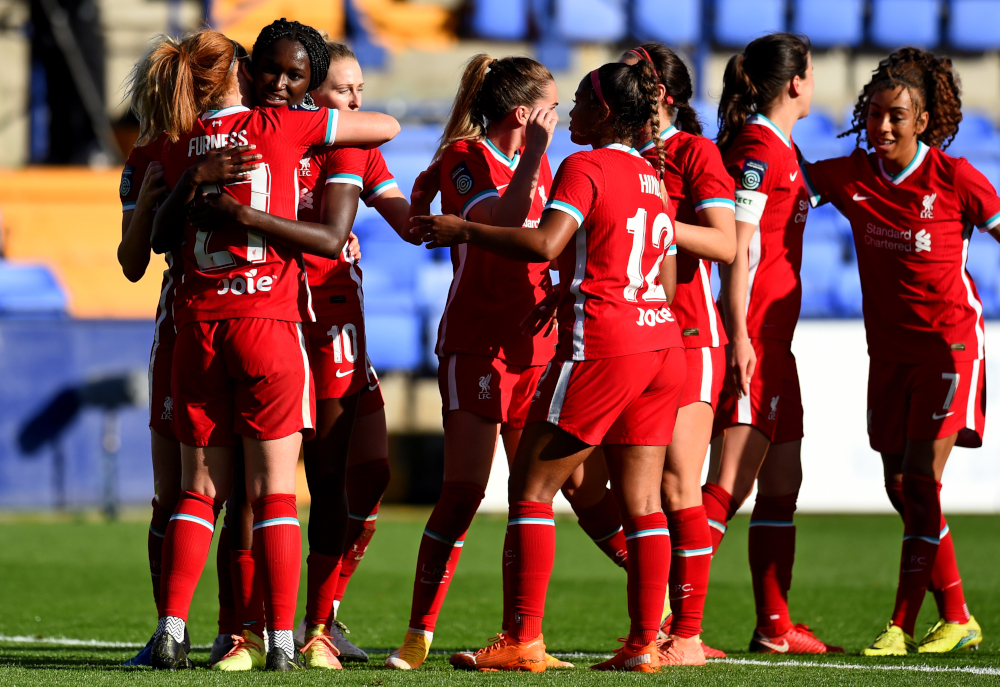 Roberts produced a vital block at the other end when Christen Press bore down and blasted at goal, while Babajide was thwarted by a last-ditch intervention shortly after.

But from the subsequent Liverpool corner, Missy Bo Kearns’ delivery to the back post found Furness, who lost her marker and powerfully nodded home to wrap up an excellent victory for the Reds.