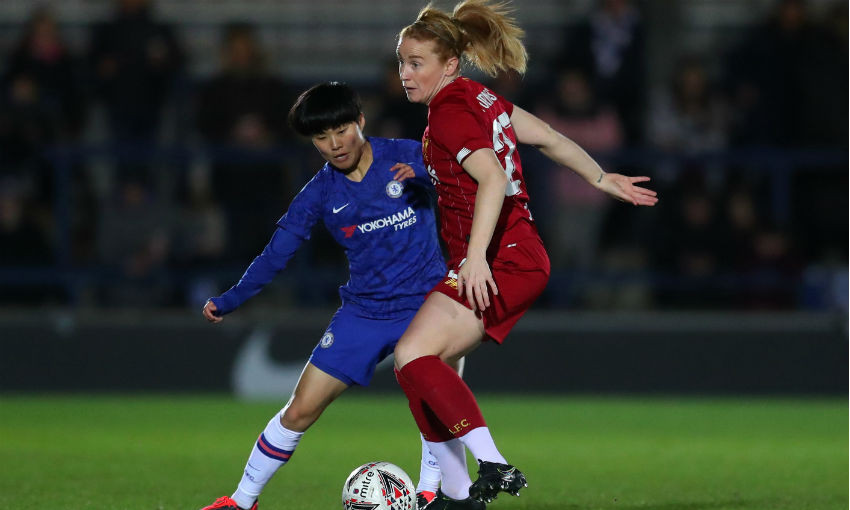 Liverpool FC Women were eliminated from the FA Cup with a 1-0 defeat to Chelsea on Monday night.

Guro Reiten’s 25th-minute goal proved the difference at Kingsmeadow and ended the Reds’ cup campaign at the fifth-round stage.

Solid defensive organisation from Liverpool denied Chelsea the opportunity to convert their early control of possession into anything more meaningful, although Anke Preuss saved from Ji-So Yun with her feet in the 19th minute.

Sophie Bradley-Auckland then cleared off the line from Reiten, but the Norway international put the hosts ahead midway through the first half with a back-post finish.

The Reds responded well to that setback, though, and a counter-attack involving Melissa Lawley and Niamh Charles nearly resulted in Ashley Hodson being found, only for Charles’ pass to be intercepted.

Midway through the second half, Charles’ touch took the ball away from her after Jemma Purfield had found Hodson with a direct pass over the top, with Magdalena Eriksson heading Purfield’s subsequent cross away.

Eriksson then nodded Maren Mjelde’s free-kick narrowly wide at the other end before Ann-Katrin Berger saved Charles’ powerful drive from range as Vicky Jepson’s side bowed out of the competition with a narrow loss.