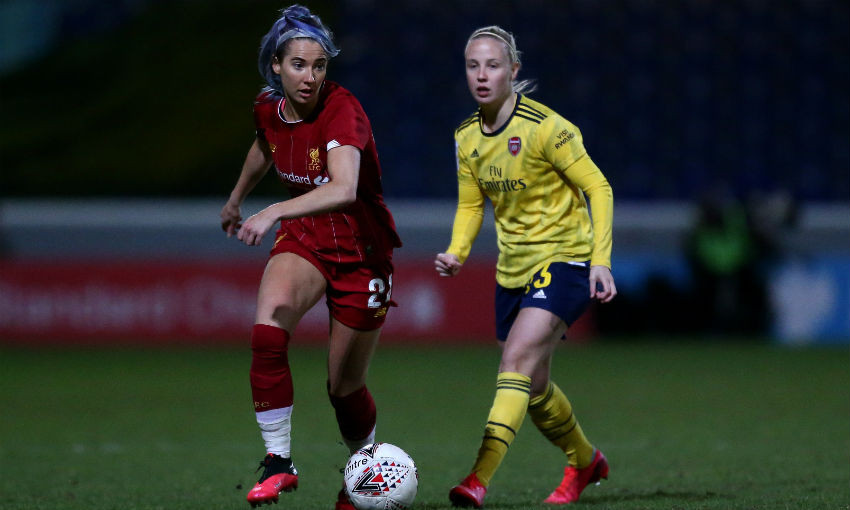 Vicky Jepson’s side took an early lead, later drew level after a Gunners double and were ultimately unfortunate not to take a point that their overall play certainly merited.

Instead it was the visitors who claimed all three as Netherlands international forward Vivianne Miedema – one of the most prolific strikers in women’s football – netted twice, including the winner.

Arsenal almost went in front after only 40 seconds but Anke Preuss produced a fantastic save to deny Jordan Nobbs from close range.

And despite the away team’s control of possession in the opening stages, it was Liverpool who scored first on 14 minutes.

A fine pass from Rachel Furness put Rinsola Babajide clear. The No.20 did superbly to hold off the defender and showed great composure to calmly slot the ball into the net.

The Gunners soon turned the game around, however, with two goals in the space of two minutes before the break.

Firstly, on the half-hour mark, Liverpool lost possession and Arsenal broke menacingly down the right. The ball fell invitingly to Miedema, who made no mistake from close range.

Nobbs then rose high to meet a left-wing cross with an unstoppable header to make it 2-1.

Five minutes from half-time, a fantastic last-ditch challenge by Niamh Fahey denied Lisa Evans as she almost broke free in the penalty area.

It was a pivotal intervention, because in stoppage time the Reds stormed back to make it 2-2.

A long pass from Niamh Charles was headed into the direction of Furness, who produced an emphatic finish with her left foot to give Pauline Peyraud-Magnin absolutely no chance.

Jepson’s side continued to compete strongly into the second half, with Babajide, Charles and Melissa Lawley posing a threat on the counter-attack.

Jade Bailey almost found the back of the net direct from a left-wing corner, meanwhile, but Peyraud-Magnin did extremely well to keep the ball out.

Arsenal were always dangerous when they got the ball out wide, though, and it was from one such moment that the winning goal arrived.

With 78 minutes on the clock, a right-wing cross found Miedema and she made no mistake with her header to snatch victory for the visitors.