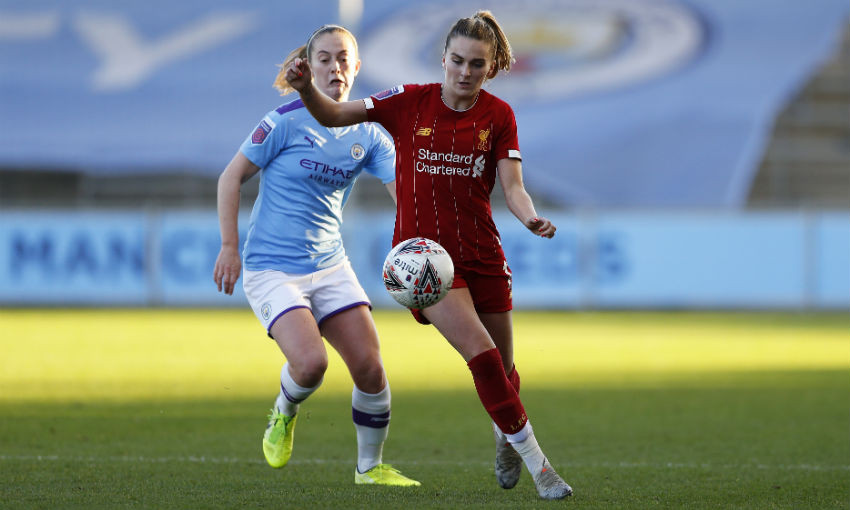 A spirited performance from Liverpool FC Women went unrewarded in a 1-0 loss to Manchester City Women on Sunday.

Former Reds captain Gemma Bonner headed in the only goal in the first half of the Women’s Super League match at City’s Academy Stadium.

Vicky Jepson’s side pushed hard for a leveller, particularly after the break, but were unable to find a way past Ellie Roebuck, who made several vital saves to ensure Liverpool returned to Merseyside narrowly defeated.

Anke Preuss was called into action early on, with the Liverpool goalkeeper’s superb reaction speed enabling her to tip Tessa Wullaert’s snap-shot over the crossbar after a City corner had only been partially cleared.

Courtney Sweetman-Kirk saw an on-target effort deflected wide when the hosts failed to deal with Becky Jane’s free-kick into the area, before impressive last-ditch defending from Reds skipper Sophie Bradley-Auckland prevented Lauren Hemp from having a clear sight of Preuss’ goal.

Preuss then diverted Ellen White’s drive wide as the home side sought a quick second, but the visitors hung in there and could have equalised just after the half-hour point.

Niamh Charles, making her 50th appearance for the club, earned a corner which Roebuck palmed away before also stopping Rhiannon Roberts’ follow-up attempt.

Preuss was required to tip a long-ranger from another ex-Red, Laura Coombs, wide in the opening stages of the second period.

But Liverpool grew into the half and twice had Roebuck concerned soon after.

First, Melissa Lawley’s cross - fashioned after she had beaten two City players down the Liverpool right - was spilled, only for the ‘keeper to gather at the second attempt, prior to Kirsty Linnett’s hit from distance causing Roebuck to scramble across her goal as it flew wide.

City substitute Georgia Stanway fired over the bar after latching on to Janine Beckie’s pass before a flurry of Liverpool attempts.

Bradley-Auckland dragged her shot wide after being fed by Lawley, with Charles subsequently flicking Roberts’ ball just off target with 13 minutes remaining.

A double save from Roebuck denied Jade Bailey from range and Niamh Fahey’s header from the resulting corner, and Fahey directed another corner wide in stoppage time of a closely-fought contest.