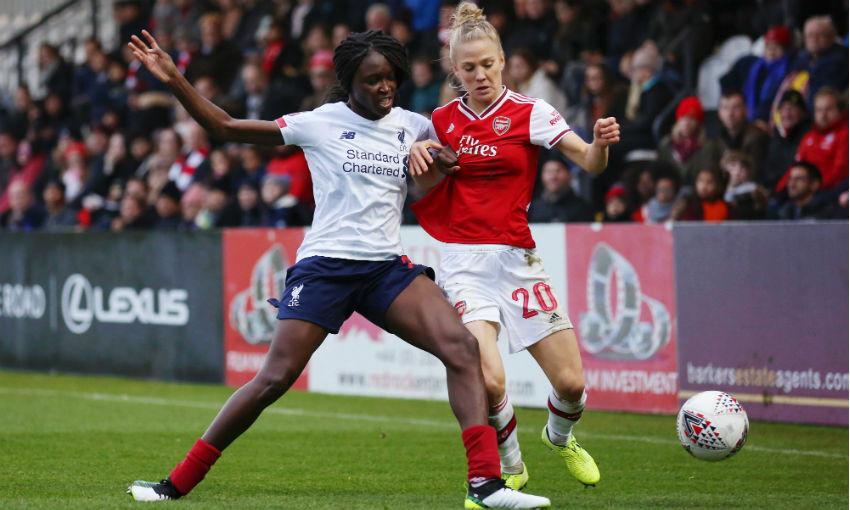 The Reds went agonisingly close to taking an early lead in the Women’s Super League fixture at Meadow Park, with Sophie Bradley-Auckland’s attempt being tipped onto the inside of the post by Manuela Zinsberger.

But it was Arsenal who edged in front as an even opening half an hour drew to a close, thanks to Vivianne Miedema’s clinical finish.

Vicky Jepson’s side then held firm in the face of steady pressure from the reigning WSL champions.

However, the Gunners’ dominance of possession and territory meant the visitors were unable to threaten Zinsberger’s goal in the second half and their wait for a first league win of the season goes on.

A bright start by Liverpool was very nearly rewarded inside the opening 10 minutes.

Becky Jane’s excellent free-kick delivery was met by Bradley-Auckland, but Zinsberger displayed impressive reflexes to divert the captain’s effort onto the woodwork.

Jepson’s team’s organisation and work-rate made it tough for Arsenal to hit their stride in the early stages.

The Reds’ efforts were undone by a moment of individual class from Miedema 28 minutes in, though - the striker bursting into the box and powering a shot into the far corner.

Both flanks were proving troublesome for Liverpool as the Gunners warmed to their task, and the hosts created – and spurned – two clear-cut chances to double their advantage prior to the break.

Arsenal continued probing for a second to seal all three points, and Leah Williamson rattled the crossbar from long range nine minutes after the restart.

Anke Preuss then made a fine save to deny Mead as the home side spent the remainder of the match on the front foot, albeit without breaking Liverpool down again.