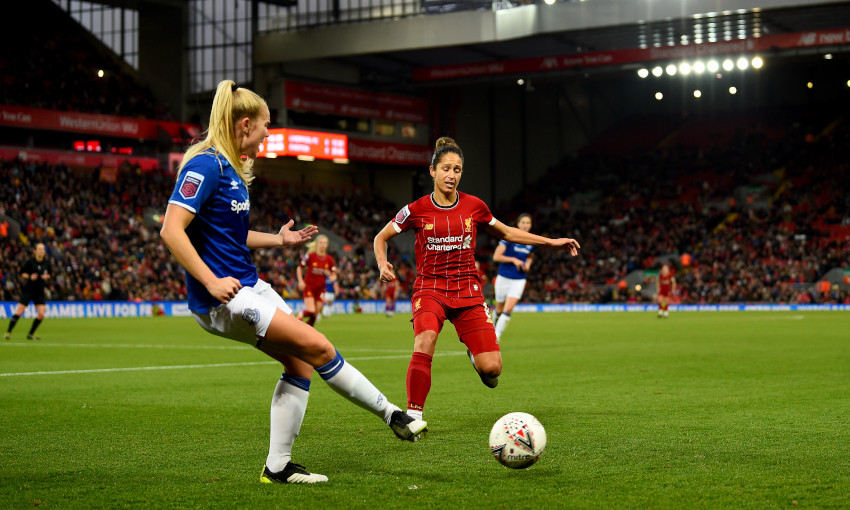 Liverpool FC Women were unlucky to be edged out 1-0 by Everton in Sunday’s Merseyside derby.

It was an historic afternoon as a crowd of 23,500 turned out to witness the first Women’s Super League match ever to be held at Anfield.

The Reds produced a determined performance worthy of the occasion but were unable to take their chances and were punished by the visitors.

Blues captain Lucy Graham put her side in front at the very end of a first half the home team had dominated for the most part, a strike from distance fumbled in by Anke Preuss.

And it proved the winner for Everton despite Liverpool’s constant push for an equaliser.

Liverpool made a positive start to the contest, with Niamh Charles’ willingness and ability to carry the ball from deep a clear spark for the home side.

Melissa Lawley drew a save from Tinja-Riikka Korpela when she drove at goal from distance in the second minute, after one such Charles drive into Everton territory.

On the quarter-hour, Korpela had to produce a stunning save to keep the Reds out.

Courtney Sweetman-Kirk twice kept a deep free-kick to the left side of the area alive and Kirsty Linnett angled her body brilliantly to flick a header on course for the bottom right corner – until the Everton goalkeeper, somehow, stretched to claw the ball away.

Liverpool were controlling possession and always looking the likelier to open the scoring, Linnett slicing a 20-yard shot wide as half-time neared.

Reds midfielder Rhiannon Roberts went closer still, four minutes before the break, her hit from even further out just about pushed away from goal by Korpela.

But after 45 minutes of encouraging football from Vicky Jepson’s team, it was the visitors who got themselves in front in first-half stoppage-time.

Graham tried her luck from around 25 yards and Preuss made an unfortunate error to spill the ball inside the right post and hand Everton a surprise lead.

The hosts warmed to their search for an equaliser as the second half wore on and Liverpool boss Jepson opted to reshuffle her attacking system before the hour mark.

Rinsola Babajide replaced Sweetman-Kirk and took up a position on the left wing with a view to exploiting her pace and dribbling talent against the Everton backline.

Babajide sprinted past two Blues players on the flank and guided in a low cross that met Charles’ infield run – but Danielle Turner made a vital last-ditch block.

Another chance came Charles’ way 10 minutes from time as Roberts broke in behind the defence and squared to the 23-year-old in the box. Her shot on the turn flew over, however.

Everton might have sealed victory in stoppage-time, a counter-attack seeing substitute Hannah Cain sweep in a brilliant cross to the near post, where Roberts recovered to prevent Molly Pike from tapping in.

But there was no time left for Liverpool to respond and Jepson’s charges left the Anfield turf with pride rather than points from a special day at the stadium.