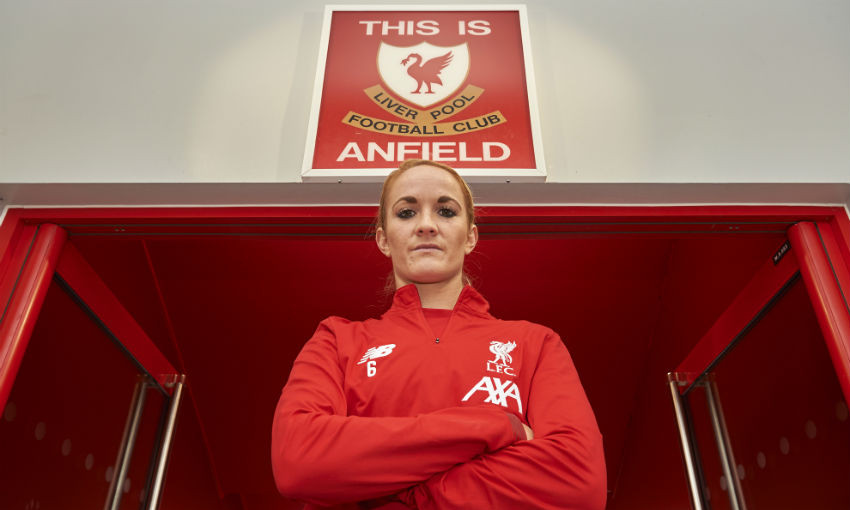 Liverpool FC Women’s captain Sophie Bradley-Auckland feels ‘honoured’ to be preparing to lead her team out at Anfield in Sunday's Merseyside derby clash with Everton.

The game will be the first Women’s Super League fixture ever staged at the Reds’ home ground.

It marks yet another milestone for Bradley-Auckland, who has overcome severe injury problems in her career to emerge last season as an ever-present for Liverpool Women and the winner of the Players’ Player of the Year award.

While team results have not been what was hoped this season, Bradley-Auckland has been her normal dependable self at the heart of the defence and she was recently a finalist for the Northwest Women’s Footballer of the Year award.

“It will be a massive honour to lead the girls out but just to play at Anfield is amazing,” she told Liverpoolfc.com.

“It means so much to so many of the players because we not only play for Liverpool but we support Liverpool as well and what better game than a derby.

“Whenever you play in a derby there’s always that extra bit of fight and energy going round the pitch and it’s always a different buzz so it’s a fantastic that this game will be played at Anfield.”

Looking back to her long road back from injury, Bradley-Auckland feels occasions like Sunday’s have made everything worthwhile.

She added: “It definitely has paid off. I’m super proud, just to be back playing football for me is a massive thing and then to have had a decent season here at Liverpool last year means the world to me and my family.

“It’s a huge honour for all the girls to think we can play here and for it to be happening means so much.

“It took everyone’s breath away a bit when we heard because that’s how much it means to us.”

Liverpool FC Women take on Everton at Anfield at 3pm GMT on Sunday. All available seats for Sunday's game have now been sold or allocated. There will be NO tickets available to buy at Anfield on matchday.