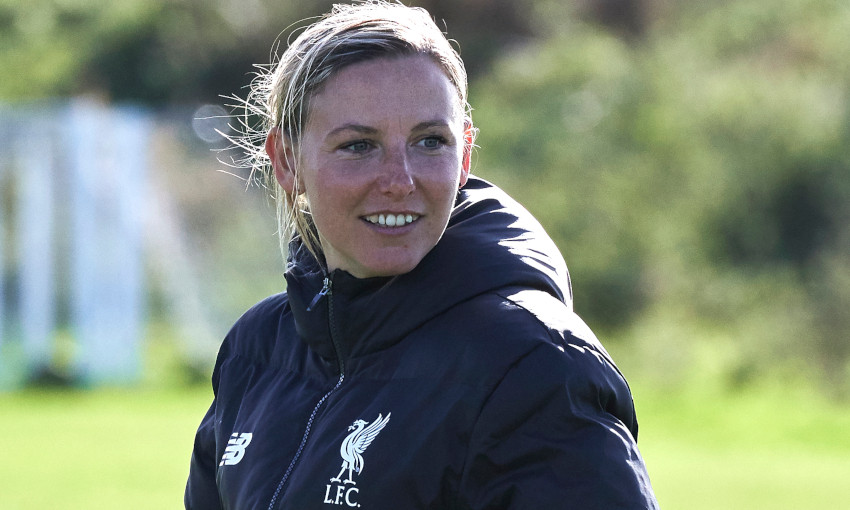 Ahead of Sunday's Merseyside derby at Anfield, Liverpool FC Women manager Vicky Jepson gives us a guide to her squad.

The Reds will host Everton at 3pm GMT as part of the FA's Women's Football Weekend during the men's international break.

Sunday's showdown represents a first opportunity for LFC Women to play a league fixture in front of the Kop.

To preview the milestone moment, Jepson provides an extensive lowdown on the players aiming to make the occasion a victorious one... 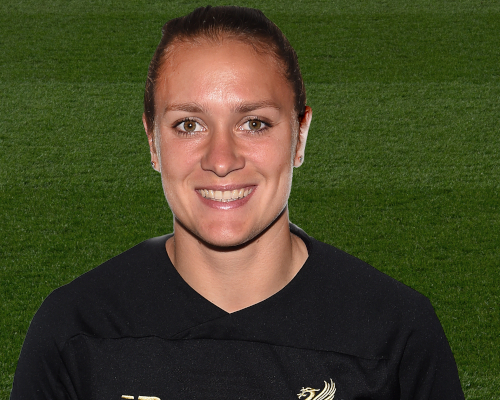 A German goalkeeper, Anke is experienced and last month won our Standard Chartered Women's Player of the Month, which was well deserved. She made some really important, big saves for us and continues to do so. This is Anke's second season with us and she has come on in leaps and bounds. She is an integral part of the team who always gives 110 per cent in the training sessions. We also often find her being top of the fitness tests amongst the whole squad. 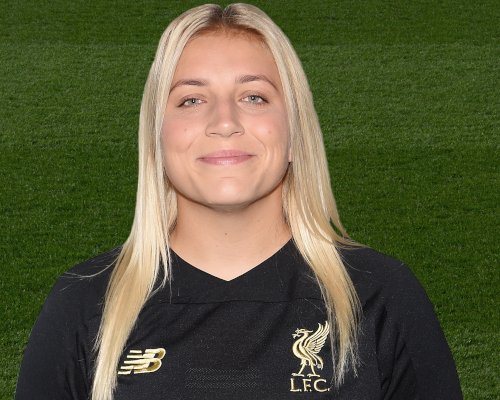 Fran is a bubbly character who is loved by all. She is a social butterfly who certainly keeps the positivity high throughout the camp. She works tirelessly hard and whenever she has been asked to step up and take the No.1 shirt she has certainly delivered for us and never let us down. She is still young with a lot of potential. 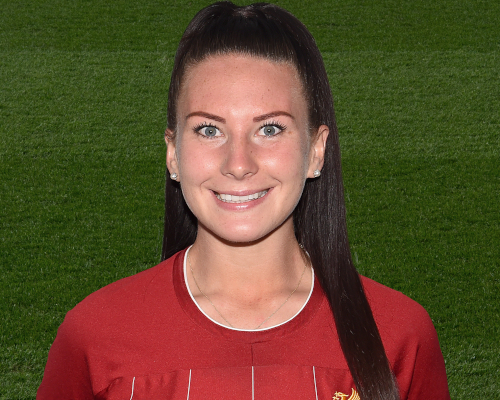 This is Leighanne's second season at the club. She played at full-back for us last season and really showcased that she deserves to be playing in the Women's Super League. She improved week in, week out and this season she has also been covering the centre-back position for us when Niamh Fahey has been unavailable. She is a versatile defender and also a very powerful and athletic defender that can get forward to attack and she is also really quick to recover. 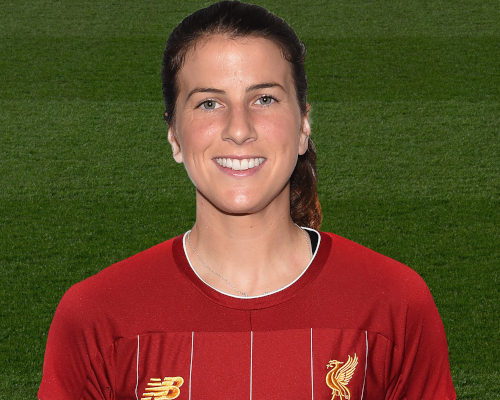 Niamh is our vice-captain and an Irish international. She has great pedigree with the experience of playing for Arsenal and Bordeaux. Niamh is a leader who drives her standards high but also knows when to have fun and keeps our training sessions fun with the banter. She is loved by all and on the pitch she is a catalyst who drives us forward and she is not scared of putting in a good tackle when it needs to be done. 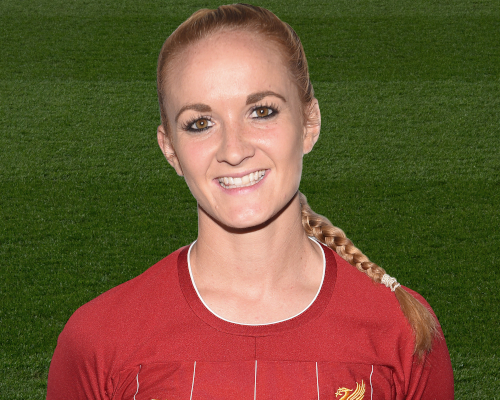 Sophie is our captain and the mother of the team. She is also an inspirational motivator of the team. She played in the Team GB squad for the 2012 Olympics and has been involved in the international set-up with England. She has been through many lows in her career but tough times don't last forever, tough people do. Sophie is a tough character in the dressing room and on the pitch and you often see her saving the team with last-ditch tackles. Her emergency defending is one of the best I have ever seen in the Women's Super League and she is a fantastic captain for us to drive us forward. 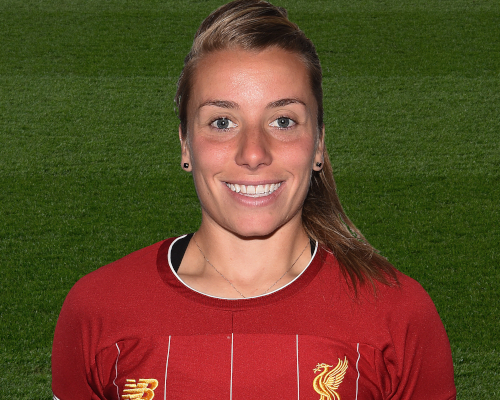 Our new summer recruit from Reading, Becky has certainly added strength to our back four. She is an attacking right-back who has got frightening pace. She is technically very gifted and she can retain the possession for us. It's very rare a winger will get the better of her and even if they do get past her, she has got the pace to recover and cut out the danger. 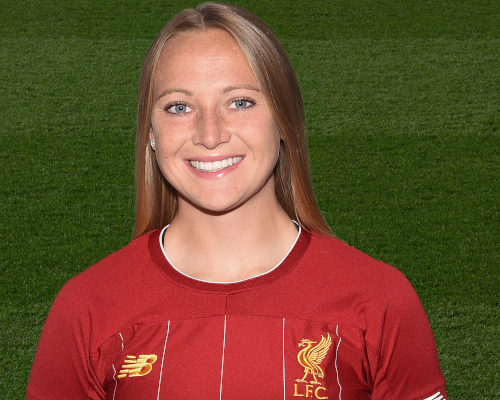 We signed Jemma last season and she did a fantastic job at left-back. She has stepped up and played in big games and has got an assist this season with a great cross for Niamh Charles in the Sheffield game. I'm sure we will see a lot more from Jemma this season. 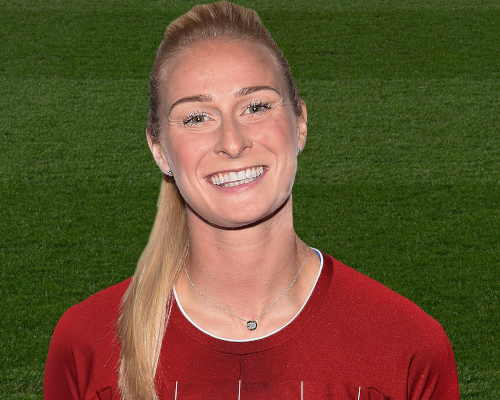 Razza is a Wales international with lots of experience. She plays with her heart on her sleeve and is not scared of a feisty tackle to break up the play. She is full of energy in midfield and a great leader when it comes to set-pieces. 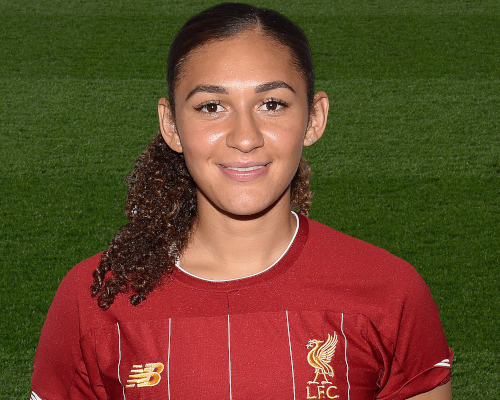 Jade is a young midfielder who came to us with a fantastic pedigree having been at Chelsea and Arsenal. She had a little setback with a knee injury but she is now back to full strength. She is a playmaker who looks to get on the ball and serve the forwards as much as possible. We have seen another side to her game this season when she breaks up the play for us and brings energy to our midfield. 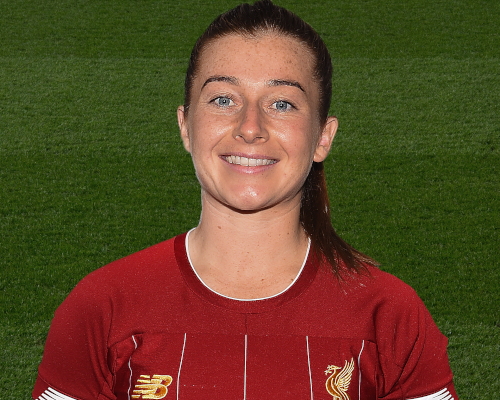 It's great to have Christie back from injury and she can be a key player for us. A Scotland international, Christie can play as a holding midfielder or as an attacking player in the No.10 role. She is a set-piece master for us and last season she got a hat-trick of assists in our derby win over Everton. Christie was part of the Scotland Women's squad for the World Cup and she did a fantastic job representing her country. 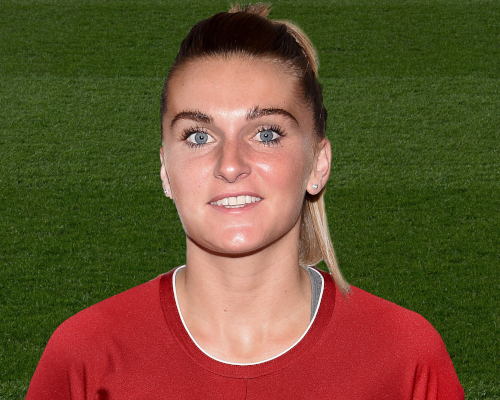 Our summer recruit from Manchester City, Mel has already made a big impact for us. She is a senior Lioness having been in the England squad. She is still young but has got huge potential, which we have seen in some of our games so far. I'm still excited to see what more we can get from Mel because she certainly has the ability to be a match-winner. Mel is a dribble driver and she is capable of shooting from long range, although we haven't seen that yet, hopefully we might do on Sunday. She is a magician in the final third, she loves to take on defenders and get good crosses into the box. 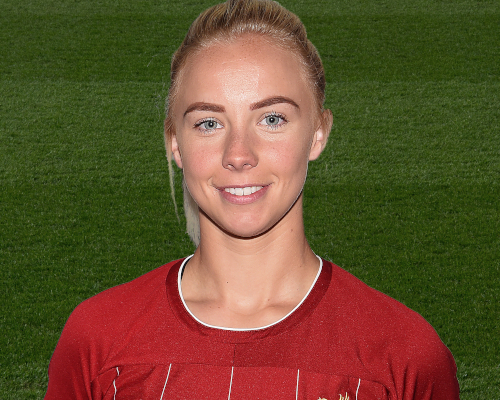 Ash returned from a long-term injury towards the end of last season. She did fantastic for us in the pre-season. She can play anywhere across the front three and has a lot of pace that can cause opposing defences a lot of problems. She works tirelessly hard every single day in training. 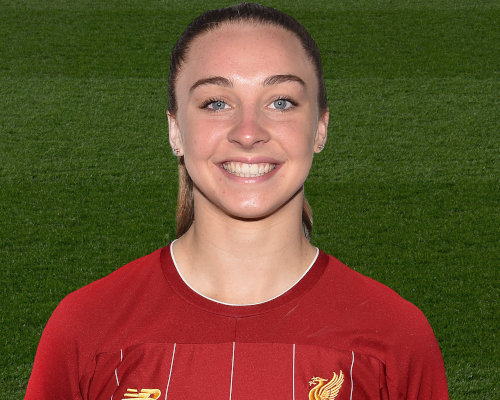 Niamh is a very talented player who I have worked with for a number of years from when she was coming through our development teams. One of our home-grown players who I am very proud to have seen grow to be a key player for us in the Women's Super League. She has got so much potential and she can be a full-back's worst nightmare. She is just as comfortable playing on the right and the left, and can score goals. I'm sure we will see more goals and more assists from Niamh this season. 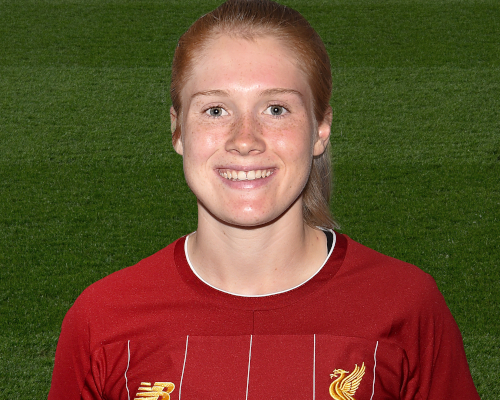 Amy is another talented youngster who has stepped up from our U21s. Last season she won the fans' Player of the Year, which was well deserved. She really grew as a player and took the opportunity when injuries in our squad gave her that chance. Amy played in the Euros for England U19s during the summer. She hasn't had much of a break, to be honest, but she works tirelessly around the clock every day in training to make sure she is a better player than she was the previous day. She has a great attitude. Amy also balances between a healthy education at university alongside that. 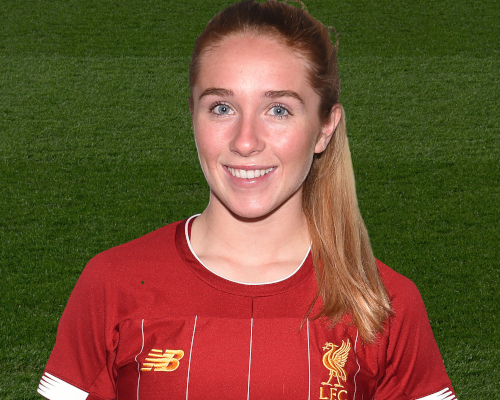 Missy Bo has been at the club since she was eight and I know being a lifelong Liverpool fan how excited she is to be involved at Anfield. Personally, I have grown with Bo on her journey as well as mine. She is a midfield player who can play in the No.8 role and is a box-to-box player. She is still obviously learning her trade at senior level but she can make an impact for us. 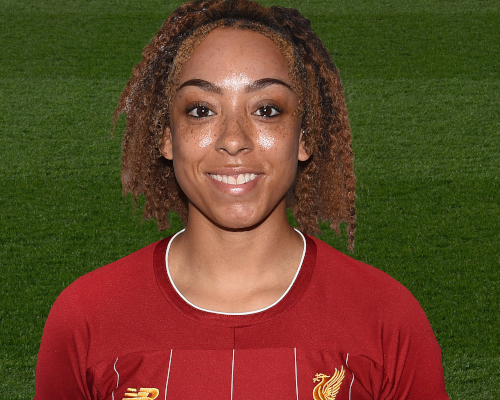 Jess is an experienced senior player who has been involved with England. Jess is a wide player and she has got good pace. We rely on her to provide opportunities for us to score with her crosses from wide positions and she can also cut inside. It's great to have Jess back because she missed a lot of football last season after having a knee operation. 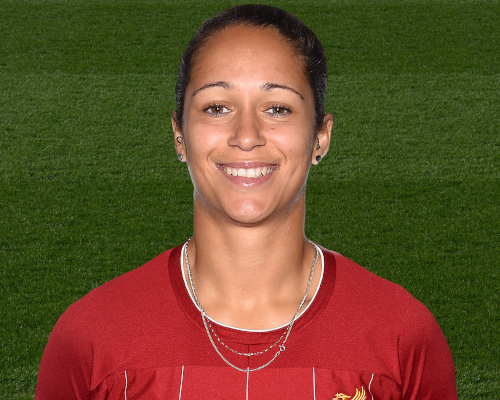 Courtney was our top goalscorer last season. Although she hasn't scored yet this term, I'm certain it won't be long until she is back on the goal trail, hopefully this Sunday at Anfield! She leads our press superbly well out of possession and I don't think there are many No.9s that can show the passion to want to win the ball as much as she does. She brings a real energy up there and links the play really well. 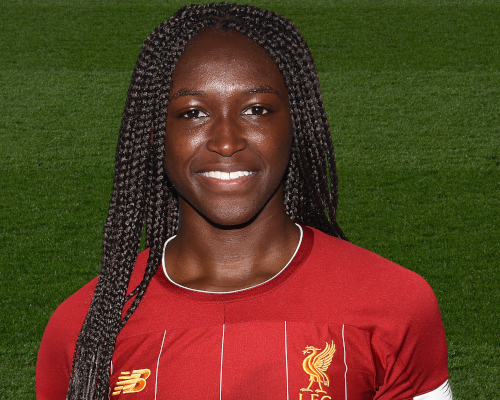 Rinsola has frightening pace and she is one of the quickest players in the Women's Super League. She has pace and power going forward, she is very direct and has a wand of a left foot. I'm excited to see her play at Anfield and hopefully she can get a goal and an assist for us. 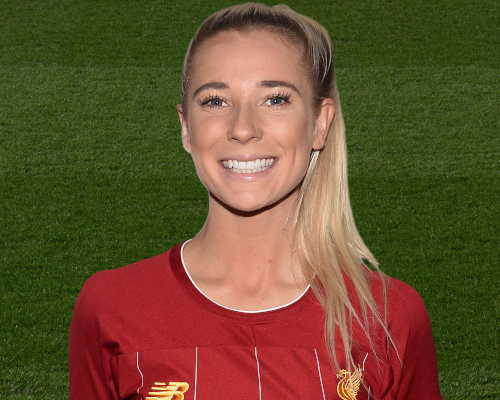 Kirsty has found herself back in the squad but in a new role now as a No.10. Last season she played as a No.9 but had a few injuries. Kirsty can certainly play in the No.10 position and she is very good at playing in the pockets and linking up the play. She got a hat-trick recently against Coventry. What I want to see now is her develop and blossom and really nail down her role and responsibility as our No.10.