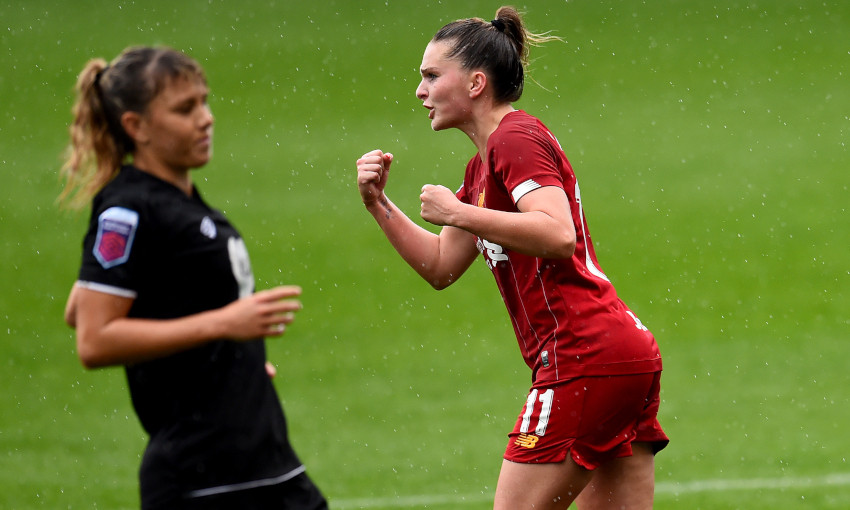 Melissa Lawley netted her first goal for Liverpool FC Women in a 1-1 draw with Bristol City FC Women at Prenton Park on Sunday.

It was a welcome first point of the season in the Women’s Super League for Vicky Jepson’s side following three straight defeats.

The visitors had taken the lead in fortunate circumstances when a cross from Ebony Salmon found its way into the net, but Lawley kept her cool to equalise from the penalty spot.

Jepson’s team made a bright start to the game with Lawley, Niamh Charles and Jess Clarke causing plenty of problems for Bristol City, while Rhiannon Roberts was dominating the midfield with her battling qualities.

And it was against the run of play when the away side took the lead after 15 minutes.

Salmon found space on the right flank and her attempted cross flew over the head of Anke Preuss and into the top corner of the net.

The advantage could easily have been doubled a minute later as a mix-up between Leighanne Robe and Niamh Fahey let in Salmon, who could only send her effort into the side-netting.

The Reds came so close to levelling the score on 21 minutes and what a goal it would have been.

Lawley beat three or four defenders down the left and, as she cut inside, her attempted curler seemed destined for the top corner, only for Sophie Baggaley to produce a magnificent save to keep it out.

Five minutes later, Clarke came close to replicating Bristol City’s opener when her cross from the right sailed just over the top.

Jepson’s side went close again after the restart - a Jade Bailey corner from the right was eventually cleared after a scramble in the six-yard box.

Within a minute of her introduction, she won the hosts a penalty.

Clarke did brilliantly to hold the ball up and when it came to Babajide down the left, she sped beyond full-back Loren Dykes, who left a trailing leg and conceded a spot-kick.

Lawley, who featured for England in midweek, stepped up to draw the Reds level with her first goal for the club.

Babajide continued to cause Bristol City plenty of problems on the flank with her direct style and willingness to run at defenders.

On 75 minutes, the Reds No.20 beat Dykes along the left and her inviting cross was hacked away from the goalline by ex-Red Jasmine Matthews.

Jepson’s charges could not find a winning goal but there were plenty of positives for the manager to take from this encouraging performance.