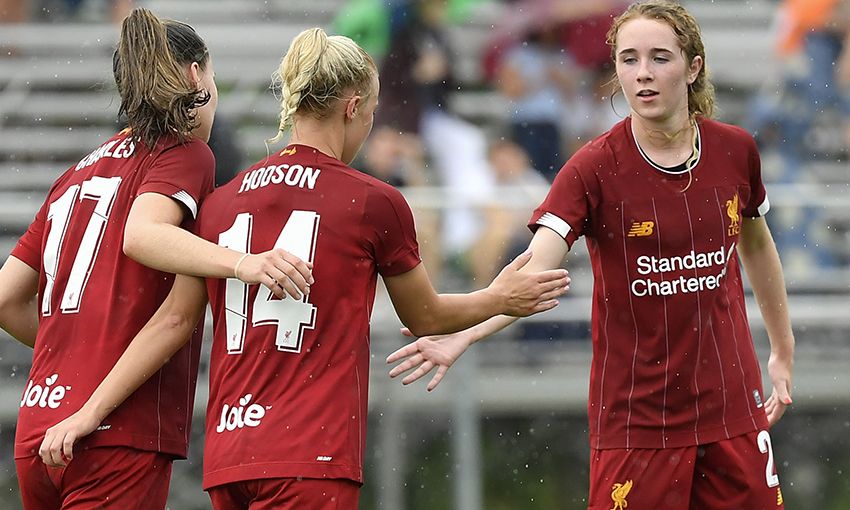 LFC Women look to gear up with new partners

Courtney Sweetman-Kirk headed in a late equaliser as Liverpool FC Women kicked off their pre-season tour of the USA with a 2-2 draw against Cleveland Ambassadors at Notre Dame University on Thursday.

The forward, who ended last season as her side's top scorer with 12 goals in all competitions, applied the crucial finish after a stunning run and cross from debutant Melissa Lawley.

Ashley Hodson had netted for the Reds in the first half to cancel out Catarina Macario's early opener for Cleveland, who took a 2-1 lead when Sophia Smith netted two minutes before the break.

The Reds' comeback and the continued goalscoring exploits of Sweetman-Kirk will be pleasing for manager Vicky Jepson, but the performance of new signing Lawley from Manchester City and her willingness to take on defenders and cause havoc on either flank was particularly noteworthy.

The 24-year-old showed superb pace to latch onto a ball over the top and drilled a low right-footed finish past the goalkeeper to make it 1-1 with 10 minutes on the clock.

Teammate Rinsola Babajide then went close to putting the Reds in front but her left-foot shot flew inches over the bar. The LFC forward then embarked on a brilliant run to set up Hodson, but this time her fellow attacker shot over from close range.

At the back, Reds goalkeeper Anke Preuss made a stunning point-blank save to deny Smith, while centre-back Sophie Bradley-Auckland was called into action to make two goal-saving tackles.

However, with half-time looming, Cleveland's Smith eventually find a way through when she cut in from the left and beat Preuss with a great finish to put the American side 2-1 up.

Jepson made three changes at the break, including the introduction of Sweetman-Kirk, but it was fellow substitute Fran Kitching who was first to make her presence felt as the goalkeeper was forced into a great save off a low shot that looked destined for the bottom corner on the hour mark.

Two minutes later and the Reds were unlucky not to equalise. Leighanne Robe delivered a brilliant cross from the left and Niamh Charles rattled the crossbar with a header.

The match could have swung Cleveland's way when a clearance fell straight to Macario, but Kitching recovered to make a great save from her 40-yard effort.

Liverpool would have the final say, though, when Sweetman-Kirk headed in on 83 minutes and ensured the Reds' pre-season got off to an unbeaten start.