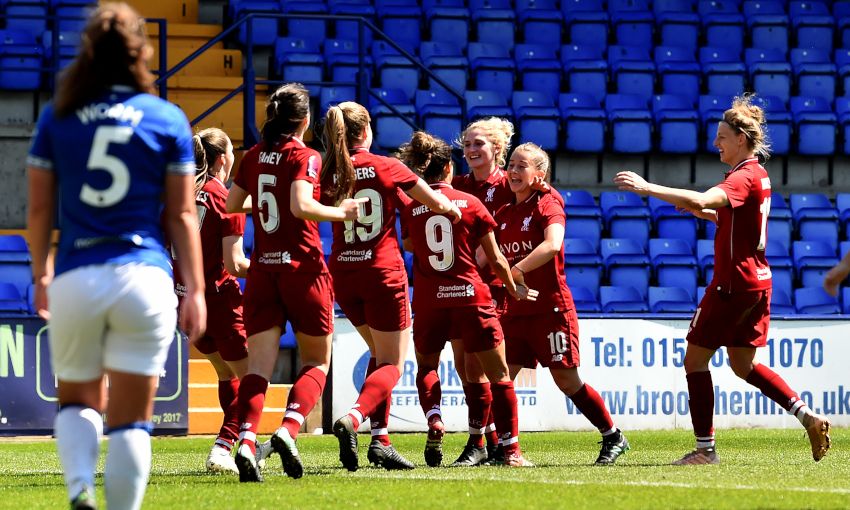 Liverpool FC Women signed off their league campaign with a 3-1 victory over Everton Ladies in their Merseyside derby on Saturday.

Vicky Jepson’s side produced a confident performance at Prenton Park on their final outing of 2018-19 and won through first-half goals from Courtney Sweetman-Kirk and Niamh Charles, and Amy Rodgers’ late third.

The Reds were already assured of an eighth-place finish in the Women’s Super League regardless of the result, but will be buoyed by a positive conclusion to a difficult season.

In front of a crowd of 1,842, Liverpool made the brighter start in the derby but it was the Blues who first went close, Angharad James’ drive from 25 yards flying the wrong side of the left post.

Next, on 16 minutes, Laura Coombs tried her luck from distance and was desperately unfortunate to see a fantastic hit on the bounce drop down onto the crossbar and out.

But the Reds were to strike decisively with two goals in five minutes later in the half.

Both were sourced from Christie Murray set-pieces, the first after an angled delivery into the Everton area reached Sweetman-Kirk ahead of the goalkeeper to send a header into the empty net.

And it was 2-0 on the half-hour; a similar Murray free-kick caused confusion in the opposition box and when the ball ran loose, Charles coolly dispatched it to double Liverpool’s lead.

Jepson’s charges had made most of the running in the first half but the visitors changed the complexion of the contest six minutes before the break.

The Reds were unable to clear a dangerous corner in from the right flank and Abbey-Leigh Stringer capitalised with an emphatic low finish through the bodies between her and goal.

Charles might have restored her side’s two-goal advantage with the final opportunity of the half, only for Kirstie Levell to repel her clipped shot towards the right corner.

Everton pressed for an equaliser right from the restart, making for more of an end-to-end encounter, though a fine save was needed to deny Liverpool a third.

Space opened up for Coombs through the centre and at the second attempt to dig out a low shot, the midfielder was thwarted by the diving Levell to her left.

Rinsola Babajide, sent on at half-time, was a constant threat to the away team with her pace and dribbling ability along the left, though she was unable to carve out a clear chance until the 87th minute.

Then, her latest sprint down the channel and cross-shot drew a crucial save by Levell – and from the subsequent corner Liverpool sealed three points.

Murray’s flighted delivery was flicked on at the near post and found Rodgers at the back stick to convert from close range and sign off the season in excellent fashion.