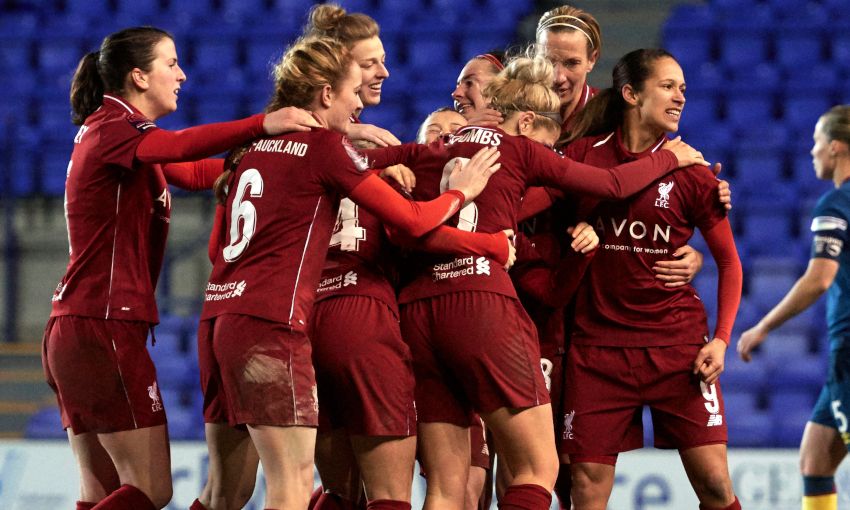 Courtney Sweetman-Kirk netted the only goal of the game as Liverpool FC Women edged out West Ham United 1-0 at Prenton Park on Monday night.

Backed by their vocal, loyal supporters, Vicky Jepson’s side, missing injured duo Jess Clarke and Jasmine Matthews, gave it everything to claim a vital three points in the Women’s Super League.

In the opposite dugout was Matt Beard, the man who previously led the Reds to successive league titles.

In a fairly even opening half Belgium international Yana Daniels went close for the Reds when she fired an effort from 30 yards out over the bar.

On 25 minutes, a pinpoint free-kick delivery from Laura Coombs found Leandra Little, who climbed high but saw her header sail over the top.

The Hammers then carved out a great chance; Adriana Leon found space inside the penalty area but Reds skipper Sophie Bradley-Auckland came to the rescue with a brilliant last-ditch challenge.

The Reds thought they had scored on 39 minutes when a spectacular strike from Coombs came back off the bar, bounced down and looked to have crossed the line, but - despite strong appeals - the referee ruled the effort out.

Jepson’s side took the lead three minutes after the restart, though, and it was a superb team goal.

A perfectly orchestrated pass from Bradley-Auckland picked out the run of Coombs down the right, who crossed perfectly to Sweetman-Kirk and the in-form striker drilled the ball into the back of the net for her ninth goal of the season.

Beard’s team fought hard for an equaliser but whenever they carved out a chance they found Liverpool stopper Anke Preuss in unbeatable form.

First, the goalkeeper palmed away a goalbound drive from Leanne Kiernan, and two minutes later she made an even better stop to deny Alisha Lehmann.

Lucienne Reichardt then volleyed just over the top as the Hammers went close - but the Reds held on to claim a vital three points.