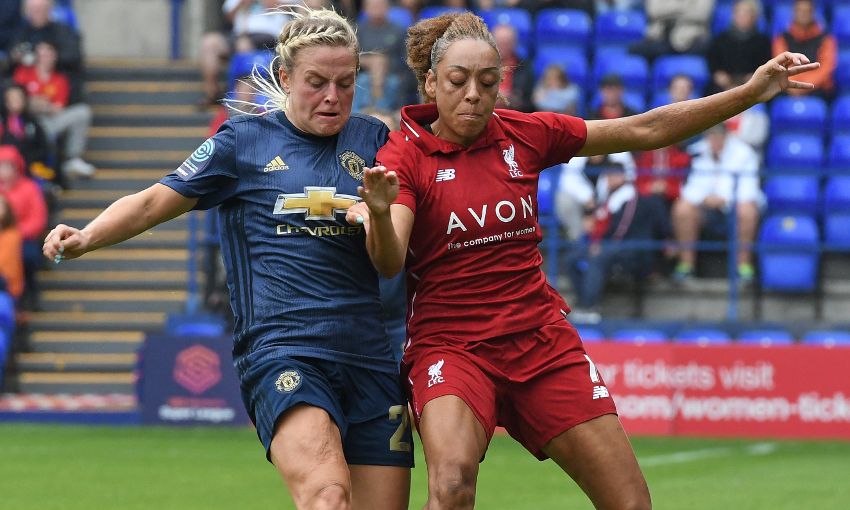 There was frustration for Liverpool FC Women as they lost 1-0 to Manchester United Women in the group stage of the Continental Tyres Cup at Prenton Park on Sunday.

A goal in the 83rd minute of the game was enough to give former Red and United boss Casey Stoney a win in her first outing as a manager.

Liverpool manager Neil Redfearn fielded eight debutants while United had five ex-Reds in their starting XI, and the hosts made a bright start.

A surging run down the right flank from Satara Murray saw her cross find Leighanne Robe at the back post, but the left-back fired just wide.

On 27 minutes only a fine last-ditch challenge from ex-Red Amy Turner denied debutant Kirsty Linnett from opening the scoring, then a cross from Murray was fired across the face of goal with nobody able to pounce.

New Reds stopper Anke Preuss was outstanding on her debut. The German did brilliantly to stretch and keep out Alex Greenwood's free-kick then, on the stroke of half-time, a pass from Lizzie Arnot put Jessica Sigsworth clean through but Preuss denied the United No.9.

Redfearn's charges started well in the second half, too. On 54 minutes Laura Coombs exchanged passes with Jess Clarke before firing an effort just over the bar.

Four minutes later Courtney Sweetman-Kirk, a lively figure from the Reds' bench, was unlucky to see her effort well saved by Siobhan Chamberlain.

Liverpool continued to take the game to their opponents with new No.10 Christie Murray a prominent figure with her passing and vision.

Preuss was then called into action again on 73 minutes with another superb save at close range to deny Leah Galton.

A fine pass from Robe then set Sweetman-Kirk racing clear down the left, but as she advanced into the penalty area her effort was deflected just past the post.

The winning goal arrived seven minutes from time. Former Red Greenwood stormed forward down the left flank and produced a superb low cross which was touched home by Arnot.

Liverpool came so close to salvaging a draw when lively substitute Yana Daniels won a free-kick just outside the penalty area.

Murray stepped up and saw her effort beat Chamberlain but strike the post, before the ball rolled agonisingly across the goalline and away to safety.