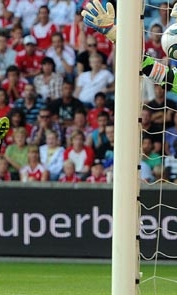 Goals from Andy Carroll and Daniel Agger (2) secured a 3-3 draw with Valerenga as grief-stricken Oslo hosted our penultimate friendly ahead of the 2011-12 campaign.

Early strikes from Lars Iver Strand and Fegor Ogude put the Norwegian side ahead but Liverpool clawed it back to lead 3-2 before a last-gasp goal from Mohammed Fellah gave the home side a share of the spoils.

Kenny Dalglish can take the return of Agger, Glen Johnson, and Pepe Reina as positives, while Stewart Downing's delivery was impressively accurate, notably in assisting Carroll's goal just before half-time.

A header from Agger levelled proceedings before the centre-back netted again late on to give the Reds what seemed set to be a hard fought victory - but it wasn't to be.

The game was preceded by a stirring rendition of You'll Never Walk Alone, the lyrics of which have rarely sounded so poignant following the death of 77 people here in last month's terrorist attacks. The teams then made their way onto the pitch wearing black armbands and, after a minute's silence, every Liverpool player carried a solitary flower to the Valerenga end - a touching show of unity from a football club all too aware of its sizeable fanbase in this part of the world.

Then to the football. Liverpool immediately looked sharper than previously witnessed in pre-season, with Downing wandering down the right and Charlie Adam tucked in on the left. 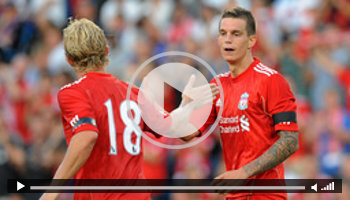 Johnson was first to create a goalscoring opportunity on his comeback from injury, darting to the byline and forcing a corner. Downing's delivery was tempting but neither Johnson, Agger or Carroll could make a connection.

Next Downing cut inside to launch a low drive just wide of Lars Hirschfeld's goal.

A promising start, then - but Liverpool's defence was caught cold on 15 minutes when Yssouf Kone squared into the box for Strand to sidefoot beyond Reina, who subsequently made his ire clear.

Four minutes later it was 2-0 after Adam was adjudged to have taken Kone's ankle in the box. Ogude seized the ball and blasted beyond the diving palm of Reina.

Talk about a shift in momentum. Valerenga were now firmly on the front foot, Kone navigating Carragher before having his path to goal road-blocked by Reina. Adnan Haidar then sought to get in on the act with a smack from range which Agger deflected wide.

The Dane was soon in action at the other end as Liverpool regained a foothold, sending a fearsome strike narrowly over the crossbar.

Another Downing corner caused havoc midway through the half, with Johnson snatching possession inside the box before a late intervention from a defender. Such deliveries could prove invaluable over the next 10 months.

Agger again strode forward as half-time approached, this time finding the target with a long-range lash only to be thwarted by the 'keeper. But Liverpool would not be denied much longer.

On 43 minutes a Downing cross to the back post was controlled and finished clinically by Carroll, who barely celebrated his second strike of pre-season.

Dalglish did not make any changes in personnel during the break, though Liverpool's shape now appeared to be 4-2-3-1, with Downing, Kuyt and Henderson behind Carroll.

Adam issued a statement of intent immediately after the restart by thundering into the hoardings from range, but there was little to follow it up in the period thereafter.

The former Blackpool midfielder resorted to a 35-yard smack on 59 minutes but again it strayed wide.

The next serious chance fell to the hosts as substitute Sidoine Oussou found himself with only Reina to beat - but that is easier said than done.

Another Downing centre almost led to an equaliser but Carroll's attacking header was instinctively saved before Shelvey skewed the rebound.

Alberto Aquilani, Raheem Sterling and David Ngog were next to enter with just over 10 minutes to go, replacing Carroll, Downing and Henderson.

Of all the substitutes, it was Aquilani who would have the biggest impact. Within seconds of his introduction, a chest and volley forced a corner - and it was his delivery from the sideline that Agger powered home with his head on 83 minutes.

The next goal was remarkably similar - an Aquilani shot winning a corner which Agger would convert, this time with his foot.

But just as the Reds looked set for victory Fellah found the corner of the net with a long-range drive. 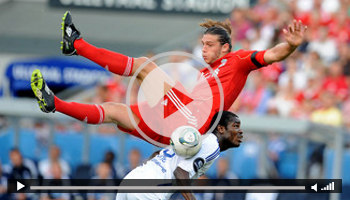