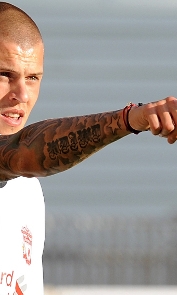 Jamie Carragher and Lucas Leiva have hailed Martin Skrtel after the Slovakian completed a remarkable 3591 minutes of Barclays Premier League football this term.

Skrtel and Everton's Leighton Baines were the only outfield players not to miss a minute of top-flight action in 2010-11 - and the Liverpool man's feat has not gone unnoticed in the dressing room.

"It's a fantastic achievement by Martin," Carragher said. "It's very difficult to play every match the way the modern game is with big squads and rotation.

"There's also the intensity of the games and how many knocks you can get.

"I was hoping that Leighton Baines would maybe get a slight knock on Sunday so he would have to come off and Martin could have the record to himself.

"But it's still great for him."

Lucas Leiva, who played in 33 of the Reds' 38 league games this season, added: "Martin has been really good ever since he came to the club and his form this season has been excellent.

"He is really strong and he gives the midfield confidence that we have a very good centre-back.

"For a defender it's tough to play every game as you can easily pick up yellow cards so his record is very impressive."