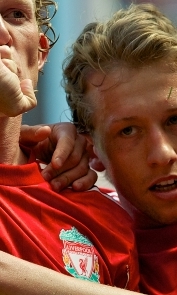 Lucas Leiva believes Liverpool still have a great chance of securing Europa League football when they travel to Villa Park on Sunday.

The Reds face Aston Villa knowing they have to better the result obtained by Tottenham Hotspur at home to Birmingham City.

However, Birmingham could need to win at White Hart Lane in order to avoid relegation to the Championship.

Meanwhile, Gerard Houllier's Villa side have nothing tangible to play for.

Lucas told Liverpoolfc.tv: "We have to go there and try to win. I think Birmingham will try to get points from Tottenham and that helps with the way they'll approach the game. They have to get points or they could be relegated.

"At the end of the day it's not in our hands so we just have to do our job. Hopefully then something good will happen for us.

"Villa just beat Arsenal away which shows they are really committed. They have had difficult times this season but they have a good team, a good squad. They showed against Arsenal they can beat any team.

"Getting fifth would be very important for Liverpool. But we still believe we can finish well. You never know. I always try to be positive and think the best thing will happen to Liverpool.

"We have to go into the last game with the commitment we've shown lately."

Regardless of whether Liverpool finish fifth, Lucas thinks supporters can take a lot of heart from our revival under Kenny Dalglish.

If the season had started when the Scot re-took the reins on January 8 Liverpool would be set for a comfortable top-four finish.

"At the beginning of the season we were around the relegation zone," Lucas added. "I don't think anyone was expecting us to finish fifth or sixth and that's a great comeback.

"It's an achievement but we are Liverpool and we want to finish higher than that. The Champions League is the biggest target for us but we just have to finish well and start next season with a really positive mentality and attitude and then we'll have a big chance of making our fans smile again."