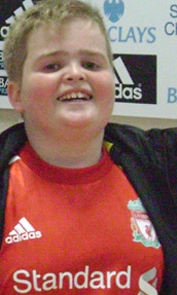 Charlie, who suffers from Cystic Fibrosis, got the chance to meet management and playing staff at the Club's training base before being given a tour of Anfield.

Such was Charlie's delight at the end of his special day, his Dad Carl felt moved to write a letter of thanks to everybody at Liverpool FC for helping make his son's dreams come true,

"Cath and I would like to thank everybody at Liverpool FC for a truly special day yesterday.

"Without going into too much detail we know what lies a head for Charlie is not what you would choose and there's every possibility that we won't see him reach him the age of his hero Stevie G, but the look on Charlie's face when he met his heroes is something that we will cling to, cherish, be able to look back on, recall and share for many years to come.

"I think that all three of us were overwhelmed at how welcome Charlie was made to feel, all the players and staff are a total credit to the football club.

"While talking last night we were all saying how nice it was to actually witness all of the different personalities and see the confidence of the senior players and staff but also witness the shyness of the younger members of the squad. They truly are normal people with an exceptional talent and Charlie has witnessed that first hand.

"As a fan I get an enormous amount of pleasure out of Liverpool winning, the Premier League title is something that everybody craves but yesterday LFC gave me something that they will never be able to surpass - they filled a young boy's heart with joy, made him forget about all his woes and truly gave him an experience that will make him the envy of everyone he meets in the future.

"I hope you are able to pass on our thanks to the staff and players and let Mr Dalglish know that we have seen first hand why he defends his players with such vigour. They truly are special people and I for one will forevermore forgive any mistakes made on the pitch because of their attitude and behaviour as people off it.

"As an aside my main memory will be the way that Sammy Lee greeted Charlie on the stairs. What a great reception - in fact what a great man. Also big, big thanks to Steve Clarke for giving Charlie his undivided attention and listening to his training ideas!"