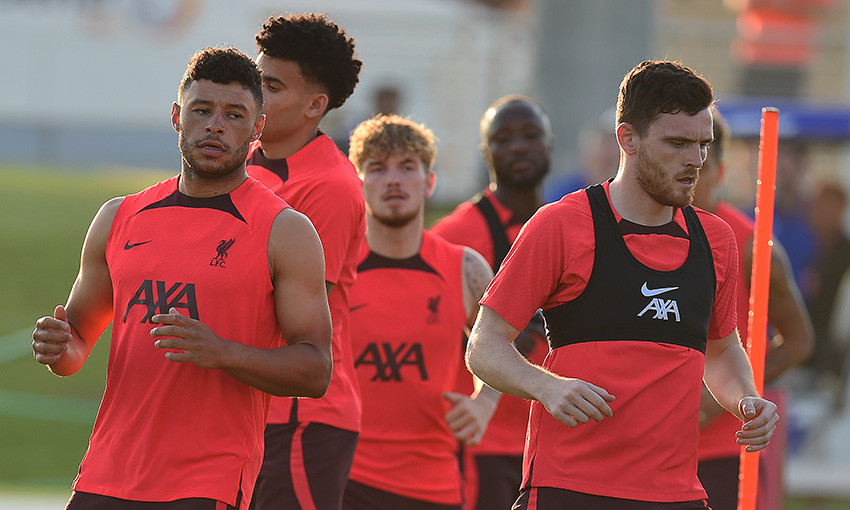 Andy Robertson believes Liverpool's Dubai training camp will play an important role in preparing the Reds for the season's restart later this month.

Jürgen Klopp’s charges completed their first session of the winter camp on Tuesday afternoon as they began their mid-season warm-weather programme ahead of the Dubai Super Cup.

Liverpool named a 33-man squad for the trip amid the current hiatus from domestic action due to the ongoing World Cup.

The Reds will return to competitive action on December 22 against Manchester City in the Carabao Cup, before the Premier League gets back under way at Aston Villa on Boxing Day.

Robertson spoke exclusively to Liverpoolfc.com to discuss the recent break from matches, the platform the camp can provide for the squad, and much more.

Read on for the full interview with the No.26 below…

Andy, you’re back out on the grass now, how much did you benefit from the recent break?

Yeah, a bit of downtime. We had a bit of a holiday – a bit of a break. I just tried to switch off and then tried to keep myself ticking over. It was great to spend time with the family, great to spend time with the kids. Family holidays are always rare, and I managed to get a good few days with them – they loved it. They loved having daddy there. Yeah, it was a good time. You start getting itchy feet and you want to get back on that grass and you want to start playing and you miss the boys and all the staff. I think we got to that point; we’re good to go again and excited to be back.

You’ve been in the game a while now. How strange has it been for you to stop mid-season?

It’s obviously been different. The last couple of years we’ve had a break in February but you’re coming back with maybe 10 or 12 Premier League games, but we’ve still got most of the Premier League ahead of us. It’s been difficult. Before the break I thought we were getting a bit of momentum, started putting in good performances and we started improving a lot, so it’s important we pick that up.

We’ve not got any time to waste, the start of the season hasn’t been what we wanted. It’s been nowhere near the standards that the fans have been used to for us, so it’s important when we come back we try to hit the ground running because that’s all we can do. It’s the only way we have to do it and these 12 or 13 days here will be so important for that just to try to get football back in the legs – get your touch back, get your fitness back and we’ll be good to go come the 22nd.

As an international captain, how have you found watching the World Cup?

Difficult, not really watched it, to be honest – [I] tried to switch off from football for a couple of weeks. Slowly but surely the last couple of days [I] started watching a couple more of the games and things like that. I was obviously in the other part of the world where time difference was a wee bit [different], and I didn’t want to stay up and watch the games.

I’ve watched all the games now – I want all the lads to do well. Darwin is already out, which is disappointing for him, but the other lads are going strong, and they look really good and their teams look really good. I want the boys here to go well. For Scotland it’s obviously difficult, we think we should’ve been there, but we didn’t perform the way we did in the play-off, which was disappointing from our point of view, and we have to deal with that.

There are not many things you’ve not done now in your career – but is playing at the World Cup one of the aims left?

When I went on holiday I actually bumped into David Alaba and he’s in a similar boat obviously playing with Austria. He said he’d been to a couple of Euros, but never been to a World Cup. We were both kind of talking that we were getting on a bit, so the chances are running out for us to qualify.

But yeah, look, the last couple of games I’ve watched you’ve seen the passion of the fans, passion of the players representing their country and the biggest tournament always is a massive, massive thing for you. I felt it representing my country at the Euros for the first time in a long, long time. The World Cup is the one that bites away at me. I’ll definitely have one more shot at it – maybe two, let’s see – but that’s in the future that’s for sure. It is something you want to achieve and something you want to be part of, and in the future that’s definitely a target of mine.