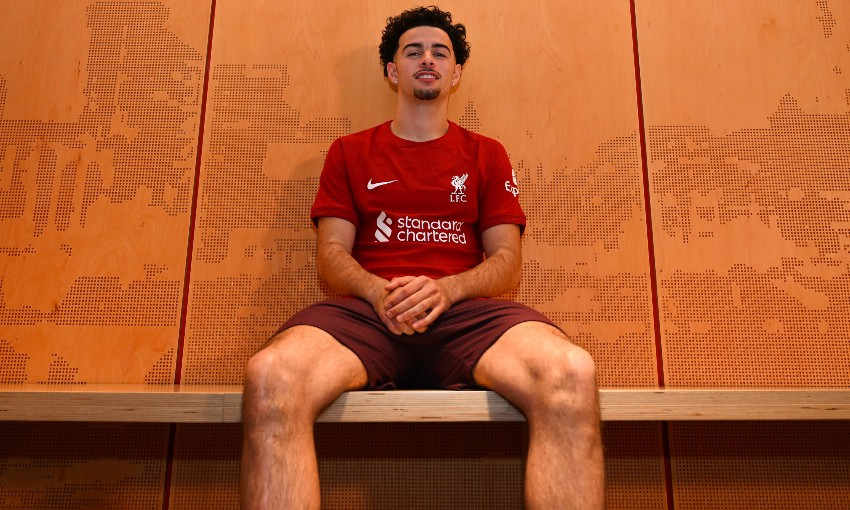 Curtis Jones outlined his determination to make his mark at Liverpool after signing a new long-term contract with the club he loves.

It was announced on Thursday that Academy graduate Jones has committed his future to the Reds and, soon after putting pen to paper at the AXA Training Centre, the Scouser sat down for an in-depth interview with Liverpoolfc.com.

Read a full transcript of our chat with Jones below.

Curtis, congratulations. How does it feel to have signed a new long-term contract with Liverpool?

First of all, I want to thank the coaching staff for having the belief in me as always, for giving me the chance. And of course for me, I’m over the moon, I’m buzzing, it was an easy thing [to decide to renew]. It’s my boyhood club, I’m a Scouser, I’ve supported the club for the whole of my life, so yeah, I’m buzzing and I can’t wait to see what the future holds.

How long did it take you to decide to sign when you knew it was a possibility?

In the blink of an eye, easy! When I was told I didn’t even have a second thought. There’s no other place that I’d rather be and that I see myself, so I’m happy to be here and I’m happy to give my all again.

You’re a local lad living the dream playing for the club he loves, but you’re also a professional who’s got ambitions and goals in the game – so why is Liverpool the perfect place for you to achieve those aims?

For everything, really. I think if I was at a different club as well, my goal and aim and dream would always be to come here and play. But I’m here now, I’ve been here since I was six, I’ve gone all the way through. I’ve supported the team for the whole of my life and especially now with how the team is and the coaching staff around me, I just feel that it’s the perfect place for me and again, as I said, I can’t wait to see what the future holds.

It was a decision made with your heart and your head, then?

All heart, all heart! I mean, the head of course is always a different place and especially now because I’d been out for a while so the head was at the place where I couldn’t wait to come back and play and to have the excitement again of being out there on the pitch. Then the heart, of course, is always here with the club, the fans, the stadium, the city and stuff. So yeah, it was easy.

You last signed a new contract back in July 2020, which feels like a very long time ago now. How have you developed as a player since then?

I’ve developed a lot but at the same time I’m learning still. 2020 was a difficult time, it was around the time of Covid and stuff, so it was a time when I was playing but the fans weren’t there. Now I’m at the point again where I’m playing again and the fans are around, so in my head I just have it there that I want to give as much for the fans of the club and the city, so yeah, it’s exciting times.

When you were in the Academy you were very much an attacking player but, in the first team, you have been moulded so you can also play further back in midfield. Do you feel that you are a much better all-round footballer with a better understanding of the game having experienced both roles?

Yeah, definitely. As you said, I was in the Academy and I was an attacking kid, the first thought was always to have the ball and just run and just try to score or assist or shoot. But the older you get and the more experience that you have around the team and in the Premier League and the Champions League and stuff, you start to learn that it’s not as simple as that so you kind of have to change your game. I’ve played in a deeper role, so it’s given me more of a disciplined side that I need to understand that defending and stuff is a big part of the game and at times it’s better to be simple on the ball, and then in the final third you can ‘do your bits’ as I say in terms of scoring your goals, you’re assisting, you’re crossing, you’re creating chances and stuff. So, I’m learning it all now and I’m still on the journey.

You’re still very young but do you feel like you’ve grown and matured a lot as a person too over the last few years?

Yeah, definitely – as a person, but more as a player I’d say. I’ve always been a young kid who’s played up in the age groups so I’ve always been a mature kid. But as I said then I’ve always stuck as one kind of player and it got to a certain point where I was getting found out a bit, I was taking too many touches and stuff on the ball and giving away the ball a bit. So no, I’ve changed my game and it is for the better.

You mentioned the manager and his coaching staff having confidence in you in your very first answer – can you tell us a bit more about how they have helped you develop as a player?

In every way. Everything that I’ve said here in terms of that I’ve changed as a lad, I’ve changed as a player, I’ve changed my game in certain parts, it’s all because of them. If I didn’t have their help, I’m not saying I don’t have a football brain where I can figure it out as well, but with them it was just quicker, it was easier. As I said, I’m grateful and I’m fortunate to have staff like them around me.

This squad is full of incredible role models too. What is it like to work in this environment and be part of that changing room? It must be great for a young player like yourself to have people like that to look up to and learn from...

Yeah, I’d describe it as ‘open arms’. I came in, I think I was 17, and you’re always a little bit nervous or you want to impress or you can kind of overdo it at times. But ever since I’d been there, the lads were all calm, they always said, ‘We know that you’re here because you’re good enough, so be you and just enjoy it’ and it’s the best advice I’ve had. So, I settled in well and each year I think I’ve got better, so I’d like to see how that carries on.

Is there anyone in particular who you feel you have learned a lot from and has given you a lot of advice or does everybody help?

Everybody helps but in different ways. But a main one is, of course, Henderson – well, who I call ‘Skip’, but you call him Hendo or Jordan or whatever. But I’d say him, 100 per cent, in terms of you’re coming into the team and since I’ve been around it’s been the likes of Mo, Firmino, Sadio at the time who were scoring all the goals and having the headlines you’d say. But I feel one who goes a little bit unnoticed, I wouldn’t say underappreciated but someone who is not seen as much is Hendo in terms of the work he does on the pitch but off the pitch as well. How he is around here with all the staff and the young players and stuff is amazing so I’ve learned off that. He has kept me humble and on both my feet and grounded and stuff, so I’d definitely say Henderson.

You’re closing in on 100 senior appearances now and hopefully you’ll get there this season. You’ve achieved a lot already but if you had to pick one moment or game as your favourite so far, what would that be?

As you said there, I’m closing in on 100 so there have been plenty in there. But one game that stands out a lot is the time when I captained the team. That was only an U21s team at the time, but I went down as the youngest captain. And favourite moment, I’d put that in as well I’d say because we won the game and went through as well.

What’s the next step for you then? What are your aims and what do you want to achieve over the course of this contract?

I would just say really putting a mark out there. Since I came around the team there has always been hype around me, I’ve always been the kid who’s coming in, I’m a Scouser who has scored important goals and stuff. But at the same time I don’t think that I’ve really showed the real me. I’ve spoken a lot about how I have changed my game, I’m adapting, I’m maturing and stuff so I feel that it’s coming together as one now. So, I just feel that now is the time to go out there and show the real me and start to score more goals, assist more goals and help the team even more.

Finally, what’s your message to the supporters watching or reading this interview?

I want to say a massive ‘thank you’ for all of the support as always, and myself and the rest of the team and the staff will continue to give everything to put a smile on all of your faces. So again, thank you very much.