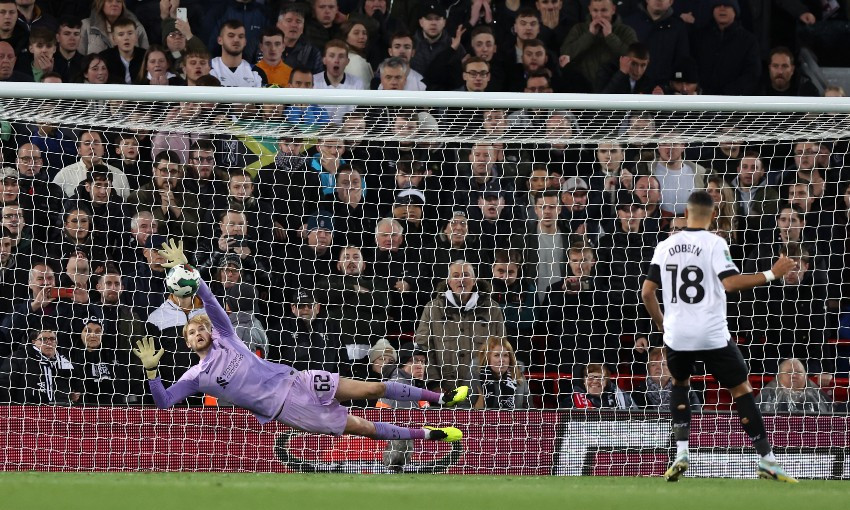 Caoimhin Kelleher saved three penalties as Liverpool moved into round four of the Carabao Cup with a shootout win over Derby County following a 0-0 draw at Anfield.

The goalkeeper, so pivotal in last season’s trophy win, further enhanced his reputation as a shootout specialist by stopping spot-kicks from Conor Hourihane, Craig Forsyth and Lewis Dobbin, before Harvey Elliott stepped up to secure a 3-2 victory for the holders.

Alex Oxlade-Chamberlain and Darwin Nunez also converted to ensure the Reds will be involved in Thursday evening’s fourth-round draw.

Layton Stewart came in for his senior debut as one of 11 changes made by Jürgen Klopp following Sunday’s win at Tottenham Hotspur.

There was also a first start for summer signing Calvin Ramsay, while Joe Gomez was named captain.

An understandable lack of cohesion undermined Liverpool’s efforts to convert their dominance of possession into goals, with their only attempt in the early stages a well-struck Oxlade-Chamberlain half-volley from the edge of the area following Kostas Tsimikas’ corner.

On the half-hour mark, Bobby Clark seized a loose touch from Eirin Cashin and fed Fabio Carvalho, whose cross located Stewart. The Academy striker was leaning back, though, and skied his shot.

The Reds had upped the tempo momentarily and, a minute later, Tsimikas skewed a volley wide after Derby goalkeeper Joe Wildsmith had palmed away Oxlade-Chamberlain’s delivery.

That was to be the final meaningful goalmouth action of a low-key first 45 minutes.

The first opportunity of the second period was Derby’s, Max Bird pulling an effort wide from close range, but Liverpool then enjoyed their first spell of sustained pressure on the visitors’ goal.

Wildsmith readjusted well to save Oxlade-Chamberlain’s deflected shot and he then palmed away after Carvalho had dug out an attempt.

Carvalho was a fraction away from connecting with a diving header from Melkamu Frauendorf’s cross and, midway through the half, Klopp turned to his bench and introduced three senior stars.

Predictably, Elliott, Nunez and Roberto Firmino provided an immediate injection of quality and Elliott played a deft one-two with Oxlade-Chamberlain, who was denied while trying to poke a finish past Wildsmith.

With quarter of an hour remaining, Ben Doak – 48 hours shy of his 17th birthday – came on and played with the same fearless intent as he has so impressively for Liverpool’s youth teams this season.

The Kop appreciated Doak’s direct, pacy running down the right flank, which had become the Reds’ clearly preferred avenue of attack.

A clever Oxlade-Chamberlain pass found Elliott, who saw his volley saved, before Firmino darted to the near post to meet Ramsay’s delivery and forced Wildsmith into a fine stop.

Nunez hooked an effort over the crossbar after more positive work from Doak as Liverpool looked to force a late Kop-end winner, but they would require another Carabao Cup shootout success to seal their place in the next stage.