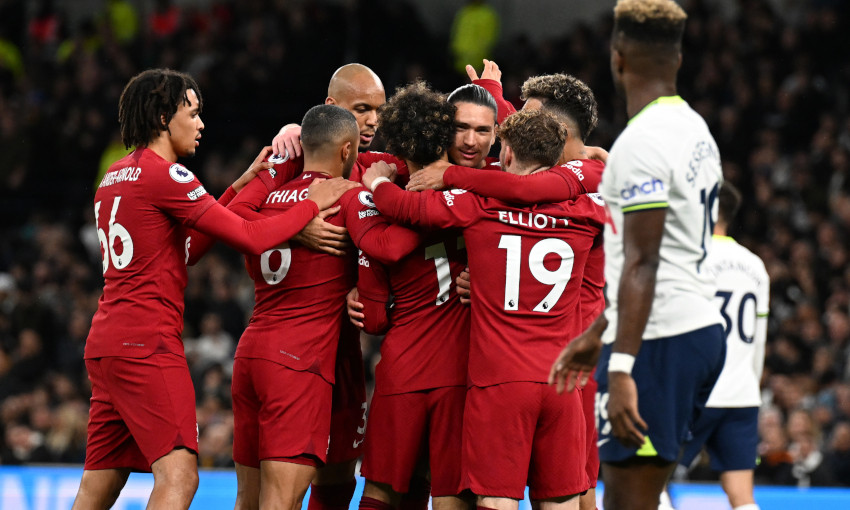 The Egyptian produced a couple of clinical finishes to cap a dominant opening 45 minutes from the visitors in north London, before Spurs responded with an improved display after the break and pulled a goal back in the 70th minute through Harry Kane.

Tottenham then enjoyed a late spell of pressure, with Clement Lenglet and Rodrigo Bentancur missing presentable chances, but the Reds stood firm to record an impressive win.

Darwin Nuunez, Andy Robertson and Harvey Elliott returned to the XI as Jürgen Klopp made three changes to his starting line-up.

Nunez, stationed on the left of the front three with Klopp sticking with a 4-3-3 formation, was a prominent figure in what was a positive start to the game from Liverpool.

The Uruguayan had two attempts on goal inside the first seven minutes, first seeing a half-volleyed snap-shot palmed away by Hugo Lloris and then curling a low shot narrowly wide.

Eleven minutes in, Nunez crowned his heavy early involvement with an assist for Salah. Robertson served the No.27 with a pass into the area and he unselfishly teed up Salah, who found the bottom corner with the minimum of fuss.

Attacks from Tottenham were few and far between but the hosts nearly levelled when Ivan Perisic saw a header hit the post via a touch off Alisson Becker’s shoulder, with the goalkeeper then quickly getting to his feet and saving Pierre-Emile Hojbjerg’s hit.

The Reds were dominating possession but their second goal was thanks in no small part to a Spurs error.

Salah gambled and gratefully latched onto Eric Dier’s weak header back to Lloris before coolly lifting his 10th goal in his last 10 appearances over the ‘keeper to ensure the half-time score accurately reflected the pattern of the match.

Tottenham emerged from the break with far greater enterprise and Alisson made a smart save to hold on to Dier’s header from a Perisic corner.

Perisic rattled the crossbar after being found by Ryan Sessegnon’s cutback during the hosts’ best spell of the contest, but Liverpool looked dangerous on the counter and Salah could have had his hat-trick when he was again found by Nunez only for Lloris to stop his attempt this time.

The wave of Tottenham pressure had dissipated but Kane got them back in the game with 20 minutes left. Dejan Kulusevski, just on as a substitute, slipped a throughball into the striker’s path and he fired home low across Alisson.

Spurs were buoyed and Lenglet nodded a corner over the bar prior to Alisson saving a Bentancur header, but Liverpool resisted and claimed a significant win.