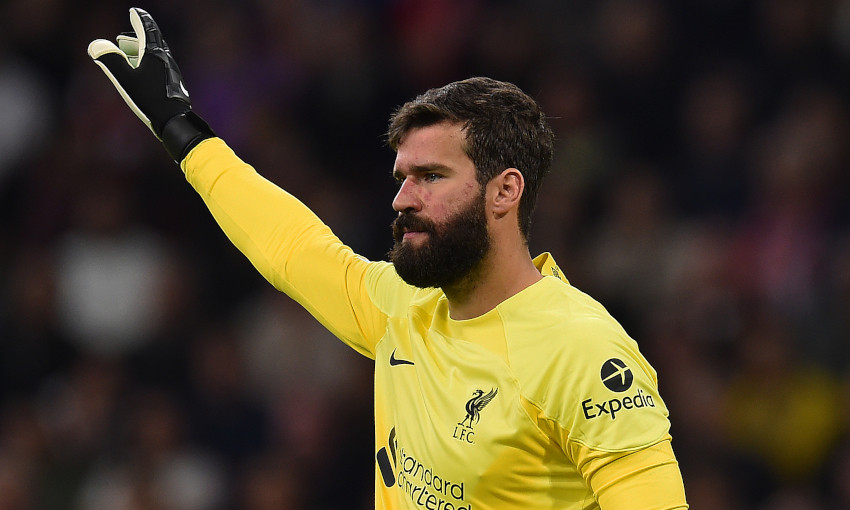 'We keep believing and keep fighting,' was the emphatic message from Alisson Becker as he detailed how he feels Liverpool can regain consistency.

The Reds journey to Tottenham Hotspur on Sunday aiming to return to winning ways in the Premier League following successive defeats by Nottingham Forest and Leeds United.

Jürgen Klopp's side were buoyed, however, by a 2-0 win over Napoli at Anfield on Tuesday in the Champions League, which inflicted the Italian outfit's first loss of the 2022-23 season.

Sitting down with Liverpoolfc.com at the AXA Training Centre shortly after being named the Standard Chartered Men's Player of the Month for October, Alisson offered an insight into the mindset of the squad following a mixed opening to the campaign.

The Brazil goalkeeper also reflected on hitting the milestone of 200 games for the club and his reaction to the sound of his name being sung by supporters.

Read on for our chat with Alisson…

Alisson, the games keep coming and it's a tough trip to Spurs this weekend. How important is it to go there on the back of a good win against Napoli?

It was really, really good for us. We are going with highs and lows during this season, but we are fighting and trying to get consistency back and [back to] winning games, one after another. It has not been easy for us fighting against so many things, so many difficult circumstances, injuries, not too much time to rest, but I think all the teams are fighting against those kind of things at this moment. Winning the game against Napoli was really good for us to set a basis for what we have to do on the pitch in terms of attitude, in terms of performance, in terms of what we are going to deliver on the pitch defensively and attacking. We did that against Napoli and we have to do the same against Tottenham, who are a really good side that fight a lot and have amazing players with a lot of quality.

The manager said in his pre-match press conference that we had to 'fight through this' - is that the way we are going to find that level of consistency again?

Yeah, it is what we are trying to do. We never give up, no matter how long it takes to get back to the consistency and winning ways. We will keep fighting. It's what we are here for, it's what we do - we are fighters.

How important is a positive mindset in this process?

It's really important. We never stop believing - we believe in each other, we believe in ourselves, we believe in the manager, the staff, in everybody who is fighting together with us. We have to just keep believing that we can turn it around, get back on the winning track and really give a proper fight, a proper try, to winning trophies this season.

You mention about believing in each other, when you look around the dressing room, when you see the characters and players in there alongside you, does that give you confidence we will see the 'real' Liverpool consistently again soon?

Yes. Every day. When we look to each other we see the quality we have in our hands. Sometimes you don't quite understand how things are not working out at the moment, but we understand as well this is football. We have been doing this for a while, so we know how things work in football and it is not like just clicking your fingers and magic. Things need a process, need time to happen, and we are trying to build up confidence, things from a basis, and that's what we are going to keep doing.

On a personal note, you reached the landmark of 200 games for Liverpool against Ajax last week. How proud are you to have achieved that number for this club?

Wow. It's massive. Two-hundred games I think is the most for one club and I am really attached to the clubs I've played for. My former team, my first team, Internacional back in Brazil, for Roma as well and now here. I am really happy and I am looking forward to the next 200.

We're hearing more and more the fans singing your name at the stadiums, how does that make you feel?