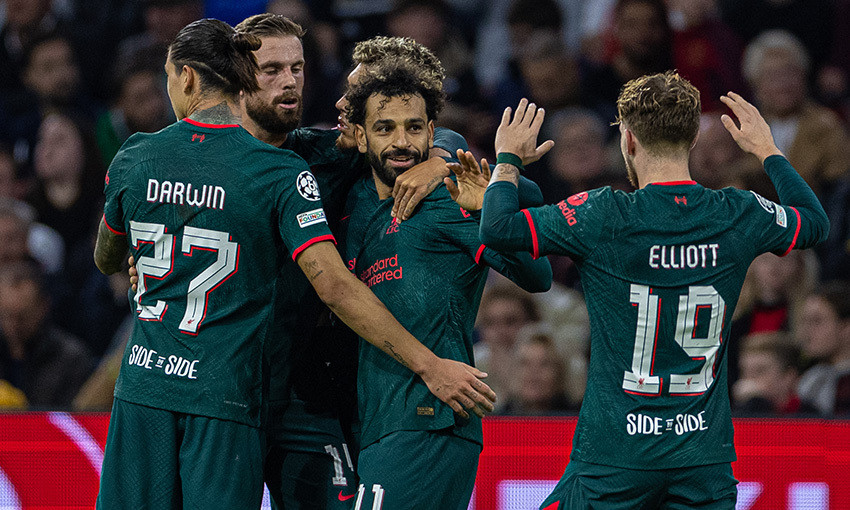 Liverpool qualified for the knockout stages of the Champions League with a 3-0 win away at AFC Ajax on Wednesday night.

Well-taken goals from Mohamed Salah, Darwin Nunez and Harvey Elliott guaranteed the Reds at least second place in Group A and, therefore, a spot in the last 16 of Europe's premier club competition.

Salah opened the scoring at Johan Cruijff Arena in the 42nd minute, before Nunez and Elliott increased the visitors' lead early in the second half.

There were three changes to Jürgen Klopp's XI, with Nunez, Jordan Henderson and Trent Alexander-Arnold all returning to the line-up.

A starting berth for Alisson Becker saw him produce a personal milestone, as he made his 200th appearance for the club.

Backed by a sold-out crowd in what was a must-win game, the hosts could have gone ahead inside three minutes.

Liverpool, though, had the post to thank after a one-two between Brian Brobbey and Steven Berghuis inside the box saw the latter crash an effort against the woodwork and bounce clear.

Ajax proceeded to create a number of other openings during the rest of the first half.

Berghuis curled a shot just wide from around 25 yards out, before Jorge Sanchez's curler forced Alisson into a comfortable save.

The Reds' first opportunity came down the left flank, with an incredibly lengthy spell in possession ending with Andy Robertson hitting the side-netting from a tight angle.

At the other end, another big chance fell to the Eredivisie champions but Alexander-Arnold was in position to put in a vital block, stopping Dusan Tadic's hit following a counter-attack from finding the back of the net.

Klopp's men finished the half off strongly, however, and crafted the breakthrough a few minutes prior to the interval.

An outside-of-the-boot pass from Henderson was clipped brilliantly over the onrushing Remko Pasveer by the left boot of Salah, who watched the ball enter the unguarded net.

A second could have immediately followed but Nunez hit the post from close range after Roberto Firmino teed him up with a typically unselfish pass across the face of goal.

But Nunez would not have to wait long after half-time to get on the scoresheet.

The No.27 added his side's second four minutes following the restart, glancing a header into the far side of the net off Robertson's out-swinging corner.

It was 3-0 three minutes later, too, when Salah played an inch-perfect pass that was fired into the roof of the net by Elliott from an unfavourable angle.

Ajax came closest to pulling one back through substitute Kenneth Taylor and Jurrien Timber, who were both off target with shots from inside the penalty area.

But Liverpool successfully saw the game out to secure qualification with a game to spare.