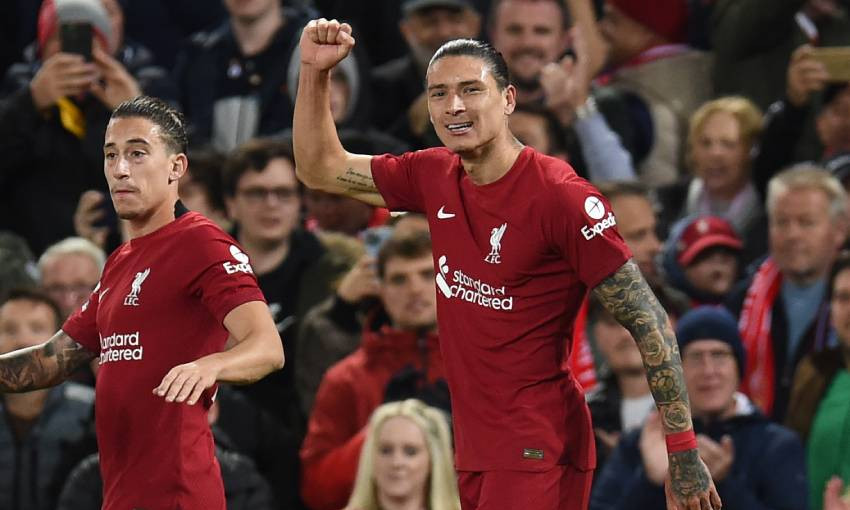 Liverpool edged out West Ham United on Wednesday night to record back-to-back 1-0 wins at Anfield in the Premier League.

Darwin Nunez grabbed the game’s only goal on 22 minutes, converting a Kostas Tsimikas cross with a fine header and he later struck the post with a volley in the first half.

The Hammers were awarded a penalty before the break, but Jarrod Bowen’s attempt was thwarted by a flying stop from Alisson Becker.

The Reds created further opportunities in the second period; however, West Ham threatened an equaliser in the closing stages – most notably when substitute James Milner produced a crucial challenge to deny Tomas Soucek in front of goal.

Liverpool made five changes from the team that begun the victory over Manchester City at the weekend. Trent Alexander-Arnold and Tsimikas came into defence, Fabio Carvalho and Jordan Henderson joined the midfield and Nunez started in attack.

Alex Oxlade-Chamberlain was named on the bench for the first time this season following injury.

A little over 72 hours on from Sunday’s thrilling encounter with City, the Reds were back on the Anfield turf aiming to build on back-to-back wins earned in the last seven days.

The hosts made all the early running in blustery conditions, with Roberto Firmino shooting well wide from the edge of the area and Alexander-Arnold having a dangerous ball into the six-yard box cut out by Lukasz Fabianski in the opening 10 minutes.

The West Ham goalkeeper was forced to swipe a dipping first-time Nunez strike over the bar soon after following a ball over the top from Thiago Alcantara.

However, there was nothing Fabianski could do as Liverpool took the lead with 22 minutes played.

Thiago and Tsimikas exchanged passes on the left, with the former sweeping a reverse pass back into the direction of the latter, who lofted a ball into the box.

The delivery was met by Nunez, who planted a downward header into the ground and into the net.

The Uruguayan could have had a second immediately when he pounced on a slip by Ben Johnson, but this time his near-post drive was beaten away by the Hammers’ ‘keeper.

Mohamed Salah was next to threaten for the home team, hooking wide of the post when teed up by Alexander-Arnold just inside the box. He tried his luck again moments later after a one-two with Firmino, but struck straight into the gloves of Fabianski.

On 39 minutes, Nunez rattled the post with a chest-and-volley from the edge of the area which had the opposing stopper beaten.

However, West Ham were awarded a penalty following a VAR check after a Joe Gomez challenge on Bowen inside the box shortly before the break.

It was the visiting forward who assumed responsibility for the spot-kick, but saw his effort repelled by a fine save by Alisson to ensure Liverpool’s lead remained intact as the teams returned to the dressing rooms.

Seconds after the restart, Henderson lofted a shot narrowly over after exchanging passes with Salah as Jürgen Klopp’s side looked to instantly reapply their dominance.

Nunez then blasted off target from a tight angle before making way as part of a trio of substitutions, which also saw Carvalho and Thiago removed and Harvey Elliott, Fabinho and Curtis Jones enter the action.

On 63 minutes, Firmino went agonisingly close to furthering the Reds’ lead; however, Aaron Cresswell got a vital touch to block his snap-shot from Henderson’s cut-back. The Brazilian headed into the grasp of Fabianski from the resulting corner.

As the game entered its final quarter, West Ham demonstrated the outcome was far from decided when Declan Rice’s hanging cross towards the back post found Said Benrahma in space, but he prodded straight at Alisson.

At the other end, a ricochet in the box at a corner saw the ball break for Jones, who had a swipe goalwards deflected narrowly over the bar.

The hosts went close again with 12 minutes remaining – this time Kurt Zouma’s attempts to cut out a Henderson cross saw the ball inadvertently loop over Fabianski and onto the frame of the goal.

David Moyes’ team next spurned an opportunity on the counter following a Reds set-piece when Gianluca Scamacca blazed wide after being slid in by Michail Antonio.

Fabianski saved from Salah before Liverpool survived a significant let-off when Soucek was prevented a near-certain goal by Milner’s last-gasp challenge from Bowen’s pass in a nervy finale that the hosts were able to successfully navigate.