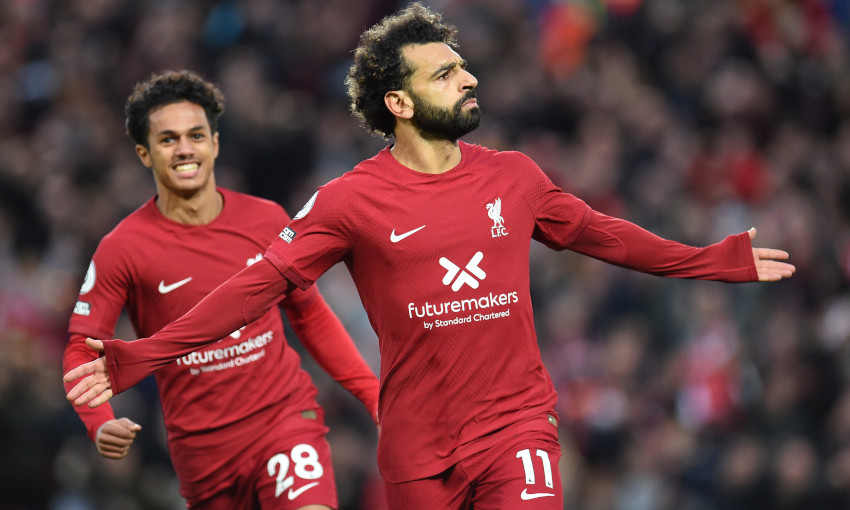 A 76th-minute winner that echoed Salah’s famous strike against Manchester United in January 2020, with Alisson Becker’s pinpoint pass being finished beautifully, settled a dramatic and eventful contest between the division’s pre-eminent forces over recent seasons.

It came after Phil Foden had seen a goal disallowed following a VAR review and before Jürgen Klopp was sent off as the atmosphere reached boiling point.

A tense final 15 minutes followed Salah’s moment of brilliance, but the Reds held firm to record an excellent, and much-needed, win.

In the absence of Ibrahima Konate and Joel Matip, Joe Gomez partnered Virgil van Dijk at centre-back, with James Milner filling in at right-back.

Andy Robertson returned to the starting XI along with Salah, while Trent Alexander-Arnold was fit enough to be named on the bench.

Salah - stationed centrally alongside Firmino as Klopp stuck with a 4-4-2 formation - was dangerous from the off and won an early corner at the conclusion of a lovely Liverpool move.

The game duly settled onto a rhythm of City enjoying most of the ball while the Reds waited for moments to pounce and break with speed and intent.

Alert defensive work by Gomez thwarted Erling Haaland before the home crowd roared their approval when Salah shrugged off Nathan Ake and surged goalwards, only for Ruben Dias to intervene and clear behind.

That precipitated Liverpool’s most productive spell of the half, as Diogo Jota saw a header saved prior to a sweeping sequence of passing from back to front that ended with Robertson fizzing the loose ball narrowly over the crossbar once Ederson had punched Milner’s cross away.

City served warning of their enduring threat by creating the final opportunity of a half high in tempo and quality, with Kevin De Bruyne picking out Haaland at the back post. The Norwegian could only head straight at Alisson, however.

Having been bubbling under for the first 45, the contest ignited in the minutes immediately after the interval.

First, a Liverpool counter resulted in Firmino springing Salah behind City’s high line and the Egyptian placed a low finish that was bound for the bottom corner before Ederson made a superb save to tip wide.

No corner was given, though, and City soon thought they had taken the lead through Foden, only for referee Anthony Taylor to disallow the goal following a VAR review due to Haaland fouling Fabinho in the build-up.

In the wake of that reprieve, Jota nodded Salah’s cross into the side-netting and the noise inside Anfield was cranked up to thunderous levels despite the Portugal forward being flagged offside.

Salah then marginally overcooked a delivery for Firmino, prior to Alisson pawing away a low Haaland effort at full stretch.

Klopp sought to freshen up his team by making a triple substitution, Darwin Nunez, Jordan Henderson and Fabio Carvalho entering the action in place of Firmino, Fabinho and Harvey Elliott.

It felt inevitable that it would be Salah who provided the cutting edge for the Reds, though – and so it proved with 15 minutes to play when he and Alisson reprised that goal against United.

Salah produced a wondrous first touch to kill Alisson’s fabulous volleyed pass and spin away from Joao Cancelo all in one fluid movement, and then sprinted away towards the Kop before lifting an ice-cool finish over Ederson. Cue bedlam.

City responded and the outstanding Van Dijk read Cancelo’s intention to find Haaland with a cross and cleared ahead of the striker, before Klopp was dismissed for his protests after a clear foul by Bernardo Silva on Salah was not given.

A three-on-one break could have led to Liverpool sealing all three points but Nunez failed to see a free Salah, but that had no bearing on the outcome as the Reds resisted a late spell of pressure to secure a memorable victory.