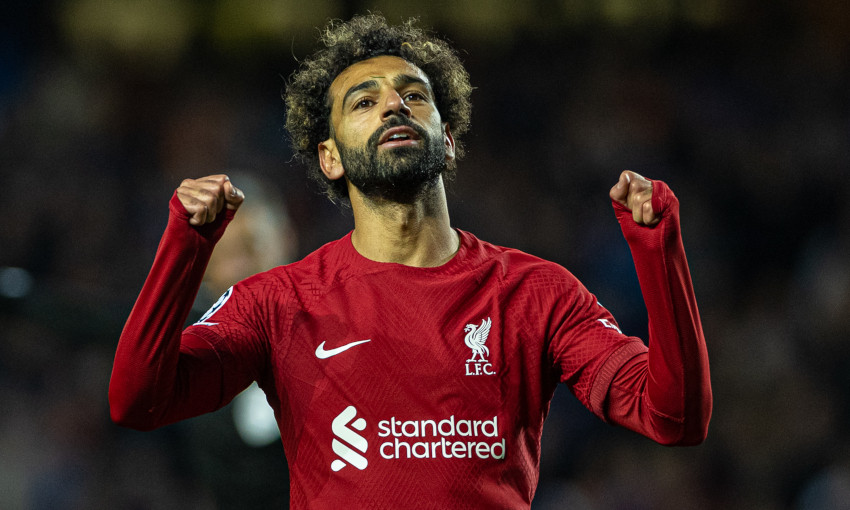 Jordan Henderson: Rangers win is a step in the right direction

Jürgen Klopp hailed the flexibility Mohamed Salah provides to the Liverpool attack after his record-breaking hat-trick against Rangers.

The No.11 came off the bench at Ibrox on Wednesday night to score the quickest treble in Champions League history, with his goals coming in a period of six minutes and 12 seconds.

Salah also played a key role in Harvey Elliott’s strike – the Reds’ last of a scintillating 7-1 victory over the Scottish side – as Klopp’s team moved closer to reaching the knockout stages.

At his press conference to preview Sunday’s Premier League clash with Manchester City, the manager was asked how much confidence the Egyptian will carry from that showing.

“It helps, for sure, definitely,” said Klopp. “You could see the goals were all different. The first one, I think it was a blocked ball from Diogo [Jota] and then Mo picks it up, brings it down and then the reaction there, brilliant.

“I think I’m pretty sure he learned from the first game against Rangers when the goalie reacted a lot of times really well because he knew when we will finish and Mo was a surprising finish with the front of his foot. A really good goal.

“And then the other two, typical Mo if you want, when he’s in a cheeky mood, in a confident mood. The second one was very special because I think the only one who saw that gap there in the short corner was him. And the third one was a brilliant goal as well, bringing it into the far corner.

“So all these things, we know they help. But what can I say? The best thing you want for your strikers is that they score, and they all scored or were involved in goals. That’s good. And now we have to make a line-up for this game.”

Discussing Salah’s deployment in a more central role upon his second-half introduction at Rangers, Klopp added: “In this game it was the change we made because Mo came on and Harvey stayed on the pitch and we didn’t change system.

“He can play the position, no doubt about that, but he can play a wider position as well. In the moments when he finished the situations off he was more central, that makes sense, but it was still his space, especially for two goals.

“When he set up the goal for Harvey, which Diogo might have finished off already, then he was more flexible and that’s the flexibility we need in our offensive moments. But it’s not so different. Whichever system we play, for finishing you need to be in and around the box, that’s how it is. And he was there, definitely.

“I don’t think it had too much to do with the position, there were situations when we were in possession where Mo moved to the right side, to his right wing, and that’s completely normal.

“You need to be flexible, you need to fill up the spaces, you need to force the defensive players to react on different scenarios. It’s quite comfortable when you’re always in the same space as an attacker, the defender knows, ‘OK, when the ball is coming, I’ll be there’ and stuff like this.

“But if we are more flexible that makes it immediately much more difficult, and that was really good in these moments. But I think two of the goals he scored from his usual position, so nothing special [about being central].”