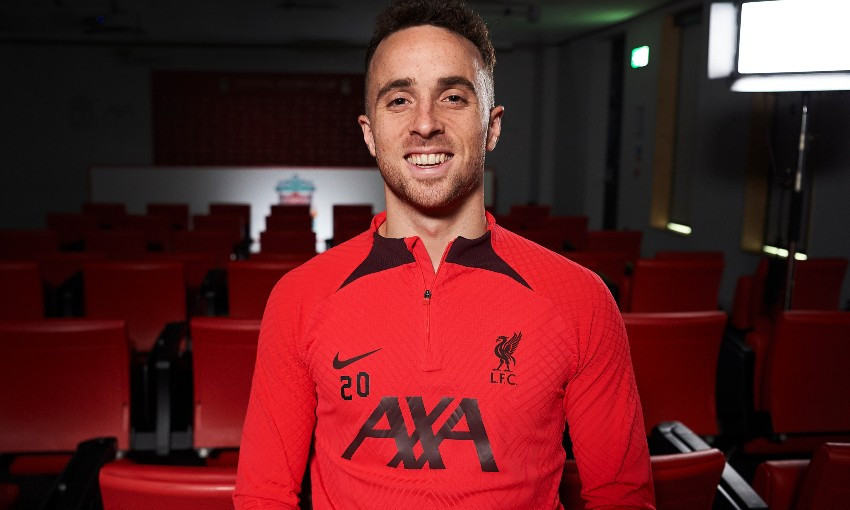 Diogo Jota is looking forward to a bright future with Liverpool on a personal and collective level after signing his new long-term contract on Tuesday.

The No.20 put pen to paper on the deal at the AXA Training Centre to extend his stay at the club, which began in September 2020 following a transfer from Wolverhampton Wanderers.

Jota, who scored 34 times in his opening two seasons at Anfield, lifted his first pieces of silverware as a Red in 2021-22, having helped Jürgen Klopp’s side win both the Carabao Cup and Emirates FA Cup during the campaign.

The forward is now hoping to force further changes to the Champions Wall in the coming years, as he explained to Liverpoolfc.com in an exclusive interview not long after inking fresh terms.

Watch our chat with the Portugal international here, or read on for the full transcript…

Diogo, congratulations on signing a new deal with Liverpool FC. How does it feel in this moment?

Well, really proud, I have to say. Obviously since I arrived two years ago I established myself as an important player in this team – that’s what I wanted from the beginning. Now, signing a new long-term deal, it’s obviously from the club’s perspective proof of the belief in myself as a player. For me, obviously it’s really good to establish I’ll be here for a while. So, the beginning of a new season, let’s do it.

How easy a decision was it to make, to sign this new contract?

A no-brainer, I have to say. Obviously one of the best clubs in the world. Last year was good for me and for the team. Like I said, [it’s] a proof we are doing things right and hopefully we can keep doing that.

As a player who has got drive and determination to win things and improve, is Liverpool the perfect place to be at the moment for that?

Yes, I think Liverpool at the moment is one of the best if not the best. We were close last year to winning the Champions League. That’s [something] all the players want. Hopefully we can give it a good go this year again. When you fight for everything, like we did last year, you just want to do it again and to do it better, because it’s possible. That drive is in me and I know it’s in my teammates and all the staff. We have everything to fight for those titles out there.

Everything seems to be in place at the moment; the manager and squad, most of them are tied down for the long-term future. How bright does the future look at this club?

I think it’s impressive, I think Liverpool is working really well on and off the pitch. Like you said, the squad is here for a while, you have those contracts going on, you have the new signings, we have everything in place, we have the manager obviously. I think they are working really well. We had some trophies, like the fans always want to see. Hopefully this season – we started already with one – we can add some more because that’s what makes football worth it. But, like you said, everything is in place so it’s up to us now on the pitch. 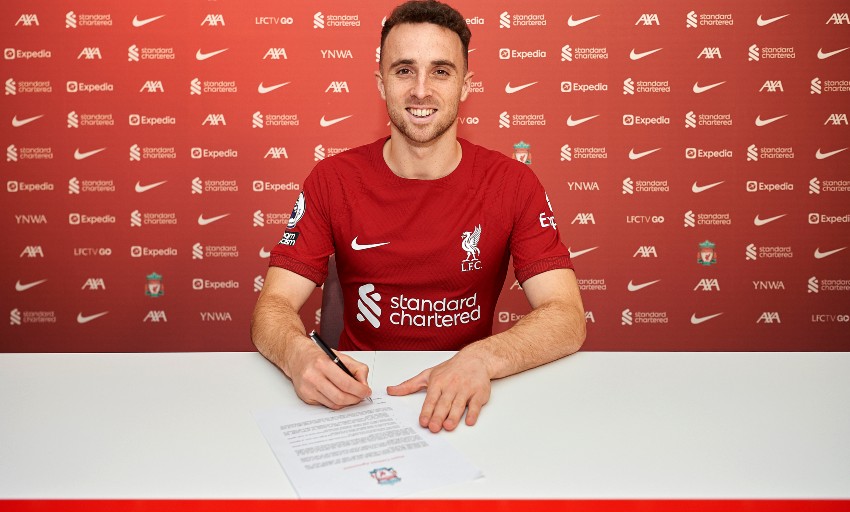 You’re now heading into your third season as a Liverpool player. How would you reflect on your first two years you’ve been here? It’s been eventful on and off the pitch for you…

Yeah, the first one was a bit different because of COVID. Anfield without people is not quite the same thing. They played an important role – massive – last season when we haven’t lost a game [at home] in the Premier League. They know how important that factor is. I would say it was two very different seasons in that perspective. This year we have everything to go again and do similar like the last one. With them by our side it’s always easy.

You finally got your hands on some silverware as a Liverpool player last season. How special was it to force a change to the Champions Wall around the training ground and at Anfield? And you must have the taste for it now?

Yeah, it’s really important for us obviously, winning silverware. It shows you [that] you are doing things right; it’s hard when you think you’re doing it right but you’re not quite winning. That doesn’t feel nice, I know that as well. We did that, we can do it again. Everyone together, I think we are able to do it.

How much have you developed as a player from the one that joined from Wolves in 2020?

Well, quite different, I have to say. I obviously played kind of a different role as well most of the time. It helped me grow as a player, obviously more mature now, more knowledge of the game. Everything is better, I have to say. We need to obviously keep improving because I think I didn’t reach my prime yet. Hopefully during the duration of my stay here I’ll do that.

You found your feet pretty much straight away in the forward line, came in and had an impact. How at home do you feel in this style of play and surrounded by the types of players we’ve got here?

Yeah, I said that in my very first interview – I thought I suited the style of Jürgen and the team. I think I proved that instantly, like you said. Now it’s a question of developing our game, developing the intensity we play [with] because although we are doing brilliantly, there’s always one more step and that’s the step we are trying to make every time.

There’s plenty of competition for you in the forward line, given the world-class options we’ve got here, but you already knew that when you joined Liverpool and seem to enjoy that challenge. How much has that helped you improve as a player?

I think it makes everyone better each day when you go out there [on the] training pitch and you have quality, world-class quality all over the place. It helps you [in] getting better and that’s the plan because we all get better each day. That will be more difficult for the opponents to beat us every weekend. So it’s always useful when you have such quality because you also know the amount of games we play, we need everyone and everybody counts.

Yeah, I believe strongly in that. The better you are, it’s harder to improve – but only if you have the best by your side and the best competing against you, that’s possible. I believe that’s possible and that’s what I want to do.

He's a lad from Portugal…🎶 https://t.co/Z8o3AQvhEi

You mentioned it before but nearly all of your first season was played without fans. It must be absolutely night and day now that they’re back in the ground...

[The] first season was hard in that perspective. [The] second season was obviously completely different and the effect you can see in the results. This season, hopefully if everything goes like it is at the moment, we will have them by our side and everything is easier.

And they’ve given you a really, really catchy song as well, which must be quite an honour...

Obviously when they started singing it, it’s a moment where you need to stop and say, ‘Wow, this is happening.’ Because one thing is to arrive here, people are just, like, waiting to see what I can do. But that moment they showed appreciation as well to me. It’s really important and a moment to be proud of.

Do you find yourself singing it, or any of your family members?

Well, I don’t like to sing, I’m not too good a singer. But obviously you come across some videos, some stuff that makes you proud. I have some family and friends, they sing it sometimes. It’s always nice.

Just switching to the present, how’s the injury and what’s the timeframe looking like?

Unfortunately for me I had an upset in this pre-season because I got injured [in the] last game of the season playing with Portugal. So I was coming back in this pre-season, I felt it a little bit again. So it will be a few more weeks, I would say.

Now you’ve signed this contract, what are your hopes for the short- and long-term future?

Like I said, for me it’s great, obviously an acknowledgement of the club to give me a contract and believe in me in what I’m doing. It’s massive for me. It’s like a fresh start. We have a long-term contract to fulfil all the obligations and hopefully with trophies to add.