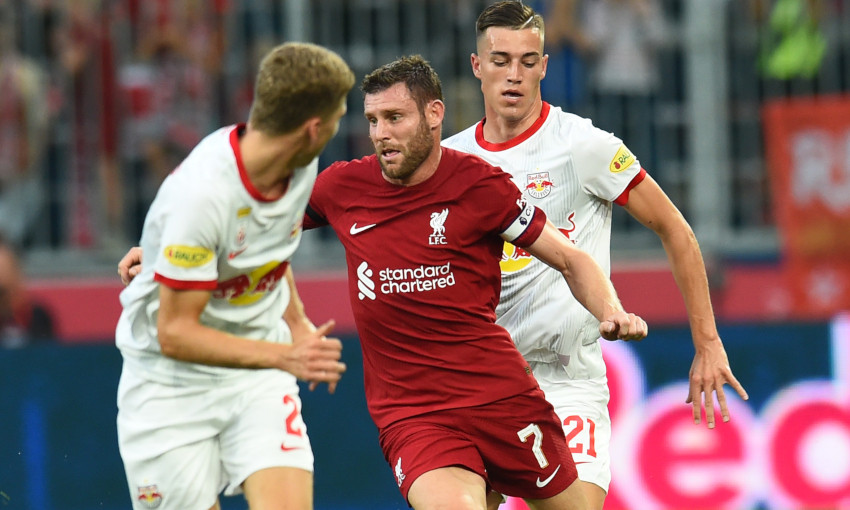 Benjamin Sesko’s assured first-half finish put the Austrian champions ahead and the visitors were unable to find a way through to equalise.

Jürgen Klopp did, however, give more important minutes to 22 players over the course of the game as the Reds prepare to kick off competitive action for 2022-23 in this weekend’s FA Community Shield.

The manager shuffled his starting XI again for the fourth outing of pre-season, with summer signings Fabio Carvalho and Darwin Nunez deployed in attack and James Milner the captain.

Liverpool settled into an ascendancy at Red Bull Arena as the hosts opted to wait for opportunities to spring counter-attacks with quick passes in behind.

With 10 on the clock Milner spotted the space Nunez had found between Salzburg’s two centre-backs and lofted the ball from deep on the left. The Uruguay international went for a first-time header that was caught with a dive by Nico Mantl.

Salzburg responded moments later as Joe Gomez’s pass was cut out at the edge of the box. He made amends by blocking Fernando’s thump towards goal, and Sesko whacked a shot too high on the follow-up. 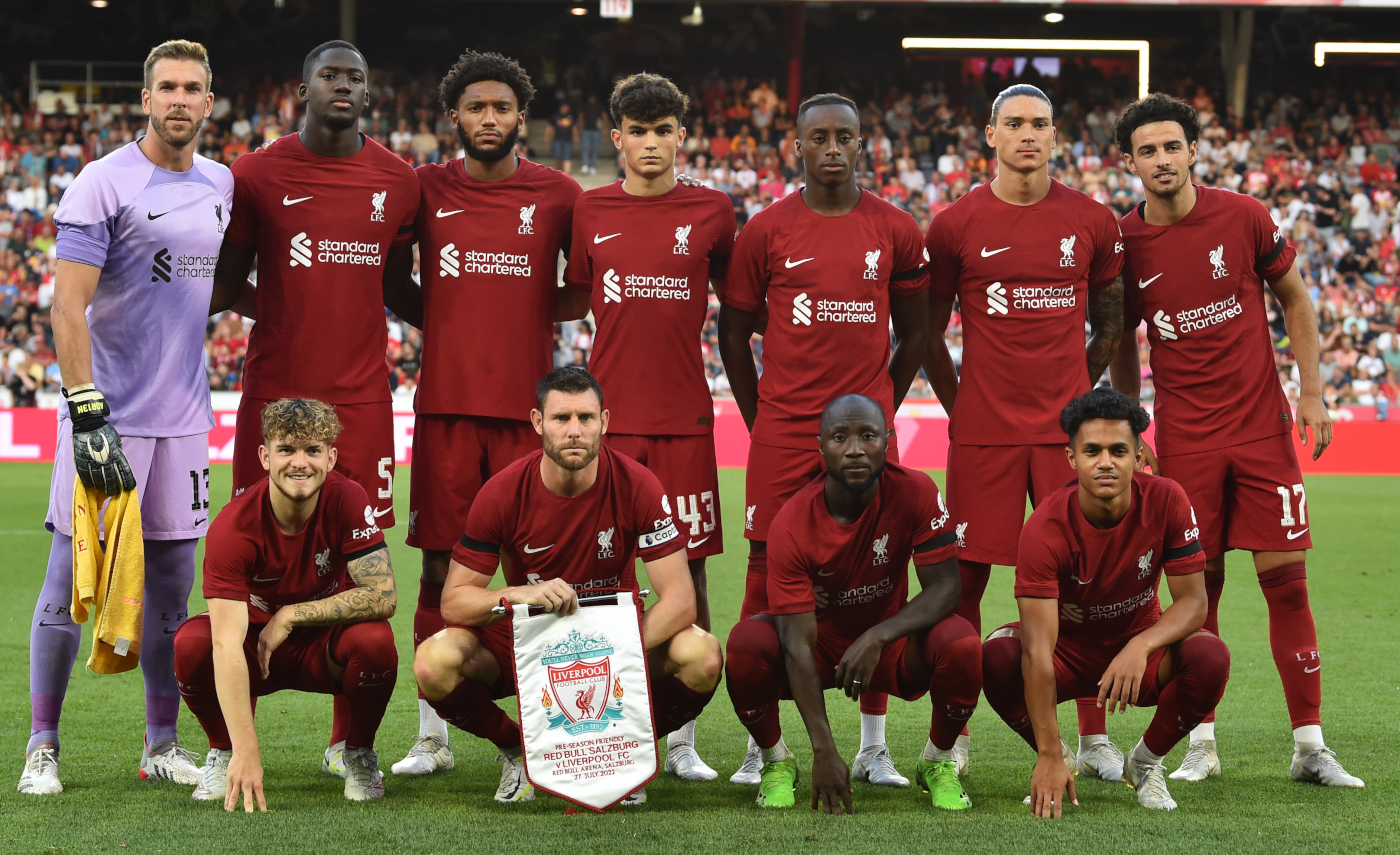 At the midway point of the half Nunez again escaped his markers to deftly bring down Naby Keita’s knock over the top, but he was eventually thwarted by Oumar Solet and Bernardo as he tried to shimmy into a position to strike.

The No.27 then hit the crossbar with a firm drive on the angle having moved on to Isaac Mabaya’s nudged pass into the right channel of the area.

Salzburg should have broken the deadlock within seconds. Sesko pounced when Gomez misjudged a headed clearance and, after stepping around several tackles, saw his finish denied by Adrian. A near-empty goal waited for Fernando on the rebound, yet he clipped wide.

Slick approach play by the Reds allowed Keita to slide in Nunez to his right inside the box and the striker fired at goal only to see the effort blocked at the last.

But the hosts made no mistake in the 31st minute. Sesko spun away from Ibrahima Konate near the centre circle, exchanged passes with Noah Okafor and swept a clinical finish around Adrian for 1-0.

Adrian soon had to palm away a 20-yard curler from Luka Sucic and Fernando had the ball in the net from an offside position as Salzburg ended the period in buoyant fashion. 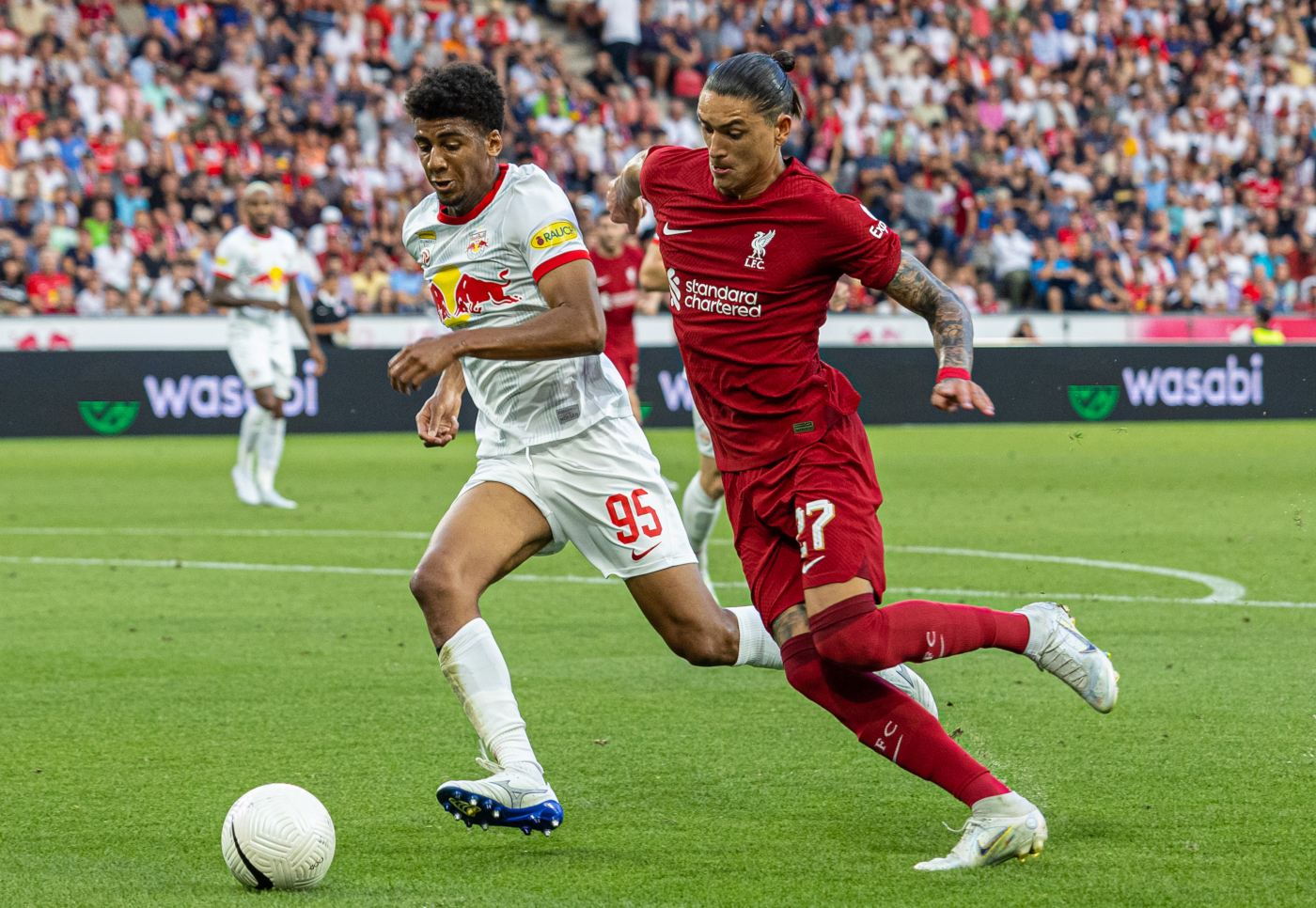 There were three Liverpool changes when the sides returned, with Andy Robertson, Roberto Firmino and Tyler Morton replacing Milner, Nunez and Keita.

Elliott sent a promising free-kick over the goalframe early in the second half and Carvalho’s clip across the six-yard area caused concern until Curtis Jones’ strike was blocked.

Diaz was immediately on the front foot and from a speedy dribble along the left flank he started what would become a real chance to equalise.

The Colombia international pulled the ball back to Thiago, he moved it on to Henderson and the skipper in turn back to Diaz, whose prodded attempt was repelled by the right leg of Mantl.

Junior Adamu struck too high from a decent position on the counter, before Salah’s near-post finish was saved by Mantl and Firmino’s curler halted by the Salzburg goalkeeper.

By now the contest had settled into one of Liverpool attack versus Salzburg defence and the latter held firm to secure victory for the home side despite a series of late chances.

Fabinho fired straight at Mantl from the edge of the box, a cool Diaz conversion was chalked off for offside, and an Alexander-Arnold long-ranger was tipped out by Mantl.

Last-minute claims for a penalty were also rejected as Diaz went down under the challenge of Youba Diarra, who appeared to touch the ball too, inside the opposition area.