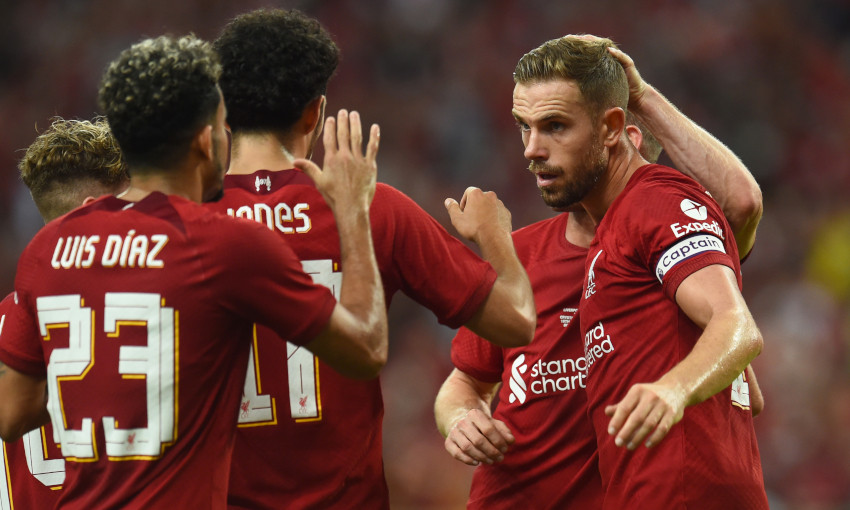 Jordan Henderson and Mohamed Salah got the goals as Liverpool beat Crystal Palace 2-0 in Friday’s pre-season friendly in Singapore.

The Reds dominated from first whistle to last at Singapore National Stadium, with Henderson’s goal arriving early on before Salah notched soon after half-time.

Jürgen Klopp made 11 substitutions at the break and a further nine with around 15 minutes to play as more valuable match minutes were shared around the squad.

However, Alex Oxlade-Chamberlain was forced off shortly before the interval with an apparent muscle issue, the midfielder therefore joining injured trio Alisson Becker, Joe Gomez and Diogo Jota on the sidelines.

A starting line-up featuring the likes of Joel Matip and Luis Diaz along with Henderson was in the ascendancy from the off and the skipper’s goal came after just 12 minutes.

James Milner located Harvey Elliott and the No.19 provided a cut-back from the byline that Henderson met with a precise, first-time finish into the far corner.

Oxlade-Chamberlain then pulled up immediately after taking a shot, forcing Klopp to make a substitution before he then implemented a further 11 changes at half-time.

Virgil van Dijk, Darwin Nunez and Trent Alexander-Arnold were among those brought on and the right-back was instrumental in Liverpool’s second goal, which came a minute into the second period.

Salah and Alexander-Arnold linked up with a slick one-two and the Egyptian duly found the net with the aid of some suspect goalkeeping from Guaita.

The Palace ’keeper made amends by tipping Fabio Carvalho’s placed effort wide, and the No.28 was one of two players, alongside Salah, to stay on the pitch following another nine substitutions made with 13 minutes remaining.

Liverpool’s tour of Asia ended with a comfortable win, then, with their next outing a friendly against RB Leipzig in Germany next Thursday.