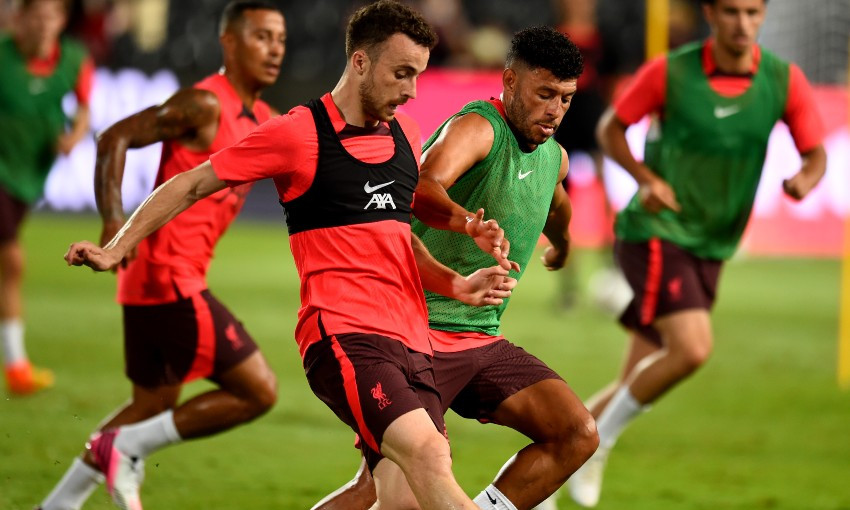 Diogo Jota has suffered a setback in his recovery from a hamstring injury.

The forward missed Liverpool’s opening pre-season friendly of the summer against Manchester United in Bangkok due to the issue he sustained while on international duty with Portugal in June.

And Jürgen Klopp suspects a recurrence of the problem may have occurred on Jota’s return to full team training on Wednesday evening.

“So, Diogo is unlucky. Diogo was not involved [against United] because of an injury he got at the end of his season,” the boss said during a press conference at Singapore National Stadium on Thursday evening.

“He trained yesterday fully and got injured again, so that’s really not cool but we have to wait for the results. He had further assessment this morning so we have to see.”

When asked if Jota has again damaged his hamstring, Klopp replied: “We will see. The same region, yes.”

The manager, who was previewing Liverpool’s friendly against Crystal Palace in Singapore on Friday, also revealed a fitness issue for Alisson Becker.

He said: “Ali was not 100 per cent, he finished the session earlier, was doing the warming up and felt something so now there we have to wait as well. I think pretty much all the others are fine, so that’s it.”

Klopp used a total of 32 players during the defeat by United in Thailand’s capital, with no outfielder playing more than 30 minutes.

Of his selection plans for the meeting with Palace, Klopp stated: “Some might get 45 minutes tomorrow, we have to see, but again it’s the period of the year where we have to be really careful with different things.