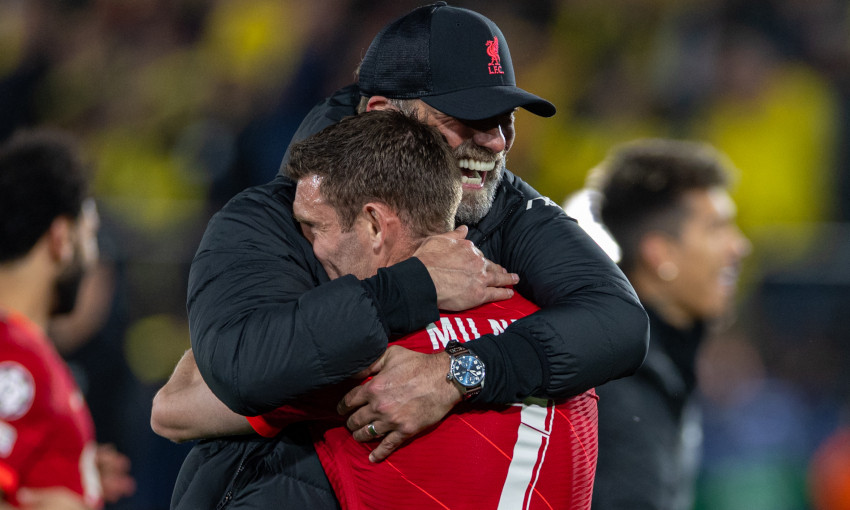 Jürgen Klopp has explained why he is delighted and grateful James Milner has extended his contract with Liverpool for another season.

The No.7 will continue his hugely successful spell at Anfield, which began when he arrived on a free transfer in 2015, after agreeing fresh terms.

Milner featured in 39 games for the Reds during a 2021-22 season in which they lifted the Emirates FA Cup and Carabao Cup while also finishing as narrow runners-up in the Premier League and Champions League, as they played every available fixture.

On a personal level, the midfielder passed 800 matches in his professional career, and his impact both on and off the pitch remains cherished by those around him at Liverpool.

We are delighted to announce that @JamesMilner has signed a new contract extension with the Reds 🙌🔴 https://t.co/uaSHd0W4nJ

“I am delighted by this news. It’s important for us – all of us,” Klopp told Liverpoolfc.com.

“A lot is often made of James’ leadership skills and his influence in the dressing room, and of course that’s correct and justified, but nobody should overlook his quality on the pitch, where he continues to perform to a level that meant we simply couldn’t afford to lose him.

“His professionalism is the benchmark for any athlete and it’s why he sets the tone for this team with his ability and attitude.

“We had the longest campaign possible last season and Millie only got stronger and better and more influential as it went on.

“Typically, the discussions we had around extending his contract were centred on: what kind of contribution do we see him making as a player?

“My answer to him was the same I’ll share with supporters: we don’t limit it. We just want the same from him again, because that’s not possible to replace. He can still do it and we still need it.

“So I’m grateful he answered the call and agreed to give us the extra year of his extraordinary career. More to come.”