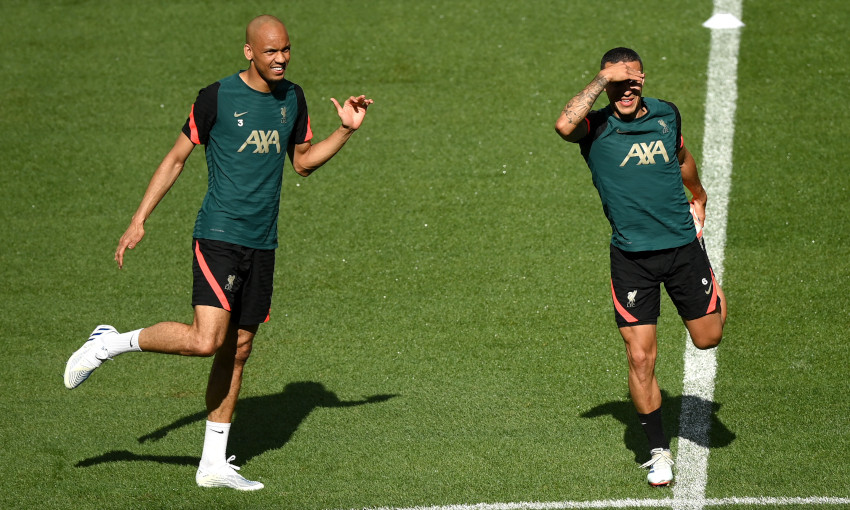 Liverpool are hopeful Thiago Alcantara and Fabinho will be available for selection for Saturday's Champions League final against Real Madrid.

The duo have resumed full training this week after respective muscular issues and were part of the Reds’ squad that underwent a workout at Stade de France on Friday afternoon.

Jürgen Klopp told his pre-match press conference in Paris: “Looks good for both.

“Fabinho trained completely normal. Thiago trained yesterday with the team, will train today and then we go from there.”

Likewise, Joe Gomez has returned to training, meaning Liverpool’s only absentee is Divock Origi, who Klopp confirmed last week would be ruled out of the final due to a muscle issue sustained during a shooting drill at the AXA Training Centre.

The clash – the Reds’ 63rd competitive fixture of the season – is, of course, a rematch of the 2018 showdown in Kyiv, where Klopp’s men were beaten 3-1 by Real.

The boss was asked during his preview with the media if he would consider springing a ‘surprise’ on the opposition with a personnel or tactical change.

“I believe when you do the right stuff all the time then it is the right thing to do in the final as well. But, it has to be on the highest level possible,” he replied.

“We obviously played some really, really good stuff this season, we are not here by surprise or we got a ticket or something like that – we deserved it as well.

Real arrived in France on Thursday having named a 26-man squad for the journey.

David Alaba is likely to come back into contention having sat out the draw with Real Betis on May 20 due to an adductor issue.

Carlo Ancelotti revealed during his press conference that he has already decided upon his starting XI but not yet communicated that to his team.

“We need to play a game in which we show our qualities,” said Ancelotti. “We need to show everything we have shown this season. The side has been both collective and individual at times this season, the whole squad has been superb.

“Liverpool will look to play an intense game, they’ve got a lot of individual quality. They’ll want to play their game and we’ll want to play ours. Whoever can show their quality the best will win.”