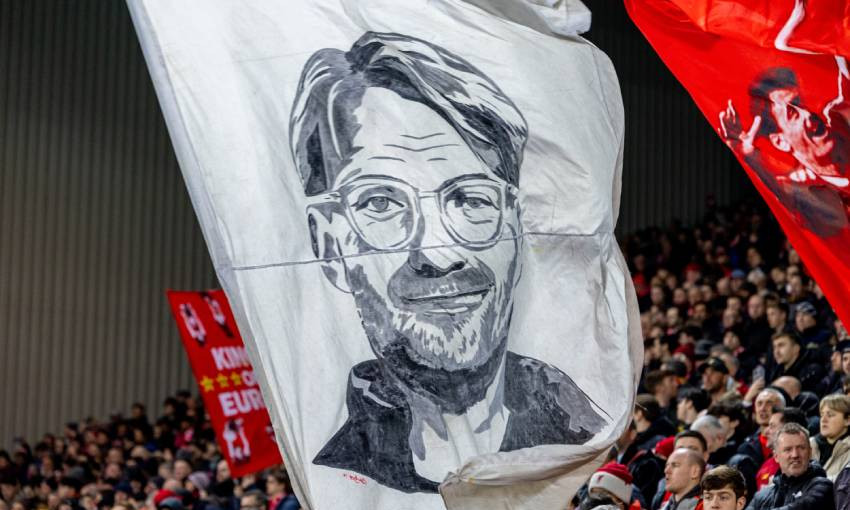 Everyone associated with Liverpool Football Club is glad that Jürgen Klopp is a Red.

The German's connection to one half of Merseyside has been forged over his whirlwind six-and-a-half-year tenure in charge at Anfield.

Klopp has brought success on the pitch in the form of trophies, while off it his personality has shone through alongside being an important figurehead for the club's recent resurgence.

The boss gets Liverpool, and Liverpool gets him – a partnership that has become a match made in heaven.

Perhaps, then, a song adapted from The Beatles in ode to the man in the Reds dugout is only fitting.

In the words of the boss, the atmosphere was 𝙤𝙪𝙩𝙨𝙩𝙖𝙣𝙙𝙞𝙣𝙜 👏 https://t.co/zSwnRAG3Wa

"It was done in like 30 seconds to a minute," writer Tony Seed told Liverpoolfc.com. "There wasn't much to it, to be perfectly honest."

Tony was sat in the St Hilda Pub on Walton Road – a stone's throw from Stanley Park – when I Feel Fine came on the record player one Sunday afternoon.

It is a song the city of Liverpool knows all too well and one that just days later would be sung on the Kop for all to hear.

This time, though, the lyrics were rewritten for a manager who has brought six trophies back to Anfield already – including a sixth European Cup and a first top-flight title for 30 years.

"I know Klopp didn't want a song, he doesn't like the attention put on him, but he doesn't really get a choice because everyone loves him," Tony continued.

Tony and his friends often gather in the pub pre- and post-match, putting the world to rights and having a sing-song about their favourite football team.

They can often be heard trying out new versions of classics to bring to the match, though their latest one was different from the very start.

"My mates kept telling me to sing it at places and get up and sing it on the mic," Tony said. "I was refusing, so one of them, Dan Haygarth, finally took it and sang it for everyone.

"I put the words to it and we recorded it on a phone just messing around. But it's down to him really that it's gone as mad as it has. He was obsessed with it.

"One of the lads recorded it when we were in Lisbon before Benfica after we got a crowd singing it and it just took off. We couldn't believe it.

"We were just having a laugh with it. Honestly, we didn't think it was any good.

"It was the next day and my mate's dad was with us and he said it had 200,000 views on TikTok. I didn't even know he knew what TikTok was!

"He was telling us everything about it. It went on Twitter, Facebook and everything. By the time we got back for the next home game, it was getting sang on the Kop, which was just crazy."

The song has become somewhat of an anthem for a season that will culminate with tomorrow's Champions League final in Paris against Real Madrid.

Klopp's men have lifted both the Carabao Cup and Emirates FA Cup this term, and the adaptation goes someway to telling the impact he has had since delivering on an initial promise.

Banners with the revised lyrics have appeared across houses in the city, while flags and shirts have been proudly displayed and worn by fans both near and far.

The boss thanking the travelling Kop, who are still in fine voice at the Etihad 🔴👏 https://t.co/QYSXs3gqdQ

Klopp also gave the tune a nod during the recent announcement of his new contract at Liverpool, having already revealed his love for the version.

It is now a matchday staple for the Reds – whether at home or away – and will be for the foreseeable future while the boss remains in charge.

"It's good to see how much it has taken off. It's all a bit mental. I don't know how it has happened, but it has," Tony laughed.

"It's good to have a Beatles song on the Kop. They obviously had a big influence in the city, so it keeps it going.

"It was good to roll back the years with it. It shows it's still part of the culture of the city – everyone is still brought up on them.

"Songs usually take a while to get going, but it's obviously catchy because Anfield had it within days. It took off big style, and here we are."

Klopp, The Beatles and Liverpool; the perfect mix for feeling fine.