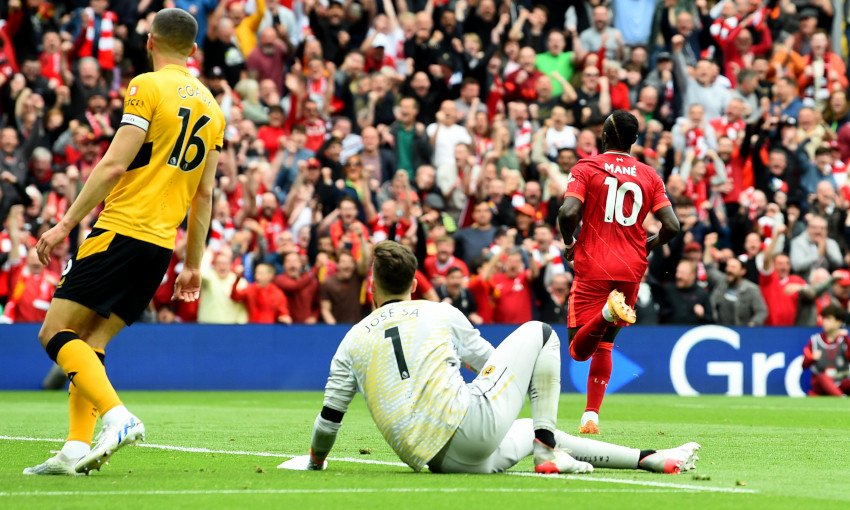 Liverpool came from a goal down to beat Wolverhampton Wanderers 3-1 as they finished the Premier League season in second place.

Pedro Neto stunned Anfield with an early opener for the visitors, but Sadio Mane netted midway through the first half to haul his team level.

Amid unbearable tension, the Reds completed their comeback in the 84th minute thanks to Mohamed Salah’s close-range finish and Andy Robertson rasped in a clinching third.

But Manchester City’s own turnaround in a 3-2 victory against Aston Villa meant they held on to top spot and took the title for 2021-22.

There were seven changes for Liverpool from the midweek win at Southampton, while Salah and Virgil van Dijk were fit to take places on the bench.

In the final home fixture of an incredible 2021-22 season, Liverpool were greeted by a brilliantly charged atmosphere inside a hopeful Anfield.

They suffered the worst possible start, however, as Wolves took a third-minute lead.

Ibrahima Konate misjudged a long goal-kick, which Raul Jimenez collected in behind the Reds defence and squared across the box for Neto to tuck beyond Alisson Becker from yards out.

Liverpool tried to rally quickly as Joel Matip glanced a header wide from Luis Diaz’s delivery after a recycled corner.

Diaz was then released into a one-on-one situation against Jose Sa from Matip’s excellent forward pass, but Wolves cleared when the Colombian tried to knock the ball around the goalkeeper. 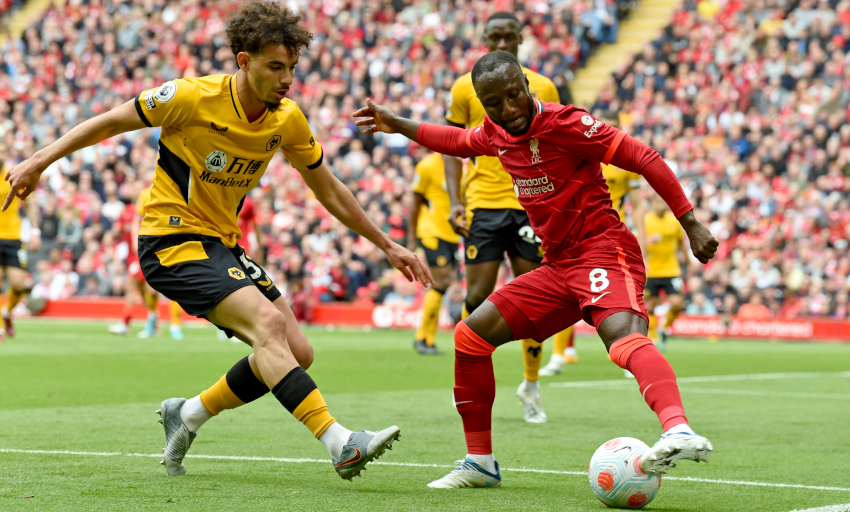 Next, Robertson picked out Diaz’s burst into the opposition area, only for his cutback to find no teammate, and then Naby Keita saw a drive blocked by Conor Coady in the box, with claims for an earlier handball dismissed.

The visitors threatened to double their lead on 18 as Neto broke away down the left wing and served the arriving Leander Dendoncker, who swept wide of the near post.

Instead, the Reds struck back.

Konate’s forward pass was beautifully redirected by Thiago Alcantara with his heel to allow Mane to bound through, open up his body and curl a lovely finish around Sa and inside the left post.

Robertson side-footed too high from Jordan Henderson’s lofted pass and then, as news filtered in that Villa had taken the lead at City, the hosts needed a crucial save from Alisson in a duel with substitute Hwang Hee-Chan.

A frantic half ended with another setback for Liverpool, though, as Thiago hobbled off with an injury.

Jürgen Klopp’s men emerged with James Milner now part of the XI in place of Thiago, and chorused by a rendition of You’ll Never Walk Alone from the home fans.

And the Reds had the ball in the net within five minutes of the restart, Mane dinking it over Sa from Diogo Jota’s tee-up, but having been in an offside position.

A similarly incisive pass into Wolves territory from Trent Alexander-Arnold then allowed Mane to sprint in again; the No.10 went down under the challenge of Coady – with penalty claims waved away – and Jota’s follow-up was blocked.

Klopp introduced Salah from the bench as the hour mark approached and Alexander-Arnold’s thump from distance soon had to be gloved away by Sa.

Liverpool fashioned their best chance to go ahead yet when Keita’s through ball reached Salah, only for the Egyptian to be thwarted by a last-ditch challenge.

Anfield erupted with noise as supporters realised Villa had gone 2-0 up against City, and Roberto Firmino took to the field for the final 20 minutes.

Wolves continued to cause the hosts problems, however, and Alisson tipped over the crossbar when Hwang let fly with a fierce strike from the right channel.

With the Reds fully committed to attacking for the winner, the away team enjoyed a succession of counter-attacking chances – but it was Liverpool who found it six minutes from time.

Matip climbed brilliantly to head Alexander-Arnold’s corner at goal, which was cleared off the line, but from the ensuing scramble Salah forced the ball into the net.

A minute from the end, Robertson secured all three points for the Reds as he moved onto Firmino’s set-up and rifled a strike across Sa into the right corner.

But it was not enough for Klopp’s relentless team as City had recovered from their deficit to win 3-2 and pip Liverpool to the league title by a single point.