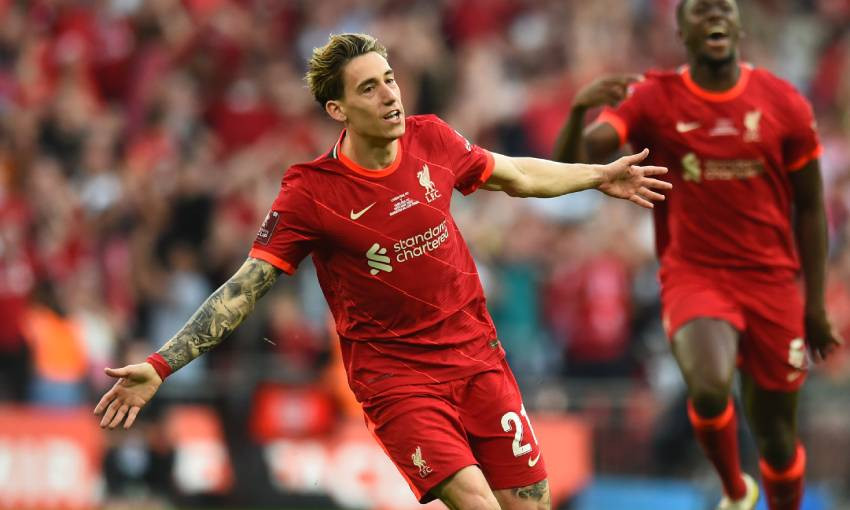 Liverpool won the 2021-22 Emirates FA Cup after defeating Chelsea 6-5 in a penalty shootout during Wembley’s final on Saturday evening.

Extra-time substitute Kostas Tsimikas netted the decisive spot-kick to win the crown for the Reds after Alisson Becker had saved from Mason Mount in sudden death.

Nothing could separate the two teams after a tense and goalless 120 minutes of action in the capital.

But Jürgen Klopp’s men emerged victorious in the shootout – as they did in the Carabao Cup final against the same opponents – to lift the trophy for the eighth time in the club’s history.

Klopp opted to make five changes, with Ibrahima Konate and Andy Robertson coming into the XI.

Thiago Alcantara and Jordan Henderson were back in the midfield, as Mohamed Salah started up top.

Liverpool created a trio of goal-scoring opportunities in the opening nine minutes, all of which involved the lively Luis Diaz.

First, the No.23's drilled ball across the face of goal was just inches away from the outstretched boot of Thiago. In a similar situation moments later, Salah was unable to connect with Diaz's cut-back.

The Reds' best chance of the half saw Diaz sent through on goal by a brilliant outside-of-the-boot pass from Trent Alexander-Arnold.

Edouard Mendy could only half-save the forward's resulting finish, though Trevoh Chalobah was on hand to clear before the ball trickled over the line. Naby Keita then pounced on the loose ball but fired wide.

Then it was Chelsea's turn to attack. Christian Pulisic glanced a shot just past the far post, as Alisson then bravely saved from Marcos Alonso's charge into the box.

Liverpool were then dealt a blow when Salah fell to the turf and was unable to continue.

His replacement, Diogo Jota, nearly flicked in from close range off Robertson's cross prior to the end of the half.

Chelsea flew out of the blocks following the interval.

Alonso went close twice, dragging a shot wide and striking the crossbar with a whipped free-kick from a tight angle. In between those efforts was a vital save from Alisson to deny Pulisic.

At the other end, Robertson couldn't adjust to send Alexander-Arnold's cross towards goal and Diaz fired fractionally wide, as the Reds responded.

In the final quarter of an hour, Alexander-Arnold produced a perfect sliding challenge to poke the ball behind for a corner just as Pulisic was about to fire at goal.

Liverpool were denied by the post on two occasions within a matter of moments. Diaz clipped the outside of the right stick with a well-hit shot, as Robertson then stretched to meet James Milner's whipped delivery, only to watch his diversion strike the woodwork and bounce clear.

As the clock struck 90, Diaz again came close to breaking the deadlock. His curling effort from outside the bend went agonisingly wide.

Liverpool would play the additional 30 minutes without Virgil van Dijk, who was replaced by Joel Matip.

It was a tense opening 15 minutes, with only Mount producing the sole shot of the first half.

And a similar story in the second ensured the destination of the trophy would be determined via spot-kicks.

Cesar Azpilicueta was the first to miss in the shootout, but then Mendy kept out Sadio Mane's effort to keep Chelsea in it.

However, after Alisson's strong palm kept out Mount's hit, Tsimikas calmly stepped up and sent the Chelsea goalkeeper the wrong way to spark jubilant scenes among players, staff and supporters.