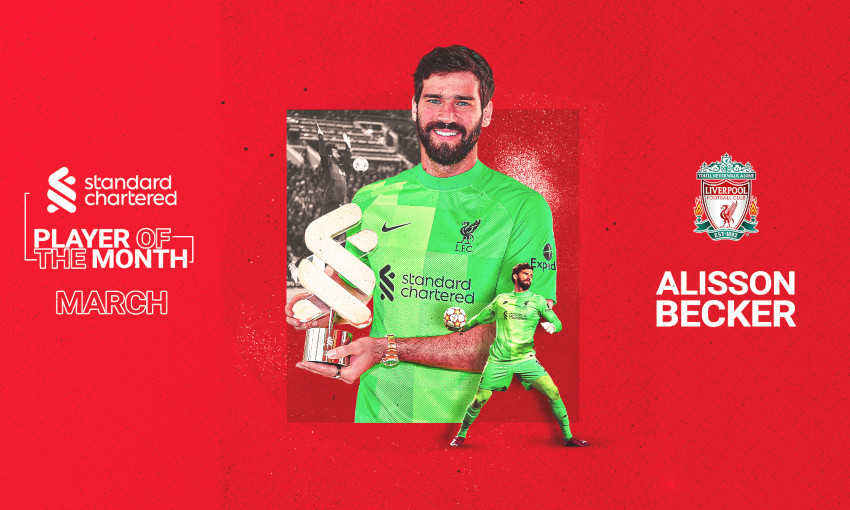 Jürgen Klopp: It's great, but it's business as usual for us

Alisson Becker has been voted Liverpool's Standard Chartered Men's Player of the Month for March.

The goalkeeper claims the prize for the first time in his Reds career after a vote from fans and Forever Reds, the club's official former players association.

Alisson played in all six of the team's fixtures during March, recording four clean sheets from their five wins and conceding just twice.

After collecting the award at the AXA Training Centre, the No.1 told Liverpoolfc.com: "I just can say that I'm really happy to be playing and performing the way I'm playing, the way we are playing as a team as well.

"The way the team performs helps me a lot in my individual performances, so everything is connected.

"I'm working hard every day to be always on my toes and always ready when they need me."

Read on for the rest of our interview with the Brazilian…

The team has only conceded four goals in the last 14 games. Has something changed?

I think this is a system [where] we are conceding less goals than the other seasons. Obviously during the season maybe your start is not really so good in terms of performance – you get the results, yes, but there's always something that you can improve. The defensive aspect was something that we could improve a lot. And now, I think we did that step and I'm really happy with that – not only my contribution but from the whole team, from the way we play and the way we approach the games.

From March, the one save from you that sticks out is from the Arsenal game to deny Martin Odegaard. It felt so huge as you made the save and then the goals came soon after...

When this happens, when you make a save and then you score minutes after, it's always amazing because the feeling of your contribution looks bigger, feels bigger than it normally is. But just the feeling, a save in the beginning of the match and scoring in the last minute, is the same importance. But those kind of things give us, as a team, a good feeling that the system is working, all the players are performing at a top level. It was a good save and also a good goal after.

How important is concentration as a Liverpool goalkeeper? Because so much of the match can be at the other end of the pitch and often it's just one big save you have to make...

I think in the last games it's what's happening in the games – maybe just one or two saves. But I'm there for everything, I'm prepared for that. I play for Liverpool, a big team who plays more on the opposite side of the field, always attacking more than the opponents and creating more chances. But we are, as well, a team who plays [with] a high line and sometimes the opponents also have quality and they can come and have opportunities. I need to be ready. I'm always looking at what is happening in the game, eyes on the ball, always trying to participate somehow with high positioning as well and plenty of talking with my defenders to be ready to maybe make only one save in the game.