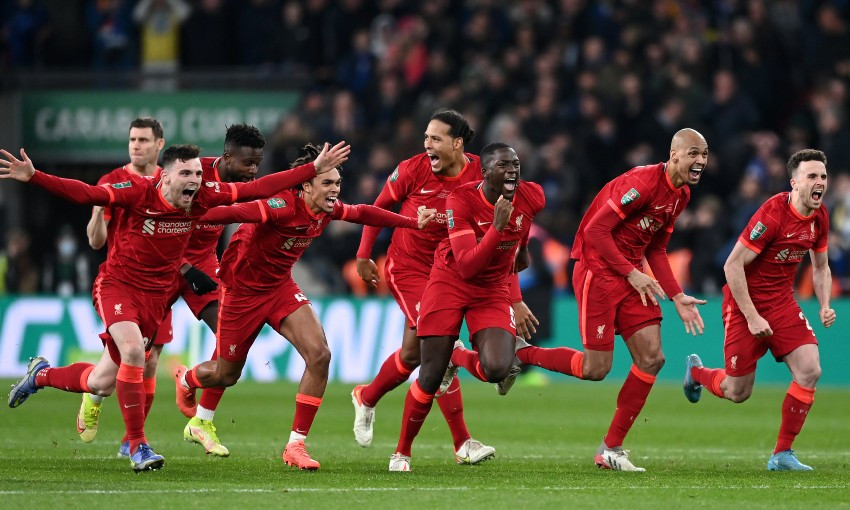 Liverpool beat Chelsea 11-10 on penalties to win the Carabao Cup after Sunday’s final at Wembley finished goalless after extra-time.

All 11 of the Reds’ takers, including Caoimhin Kelleher, converted their spot-kicks before Kepa Arrizabalaga blazed his over the crossbar to seal the fifth major trophy of Jürgen Klopp’s glorious reign.

Both teams had goals – headers from Joel Matip and Kai Havertz – disallowed in regulation time of a close-fought clash, and Romelu Lukaku and Havertz were denied extra-time winners by the offside flag.

Kelleher and Edouard Mendy - replaced by Kepa ahead of the penalties - each made several crucial saves to force the shootout, which was settled when Chelsea’s goalkeeper fired into the delirious Liverpool end of Wembley.

Kelleher and Jordan Henderson came into the line-up as Klopp initially made two changes from the midweek rout of Leeds United.

However, the boss was forced into a third alteration when Thiago Alcantara picked up an injury in the warm-up, with Naby Keita replacing the No.6.

Diogo Jota was named among the substitutes following his ankle problem.

Chelsea enjoyed the better of the opening 10 minutes and a superb reflex save from Kelleher was required to prevent Thomas Tuchel’s side from taking an early lead.

Cesar Azpilicueta found Christian Pulisic with a low delivery and the forward appeared certain to score from point-blank range, only for Kelleher to pull off a brilliant stop.

Liverpool soon settled and turned the tide of momentum, though.

A peach of a delivery from Trent Alexander-Arnold located the darting run of Sadio Mane - again playing at centre-forward - but the No.10 miscued his header.

Luis Diaz was a constant menace down the Reds’ left and he engineered Mohamed Salah’s first sight of goal of the afternoon; the Colombian’s pass was deftly redirected by Henderson into the Egyptian’s path and his subsequent first-time hit was blocked.

The pressure on Chelsea’s goal was ramping up and Mendy produced a stunning double save on the half-hour mark.

The Blues’ goalkeeper first palmed away Keita’s low drive from the edge of the area before somehow getting to his feet quickly enough to divert Mane’s follow-up attempt to safety.

Chelsea remained a threat on the counter, however, and Kelleher once again denied Pulisic prior to Mason Mount shooting wide from close range at the conclusion of an absorbing first half.

Again Chelsea began the half in the ascendancy and Mount went so close to breaking the deadlock within five minutes of the restart, the England international hitting the inside of the post with a scuffed low effort.

But, just as had been the case in the first period, Liverpool grew into the half and asserted a measure of control that brought with it several chances.

A one-on-one between Salah and Mendy ended with the former dinking a delicate shot over the latter, but Thiago Silva had raced back to slide the ball to safety.

The Reds appeared to have edged ahead soon after when Matip nodded into the roof of the net after a well-worked free-kick routine that saw Alexander-Arnold find Mane, but the goal was disallowed for a fractional offside against Virgil van Dijk following a VAR review.

Diaz was then freed by a wonderful, first-time pass by Alexander-Arnold but, again, Mendy made the save to keep Chelsea level.

It was soon Chelsea’s turn to be frustrated by the flag as Havertz saw a back-post header ruled out for offside and Klopp then sought to freshen up his team with a triple substitution that saw Harvey Elliott, James Milner and Jota enter in place of Keita, Henderson and Mane.

There was still time for more drama in stoppage time, as Van Dijk’s header off an Alexander-Arnold corner was palmed away by Mendy before Kelleher reacted quickly to repel Lukaku’s front-post flick.

Predictably, the additional 30 minutes were tight and tense, with both teams evidently wary of over-committing in the knowledge that a concession would likely result in defeat.

Lukaku thought he had won it with a low finish eight minutes into extra-time, but the flag was raised, and Havertz was again offside when he slotted home in the second period.

The last opening of the 120 minutes was Liverpool’s, but Jota mis-kicked Andy Robertson’s cut-back and the final went to a shootout, which concluded with Liverpool winning their record ninth League Cup.