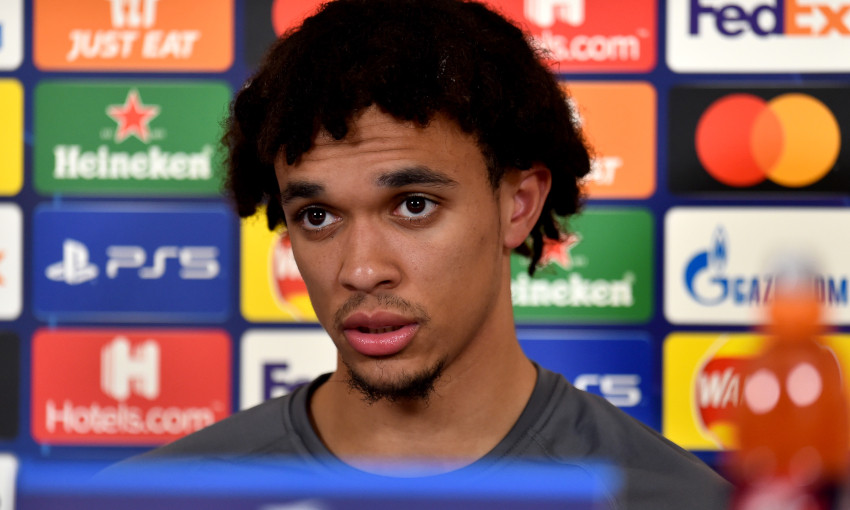 Trent Alexander-Arnold insists he has plenty of personal improvement ahead of him and hopes to again flourish further in the final stages of the season.

The Liverpool right-back has delivered 15 assists already in 2021-22, a campaign in which Alexander-Arnold feels he has consistently been performing near his highest level.

Collectively, the Reds continue to compete across four fronts and they enter the knockout phase of the Champions League on Wednesday night with the first leg of their last-16 tie against Internazionale.

Already a Premier League and Champions League winner in his career, Alexander-Arnold was asked as he spoke to the media at a press conference to preview the game how much more he can develop.

“A lot more, I would say, a lot more,” he replied. “For me, I still see it as early days, I don’t class myself as a young player but in terms of career you’re looking at 15- to 20-year careers these days, hopefully. So I feel like I am only in the early stages.

“So there’s still a lot more, there’s still so much room for improvement, I still see I’ve got so much more potential to give and do and achieve.

He went on to add: “I feel like I’m playing good football at the minute, I’ve enjoyed this season so far.

“I’m looking to win trophies and help the team do that. So if that means playing as well as I can, which it will mean, then that’s what needs to be done. I’m excited to see what happens between February and May, a lot will happen, we just hope we’re on the happy end come May.”

Jürgen Klopp currently has the rare luxury of being able to select from more players than he can actually name in his matchday squad.

And Alexander-Arnold agreed that situation can prove a benefit as Liverpool tackle a hectic fixture programme that will include a Carabao Cup final at Wembley next weekend.

The No.66 also detailed how the help and support of the backroom staff at the AXA Training Centre is pivotal to keeping the players in prime shape to deal with the demanding schedule.

“I would say definitely on all four fronts it makes it easier now having so many great players in the team, but the season when we won the Champions League we almost won the league,” said the England international.

“So we have shown ourselves and people that we are able to compete on multiple fronts. But, yeah, to have a place in all four competitions at this point in the season is good for us.

“We’ve got a chance in a couple of weeks to add silverware to the season early doors, so that is what our focus is: making sure we are still in all four competitions for as far as we can go.

“I think that’s kind of normal now, modern-day players are expected to play the number of games. We as players want to play every game we can and we want to be in every competition, we want to win every trophy so if that’s what you want you’re going to have to play 50, 60 games a season and that’s something we are looking towards.

“We have got amazing backroom staff, physios, sports scientists, nutritionists that look after us as players, making it easier for us to cope with that. It’s about making sure we’re ready to play every game – and we’ve got the staff to support us doing that.”

A hard-fought 1-0 victory at Burnley amid testing weather conditions on Sunday reduced Liverpool’s gap to Manchester City at the Premier League summit to nine points, with a game in hand.

“I think we’ve always known we can win ugly, I think we’ve done that over the last few seasons,” said Alexander-Arnold. “Scruffy 1-0s away from home on days like Sunday, we’ve been doing that for years now.

“Obviously it’s not in our hands at the minute, so there is not much we can really do except win our games and see what happens. But anything can happen in this league so it’s important for us to make sure we are in a position to pounce if they do slip at some point.”