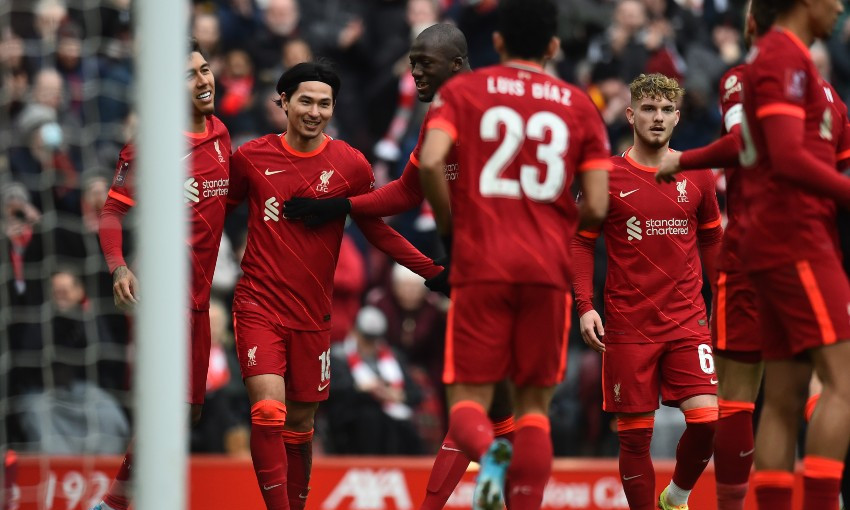 Liverpool to host Norwich City in FA Cup fifth round

Luis Diaz debuted while Harvey Elliott marked his return from injury with a goal as Liverpool beat Cardiff City 3-1 in the fourth round of the Emirates FA Cup.

New signing Diaz and Elliott, back in the squad for the first time since September, came off the bench together shortly after Diogo Jota had headed in the opener early in the second half of Sunday’s tie at Anfield.

And they both made their mark on the match, with Diaz teeing up Takumi Minamino to double the Reds’ lead and Elliott then firing in a third.

Thiago Alcantara also returned as a substitute on a satisfying afternoon for Jürgen Klopp’s side, who will host Norwich City in round five.

Liverpool’s starting XI included the likes of Caoimhin Kelleher, Virgil van Dijk and Jota, with Diaz, Thiago and Elliott the headline inclusions among the subs.

A lightning-quick turn and hit by Jota forced Cardiff goalkeeper Dillon Phillips into an impressive reaction save in the opening minutes, and Minamino then saw a goal ruled out for offside against Kostas Tsimikas in the build-up.

The visitors’ contentment to sit in and soak up pressure affected Liverpool’s ability to attack fluently, however, and despite their domination of possession, Klopp’s team were unable to keep Phillips busy.

Their final ball lacked the necessary quality to slice through Cardiff’s deep block – until, that was, incisive combination play between Minamino and Jota opened up the defence, only for the latter to take an air-shot at the former’s pull-back before Curtis Jones blazed over.

Anfield waited anxiously when Kelleher’s caution for fouling Mark Harris outside his area was subject to a VAR review seconds into the second period, but the card was not changed to red.

There was immediately a greater sense of intent and urgency about Liverpool’s attacking work and they made the breakthrough with 53 minutes on the clock.

Yet again, Trent Alexander-Arnold was Jota’s provider; the right-back this time floating in a free-kick that the Portuguese redirected into the far bottom corner with an adroit glance.

The introductions of Diaz and Elliott ensured the celebratory mood continued and, soon enough, both players would prove influential.

First, Diaz’s determination enabled him to win the ball back on the byline and the Colombian’s cut-back eventually found Minamino, who had ghosted into the box before dispatching a low finish.

Elliott’s moment arrived soon after, the No.67 bringing down Andy Robertson’s cross and firing in a brilliant half-volley and then celebrating with gusto in front of the Kop, who responded by chanting the teenager’s name.

There was further reason for cheer when Thiago came on for a late cameo, with Colwill’s late goal not dampening the home fans’ spirits as Liverpool advanced to a date with Norwich in round five.