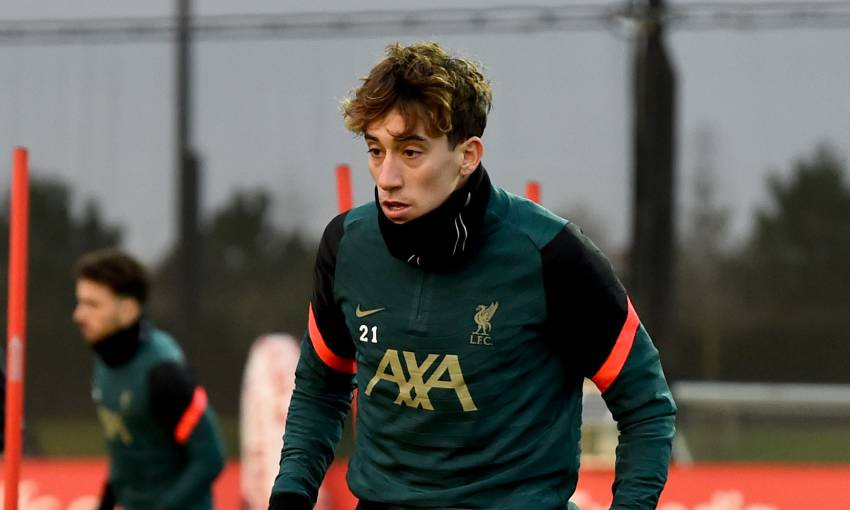 Kostas Tsimikas is confident the 'incredible' Luis Diaz will have a big impact at Liverpool after experiencing the Colombian's talents earlier this season.

The left-back faced the Reds' new No.23 at Anfield in November when FC Porto visited for the Champions League group-stage tie.

Though the hosts won the contest 2-0, the display of Diaz – who completed his transfer last weekend, subject to the successful granting of a work permit and international clearance – left a lasting impression on his new teammate Tsimikas.

"Everybody is looking forward to seeing him with the Reds," the Greece international told Liverpoolfc.com. "Obviously when we played against Porto, I think he was their best player.

"I'm looking forward to meeting him, speaking with him and to be here [for] whatever he wants. I'm pretty sure he will help us a lot.

"Obviously I didn't mark him but I really like his skills. He really goes for one against one, he didn't think too much. I like him a lot as a player.

"I like it when a player doesn't think too much and goes direct to score himself and to try to do something for his team. Hopefully I will see it here also. He's an incredible player."

Jürgen Klopp's options in the coming months will also be boosted by the return of Harvey Elliott, who is back in full training following his serious ankle injury.

"I'm very happy for him. We are very close," Tsimikas said of the 18-year-old. "Obviously when he got injured, I felt so sad for him. But finally he is here, he is healthy.

"You saw it from the start, he's 100 per cent OK, you saw again his skills. For us, it's very, very important as a team to have him back as a person and as a player also.

"We are very happy and I'm sure he will help us for the rest of the [season]."

If you haven’t seen already (cheers, Harvey 👀), our 💎 scored and got two assists as he continued his return to full… https://t.co/JbkMfMRq7k

Liverpool are back in action again on Sunday when they welcome Cardiff City to L4 in the fourth round of the Emirates FA Cup, having last played on January 23.

The break afforded Tsimikas the chance to recover mentally and physically after a busy period, using some of the time off for one of his favourite hobbies: fishing.

He revealed: "It was a great experience. Obviously I didn't catch any fish but I tried!

"I enjoy it a lot when I'm fishing and it clears my mind when you hear the water of the river. I enjoyed this week a lot.

"I fully recharged my batteries and I'm here to do everything. It was very, very important for me.

"Obviously I never get a week off because all the [other] times I was in the national team, playing games.

"For me and my family, it was very important. I walked a lot with my dogs and it was very helpful to recharge my batteries and to be ready for the next competitive games."

With progression to the Carabao Cup final already secured, Tsimikas is also targeting a long and successful journey in this year's FA Cup.

But he knows what's required of the Reds in their 12pm GMT kick-off with Steve Morison's Championship outfit in order to progress.

He concluded: "Every game for us is very important. Of course we [reached the final] of the Carabao Cup – why don't we go for the FA Cup also?