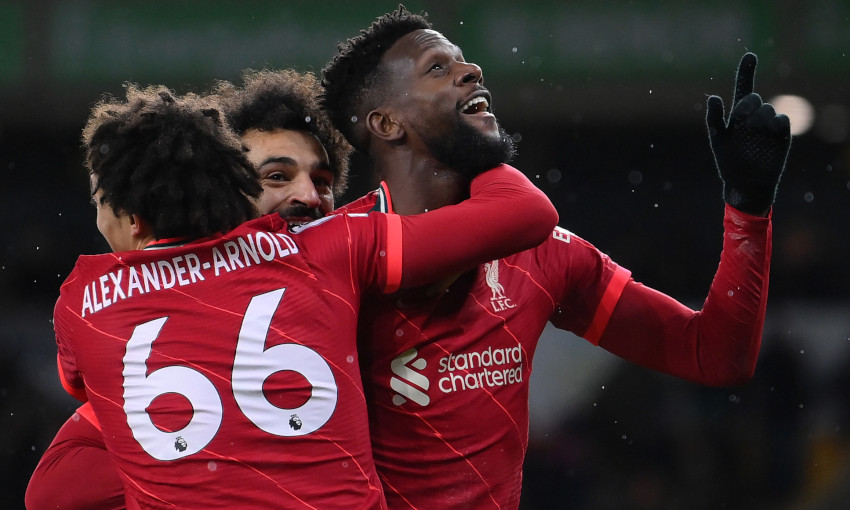 Substitute Divock Origi tucked in a stoppage-time winner to give Liverpool a dramatic 1-0 victory at Wolverhampton Wanderers on Saturday afternoon.

Diogo Jota had the Reds’ most promising chance in each half, sending a back-post header wide and later seeing a clear-cut effort at close range blocked on the goalline by home captain Conor Coady.

And there looked like there would be no breakthrough at either end at Molineux, until in the final seconds Origi spun inside the box and guided the ball home to grab a thrilling three points.

His late intervention meant Jürgen Klopp’s side ultimately capitalised fully on the defeat of Chelsea – who began the day top of the Premier League table – at West Ham United.

Klopp named an unchanged line-up, deploying the same starting XI as he did for the midweek Merseyside derby victory at Goodison Park.

Liverpool’s recent trips to Molineux have typically been tight affairs and the early exchanges here suggested similar, with scoring chances non-existent in the opening quarter-hour.

Klopp’s men continued to find little joy in their search for a route through, around or over the organised Wolves system, as the hosts waited for the opportunity to release their dangerous front three.

The Reds did get in twice in quick succession either side of the half-hour mark, though. 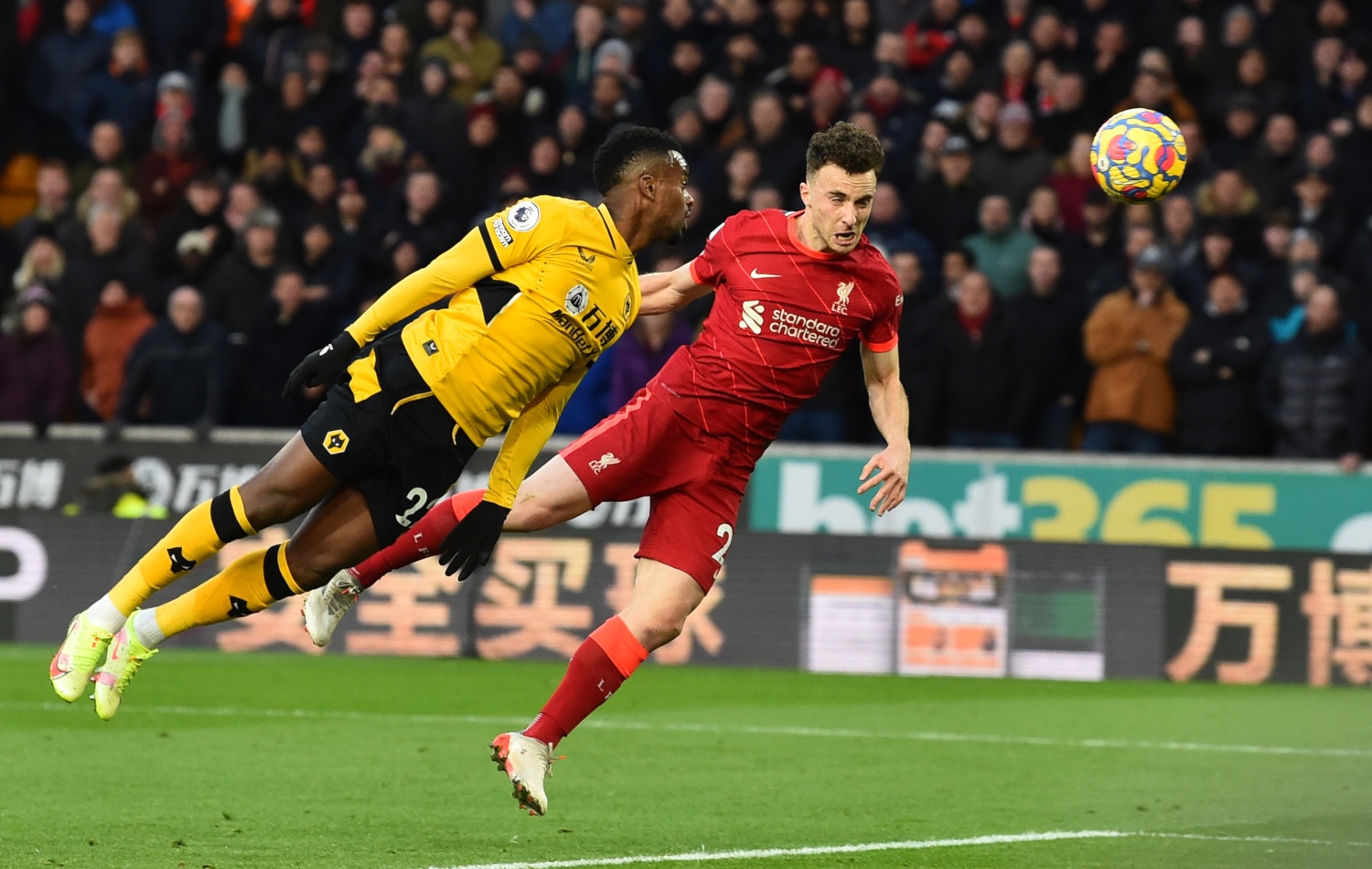 First, Thiago Alcantara’s hooked pass into the box evaded the head of Rayan Ait-Nouri and found the forward sprint of Alexander-Arnold. But the full-back’s first-time side-footer was too heavy and flew over.

Alexander-Arnold then turned creator, using Jordan Henderson’s dummy run on the overlap to send in a cross from the right corner of the area that reached Jota at the back post. He made firm contact with his header as he stretched but nodded it the wrong side of the goal.

The clearest chance of all came next. Jota picked a through ball to Andy Robertson on the left flank and his square across the box missed Sadio Mane and was heroically cleared by Romain Saiss before Mohamed Salah could convert.

Ait-Nouri sliced a shot well off target after slaloming into space from the left-hand side, meaning the half ended as it always seemed likely to: goalless. 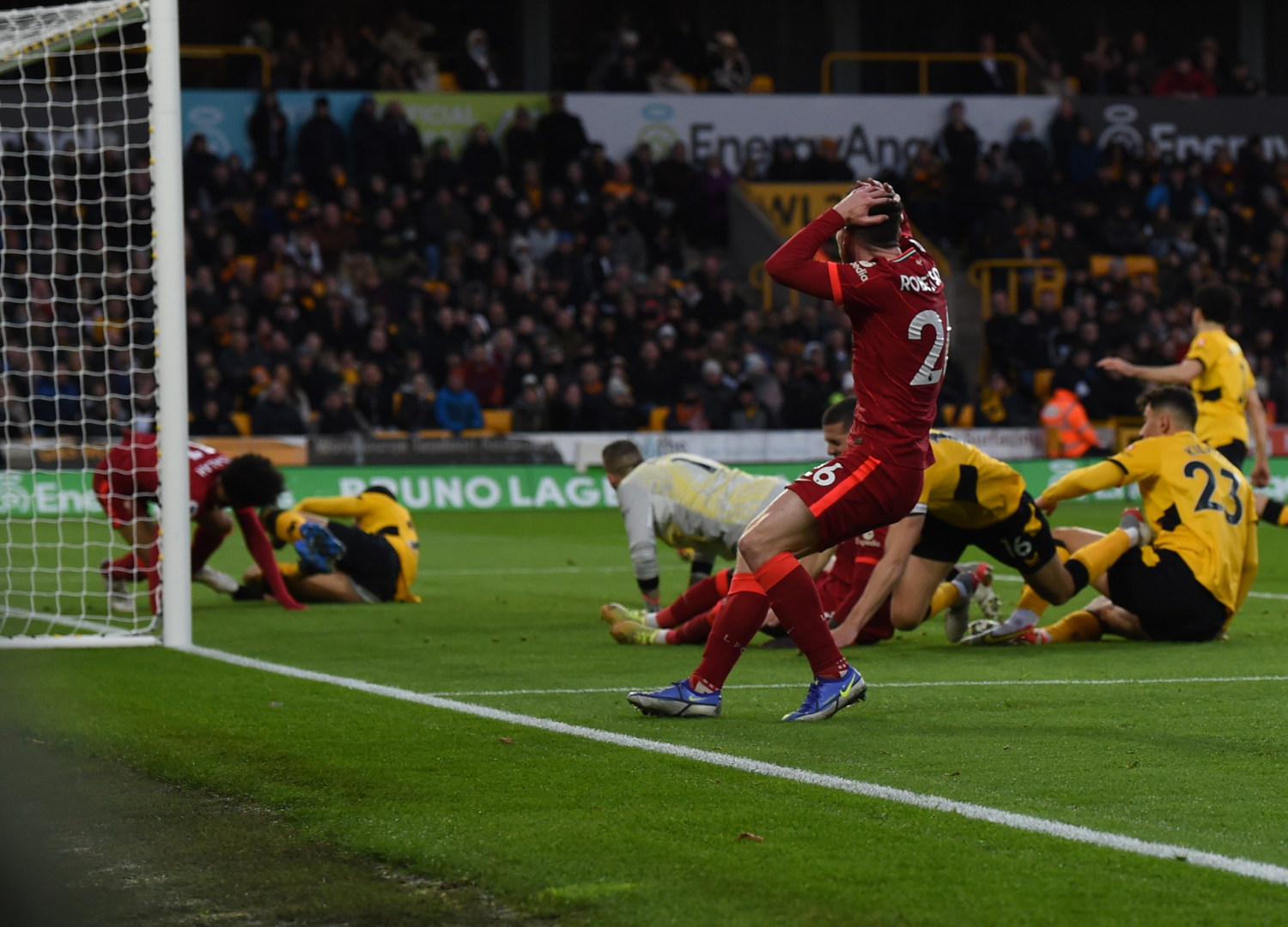 Wolves fashioned the initial threat when the game resumed. Adama Traore stole possession from Virgil van Dijk deep in Reds territory and tried to thread a pass inside to the supporting Hwang Hee-Chan, who was thwarted by Alexander-Arnold.

Immediately at the other end, Thiago was baffled as to how he did not score.

A lofted Alexander-Arnold cross was volleyed by Salah across the area to the midfielder, yards from the net. His first effort was blocked by Raul Jimenez, his rebound saved by Jose Sa.

Liverpool’s frustration was compounded significantly in the 60th minute.

Sa rushed out from his goal to the left channel as Salah chased down a forward pass and a mix-up ensued that allowed Jota to bear down on the net with the ‘keeper completely stranded.

Two Wolves players got back to the goalline in an attempt to prevent the Reds forward from finishing and his blast at close range was, remarkably, blocked by Coady.

Klopp soon introduced Origi from the bench to bolster the attack – with Henderson replaced – and the visitors mounted most of the pressure, Alexander-Arnold firing one decent shooting chance too high.

Sa produced a vital reflex save to push Mane’s prodded finish over the frame of the goal four minutes from full-time, but the final word went to Origi.

Play was spread out wide to Salah, who cut through from the flank and teed up his fellow forward to neatly turn and guide a low hit beyond Sa, prompting huge celebrations in the away dugout.