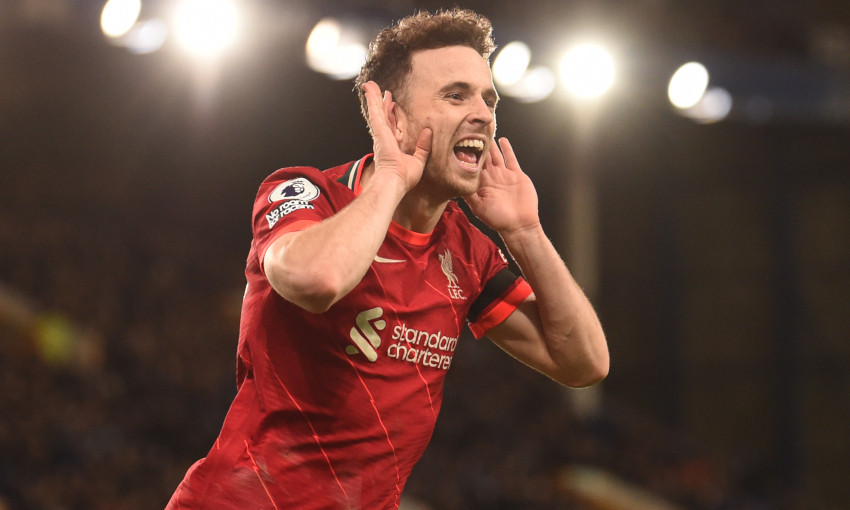 The Reds continued their ruthless recent form in the Premier League showdown at Goodison Park, netting four times in the fixture for the first time since 1982.

Jota sealed the victory with a deft turn inside the area that was followed by an unstoppable drive into the roof of the goal on 79 minutes.

Earlier, Jordan Henderson had started the scoring with a precise curler and Mohamed Salah helped himself to two more strikes either side of Demarai Gray’s consolation.

“I think it’s massive for us,” Jota told Liverpoolfc.com. “We know what it means to the fans to play a derby and they were here supporting us and it’s amazing for them – 4-1 away, it will be for history, I think.

“We knew they would come with everything and they tried to do that in the first minutes but we scored two goals.

“After that I thought we lost a little bit of control and we shouldn’t have conceded because it brought them back to the game, but then second half again well played from us, two more goals and none conceded, so well done.”

Jota’s goal – which opened his derby account since arriving on Merseyside last September – was an exquisite piece of control and finishing.

The pass from Andy Robertson was slightly behind the Portugal international as he waited inside the box, but his controlled flick took him past Allan and created the opening to smack a shot beyond Jordan Pickford.

“It was a good move and sometimes you just try things and they happen,” he said. “I was very pleased to settle the game and to basically kill the game at that point. So, we just keep on going now.”

It’s now four consecutive wins for Jürgen Klopp’s side since the November international break and they are also the first English top-flight team ever to score two or more in 18 successive fixtures in all competitions.

Jota and co have plundered a staggering 43 in 14 Premier League games so far this season, and the No.20 is hopeful such prolific numbers will be maintained.

He added: “At the moment we are scoring a lot of goals and I think that shows that we are doing the right things. People are getting goals, great goals, so that helps. I just hope we can continue like this for as long as we can.”