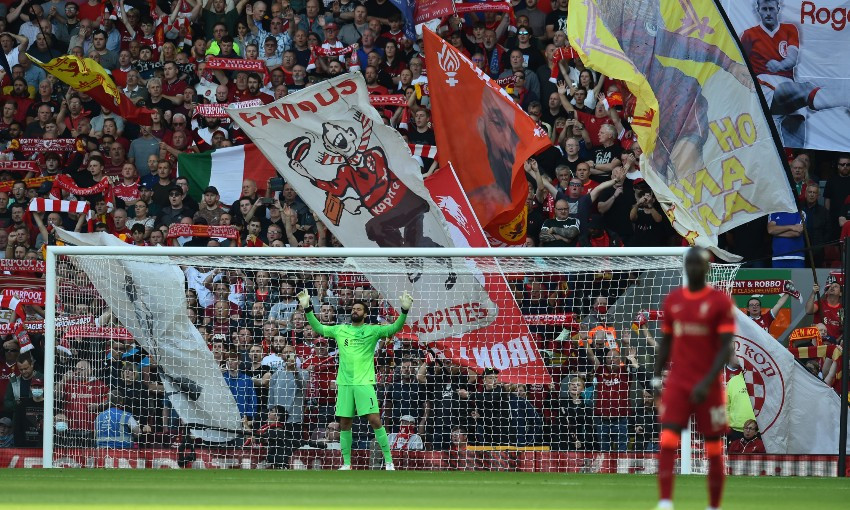 Alisson Becker has spoken of his delight at playing in full stadiums again this season.

“It is amazing,” the Reds’ No.1 told the official Liverpool FC magazine.

“I think football without fans is not football. The feeling you have to have your supporters with you on the pitch is fantastic, to have them on our side.

“They can be an extra player on the pitch for us and also they help us with the way we play, pushing us forward and giving that extra energy for us in the game when it’s needed. I’m really happy to have them back.”

Liverpool have made a strong start to the season, losing only once – last time out at West Ham United – in 17 matches across all competitions.

Jürgen Klopp’s team currently sit four points adrift of Premier League leaders Chelsea and have qualified for the last 16 of the Champions League with two games to spare having taken maximum points from their four Group B fixtures so far.

The Reds also have a Carabao Cup quarter-final against Leicester City to look forward to, while their FA Cup third-round tie is on the horizon in early January.

“It’s about more than that, to be honest. We want more,” Alisson replied, when asked if 2021-22 is all about regaining the Premier League title.

“This should be the goal and the target for everybody for a team like us. But we have to take it game by game and we must be focused on our jobs to do 100 per cent what we have to do.”