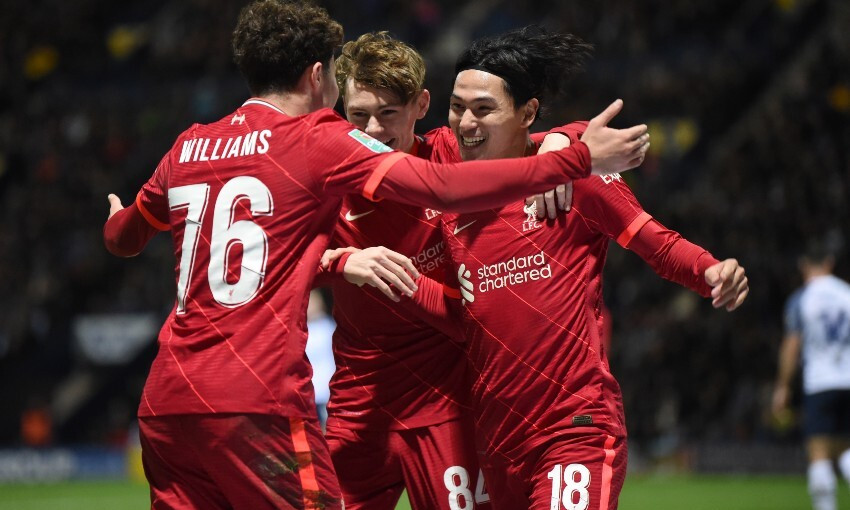 Liverpool sealed a place in the quarter-finals of the Carabao Cup with a hard-fought 2-0 win over Preston North End on Wednesday evening.

The hosts went close to breaking the deadlock in the first half at Deepdale, but were denied by a combination of Adrian and Neco Williams on the line during a frenzied passage of play.

Preston gave plenty for the Reds’ defence to consider in the opening hour, though it was the visitors who took the lead on 62 minutes when Takumi Minamino darted in front of a defender and directed Williams’ centre across goal and into the far corner.

Liverpool’s progress into the last eight was secured in the final stages by Divock Origi, who improvised magnificently to back-heel a high ball over the goalkeeper from six yards out.

The teamsheet confirmed 11 changes for Liverpool from the weekend victory at Manchester United, including a first senior appearance for Harvey Blair and a full debut for Tyler Morton.

Youth was supplemented with experience in the form of Joel Matip, Joe Gomez, Alex Oxlade-Chamberlain and Origi.

A matter of days on from the Old Trafford demolition of Manchester United, it was a very different Liverpool that lined up at Championship side Preston as they sought a place in the last eight of the Carabao Cup.

Nevertheless, the Reds set about imposing themselves on the contest from the off, though it was Tom Barkhuizen who registered the game’s first attempt on goal when he struck over the bar from range following a counter from the hosts.

At the other end, Blair was an inch or two away from meeting an Origi cross with his head; however, Preston mustered another opening with 25 played when Brad Potts charged forward from deep and was sent through on goal. His effort was clawed away by Adrian and behind.

The Lilywhites would go closer still on 28 minutes when, somehow, they failed to covert from three clear-cut chances in the same passage of play.

Joe Gomez was hustled out of possession just outside the Liverpool box, but Sean Maguire was denied by a fine reflex save from Adrian at point-blank range after the ball had been squared into his path by Ali McCann.

Ryan Ledson’s follow-up was blocked on the line by Williams, before Potts ultimately blazed over the bar on the half-volley from 12 yards.

Liverpool emerged for the second half by posing a greater threat – and Oxlade-Chamberlain fizzed an effort narrowly wide in the early exchanges.

Preston were still giving cause for concern, with Adrian needing to keep out Barkhuizen’s placed effort towards his near post.

Then, just after the hour, the Reds made a breakthrough. It owed much to the tenacity of Williams – who had been pushed into a position higher up the pitch following the earlier introduction of Conor Bradley for Blair.

The Wales international did well to retain possession before lifting the ball into the centre of the area, where Minamino got in front of Liam Lindsay to prod across goal and into the far corner.

As the game entered its final stages, Curtis Jones drew a save from Rudd with a low effort from distance, but Jürgen Klopp’s side sealed the outcome of the tie with six minutes remaining.

Kostas Tsimikas’ cross from the left crashed against the crossbar and Williams’ follow-up deflected and looped up into the six-yard box, where Origi was on hand to nonchalantly flick the ball over Rudd with his back to goal.

Williams was denied by Rudd as he had an opportunity to further Liverpool’s lead, but their place in Saturday’s last-eight draw was already all but confirmed.