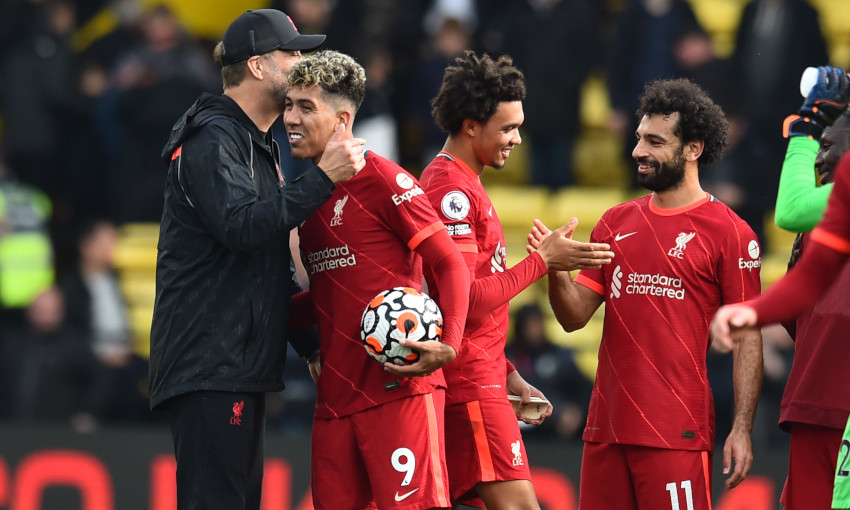 Jürgen Klopp has explained the widespread appreciation and affection for Roberto Firmino in the Liverpool dressing room.

After grabbing a hat-trick at Watford last weekend the No.9, now in his seventh season with the club, provided another tireless performance to help the Reds defeat Atletico Madrid 3-2 in a Champions League thriller on Tuesday night.

During his media previews for Sunday’s Premier League encounter with Manchester United, the manager was quizzed on what makes Firmino different to other forwards and therefore so effective in his role.

Klopp also spoke about the Brazil international’s personality and how his approach on and off the pitch has endeared him to everyone he works with.

“He is a very important player to us,” began Klopp’s assessment of the man who joined Liverpool from Hoffenheim in the summer of 2015.

“He is a connector. He is the best offensive defender I ever saw in my life, definitely. He is a ball chaser, he is defensively incredibly smart with all the things he is doing. He is technically on the highest level, is able to play in the smallest spaces, the tiniest spaces. Can make incredibly good decisions in a really short time.

“And, on top of that, scores goals as well. That’s why we’re all so happy when from time to time he rewards himself with now a hat-trick last week or whatever. Really, everybody in the team loves it because obviously sometimes you think he is a bit short of getting the praise or whatever for the effort he puts in.

“I’m not sure about the numbers but I’m pretty sure he was the player – 100 per cent the offensive player – who ran the most in the last game against Atletico. That says a lot.

“He is just a brilliant boy and a brilliant player. It’s really a joy to work together with him. The way we play is not impossible without him because we have obviously options again, which is good, but how we started playing years ago was because Bobby could play the role he played. So he was very, very influential in all the things we did.”

The midweek contest at Estadio Metropolitano saw Firmino become the 60th player in Reds history to reach the milestone of 300 appearances.

He has netted 93 goals during that spell – the 20th-most for the club – but Klopp stressed his influence on the team goes far beyond the scoresheet.

The boss continued: “Bobby is a very positive but very, at least with me, calm person. Everybody loves Bobby, there’s no doubt about that. The whole team. How can you not?

“If he would not be a nice person, the players would love him because he is doing all the work for them that helps them a lot. Obviously Mo and Sadio love him because he puts them up, passes the ball, even if it’s not the last pass always but the second-last.

“All the midfielders love him because he is chasing all the offensive players of the opponents in their traps. And the last line loves him, of course, as well for the same reason. Ali and him are anyway best friends. Yeah, how can you not love Bobby Firmino? There’s no reason for it. A great guy.

“And when he scores there’s always this extra little bit of joy because we always have these discussions, which are not ridiculous but we never had the discussions about Bobby not scoring enough.

“But we faced the questions quite frequently when there are periods when he doesn’t do that. But he wouldn’t play if he would not be incredibly important anyway in all these different situations.”