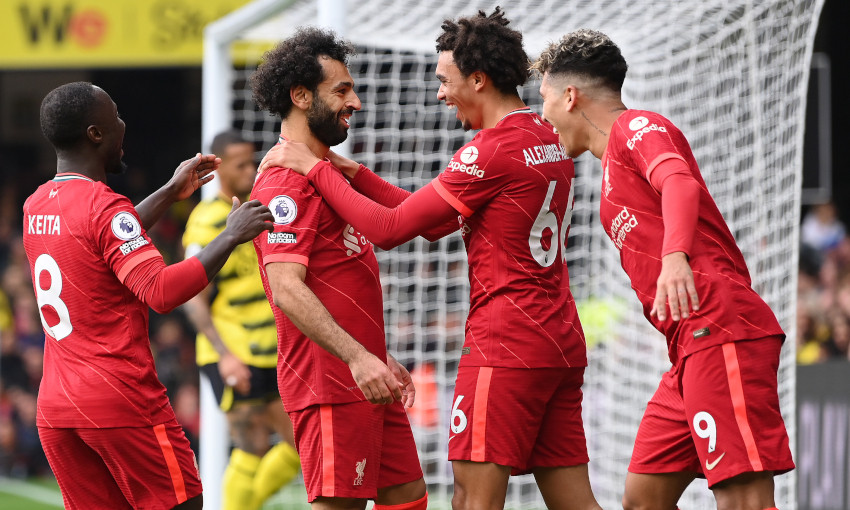 Liverpool moved clear at the top of the Premier League with an emphatic 5-0 victory over Watford at Vicarage Road on Saturday lunchtime.

The Reds took the lead with just eight minutes gone as Mohamed Salah expertly teed up Sadio Mane for the opener.

Mane then had a hand in the visitors’ second, with his reverse pass enabling James Milner to square across the six-yard box for Roberto Firmino to divert in from close range.

Firmino tapped in a third just after the break before more majesty from Salah furthered Liverpool’s advantage as the Egyptian bamboozled a clutch of home defenders prior to sweeping in with another Goal of the Season contender.

The fifth and final goal saw Firmino complete his hat-trick in the last seconds, sending Jürgen Klopp’s side clear at the summit ahead of Chelsea’s tie at Brentford later in the day.

Liverpool made four changes from the draw with Manchester City last time out as Caoimhin Kelleher was named in goal in the absence of Alisson Becker. Elsewhere, Trent Alexander-Arnold returned from injury and Naby Keita and Firmino came in to the line-up.

Vicarage Road welcomed new head coach Claudio Ranieri into the dugout ahead of kick-off, but his presence did not deter an enterprising start from Liverpool.

Salah quickly set about causing concern for the Watford defence and Danny Rose was required to intervene to deflect a shot over the bar inside the opening two minutes after the Reds’ No.11 had been picked out by a sumptuous cross-field pass from Virgil van Dijk.

However, the Hornets’ left-back could do nothing to thwart Salah’s next act as he outmuscled him on halfway before sliding an outside-of-the-boot pass behind the home team’s back line, enabling Mane to run clear and finish smartly beyond Ben Foster first time. It was the Senegalese’s 100th Premier League goal. 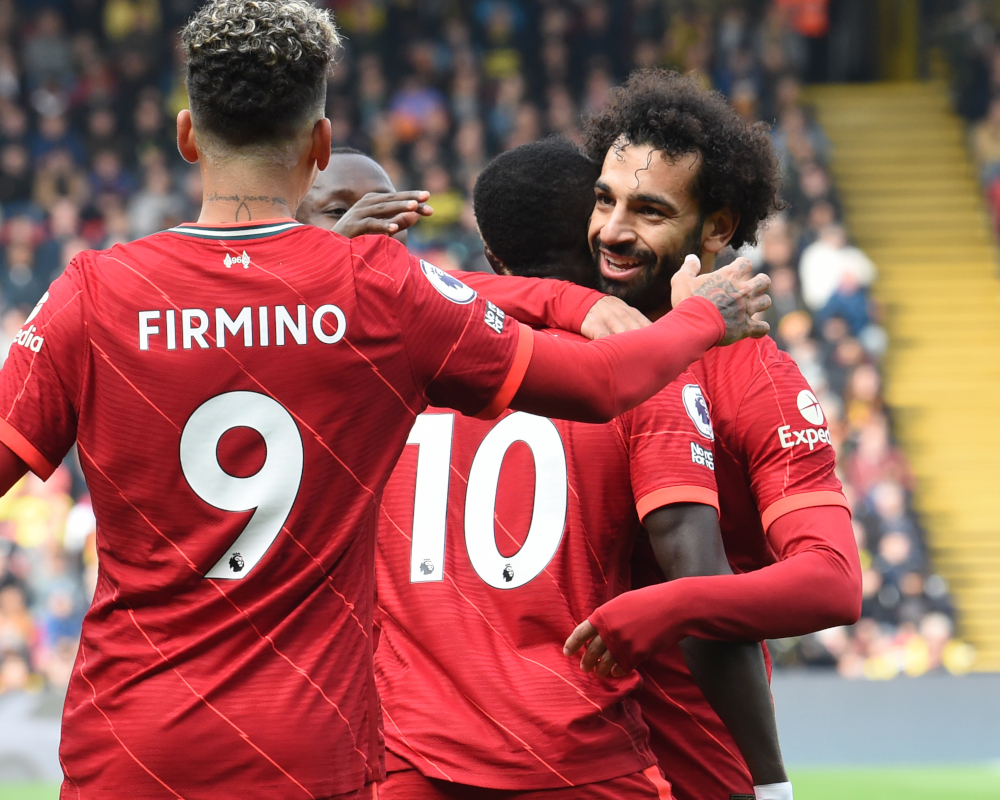 Moments later, Watford’s goalkeeper was called into action to repel a curling effort towards the top corner from Salah, before Rose needed to throw his body in the way of a goal-bound shot from the Egyptian.

A second goal was on the cards – and it duly arrived with 37 elapsed. This time Mane played his part in its creation, with a slick reverse pass sending Milner into space inside the left channel of the box. He squared to allow Firmino to side-foot over the line from two yards out.

Keita then watched an effort clip the top of the crossbar after taking a touch off a Watford body as the pressure showed no signs of abating.

Indeed, that proved to be the case after the break as Foster needed to claw away an effort from Salah before Firmino grabbed his second of the afternoon.

The Brazilian pounced once more after Foster had needed to parry from Craig Cathcart’s inadvertent nudge back towards his own goal in an attempt to cut out Andy Robertson’s cross.

Then, on 54 minutes, another piece of out-of-this-world magic from Salah added a fourth.

The forward demonstrated skill, poise and strength to outwit a handful of Watford defenders inside the area before checking back onto his left foot and nonchalantly curling into the far corner. 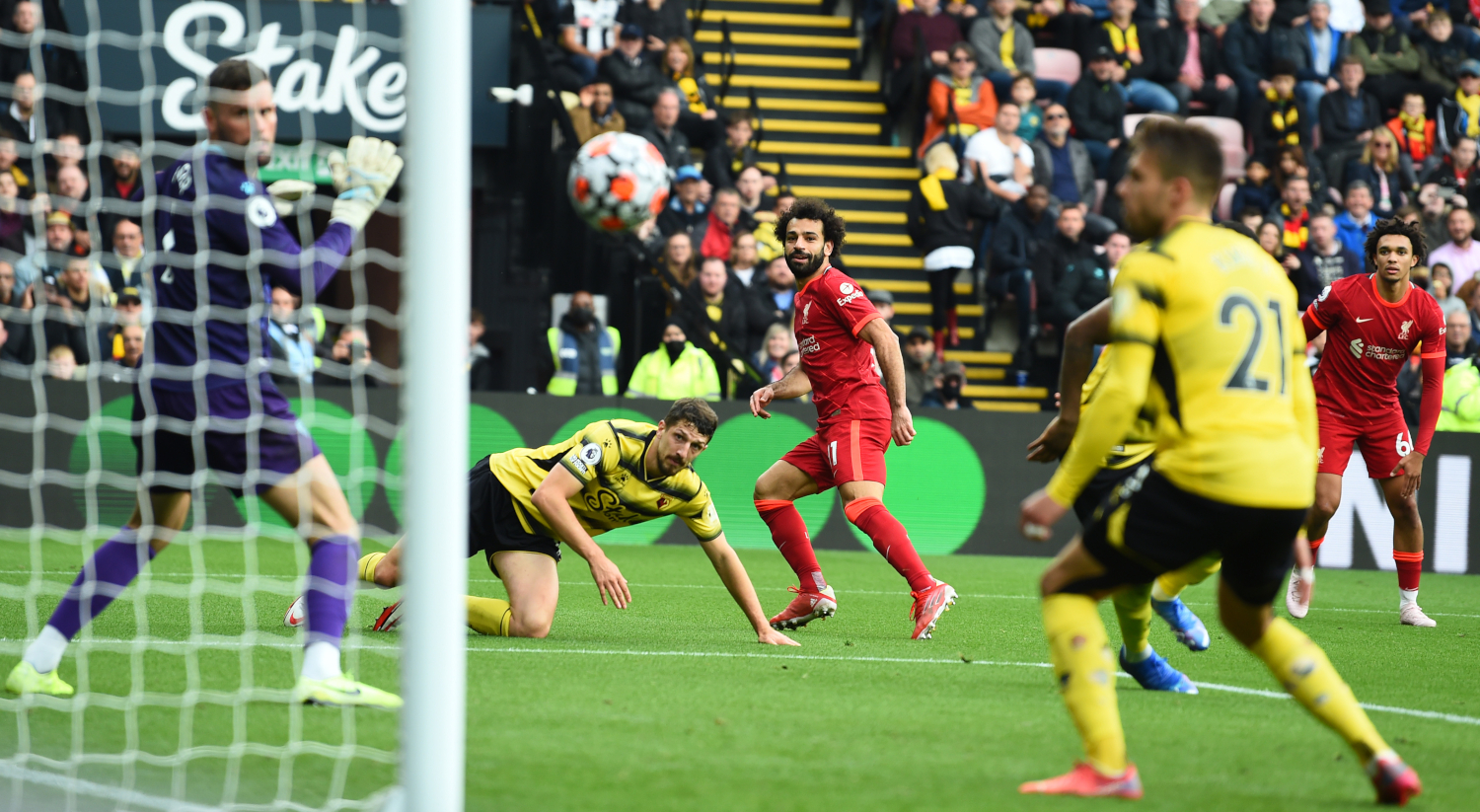 It was the eighth consecutive game in which Salah had scored, six of which have come in the Premier League.

Alexander-Arnold’s deflected shot and a side-footer from Mane threatened to increase the scoreline further, while a rare opening for the Hornets saw Cucho Hernandez scoop wide.

Kelleher needed to save smartly from Ismaila Sarr in the closing stages to preserve Liverpool’s clean sheet, but there was still time for Firmino to complete his hat-trick when he slotted in from substitute Neco Williams’ shot-turned-cross in the final minute.