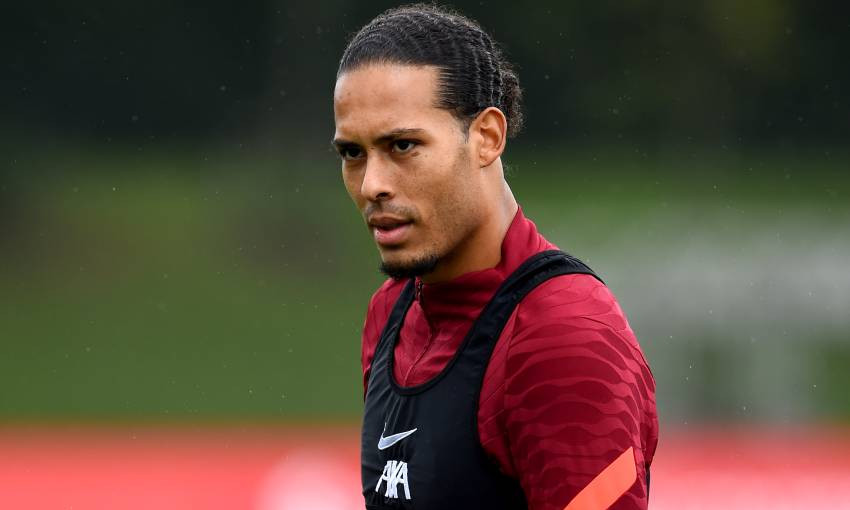 More is still to come, Virgil van Dijk stresses, as he prepares himself for Liverpool's 'massive' meeting with Manchester City.

The centre-half is grateful for every second of his seven competitive outings so far this season, but knows further levels can be reached as the campaign goes on.

Van Dijk's return from a lengthy lay-off with a knee injury has helped the Reds climb to the top of the Premier League table after six rounds of fixtures, with encouraging progress also being made in the Champions League.

On Sunday, Pep Guardiola's reigning champions arrive at a sold-out Anfield – the type of occasion the No.4 has been craving ever since he was sidelined.

Liverpoolfc.com caught up with Van Dijk at the AXA Training Centre to discuss the encounter with City, his own form this term and more – read on for the interview...

Virgil, how much confidence do you and the team have going into this weekend after scoring five goals away at FC Porto?

Obviously talking about that game, it was a very, very good game for us. Great result away from home, six points out of two games in the Champions League – so far, so good in that case. But obviously we know how tough a game it's going to be on Sunday against the reigning champions. So, we have to be very good to beat them, to get a good result. But we're looking forward to it. A full stadium, a full Anfield, it's going to be a special one, I think.

Just on yourself, how have you found the first few months of the season? Did you quickly get back into the swing of things?

Obviously there's room for improvement, and I think that's a good thing. We're top of the league at the moment, as a club, and with the Champions League we're doing well. We're doing well and for me personally as well, I made good progress in getting back to full fitness. The only way to get there is to play games, to learn from situations that happen in games – obviously in training as well but it's sometimes difficult to replicate training into games. But I'm trying everything, doing everything that's possible to get as good as I can, as quick as I can without doing things too much. So far I'm very happy with the progress I've made and I'm not there yet.

Felt good to be back playing Champions League football. 6 points from 2 games! Another great night in Porto! ✨ https://t.co/E3cmBMs8nX

How much more do you feel there is to come?

I think there's still loads to come. Anyone who knows about having a knee injury and being out for such a long time knows that it will take up to, even after you're back playing, another year maybe before you are fully, fully recovered. But everyone's body is different, everyone's knee is different, everyone's recovery is different. So far I feel good and I'm just happy that the manager is putting his trust in me to put me out there, giving me the opportunity to get better as well. I feel good but there is always room for improvement, and I feel like it's on the way.

Not only him, of course, but he's a special, special character and we all appreciate him in our group. Not only for his qualities – because he's an unbelievable defender – but as a human being as well. He's how everyone should take life, I think – very easy, be nice and put a lot of things in perspective. We all appreciate him. But it's just been good being around everyone. The rest of the boys, the work we put in, the fun that we have around the games, it's just good to be around each other and I'm enjoying every bit of it.

After the Brentford game, you said it was important to keep perspective – but how big is Sunday's game against Manchester City?

It's massive. Obviously we're early in the season but it's just one of those games where both sides want to win because you could make a statement. Because it's just so big, you're just excited to go out there and show your quality as a team. But also, now that we have the fans back, it will give ourselves an extra boost, I think, if we could get a good result out of it. Nothing obviously is guaranteed and we have to be at our very best to do that, but we go for it and we'll try everything that we can against a very, very good team.

How much did you miss this type of game while you were out? The Chelsea game at Anfield had an unbelievable atmosphere and big-game feel. Sunday could be even better…

It could be. I missed just being out there, feeling the buzz on a matchday, travel to games, getting [stick] from fans of opponents that we face. Just feeling that you're playing for something again, it's just a nice feeling. Obviously you work towards something during the week [so] that you can perform and hopefully get a good result. I feel very privileged and blessed to be playing on the highest level and [in], I think, the best league in the world, especially with everything that happened over the summer, with signings that certain teams made. Everyone wants to come to the Premier League, I think. So to be playing here is a blessing and I enjoy every second of it.

There's quality from both teams in every area of the pitch. What do you think will be the difference on Sunday?

I think small details, in my opinion, could be the difference. There's going to be a lot of intensity going into that game. Obviously they are such a good football-playing side and we have to be ready to suffer at times. We will respect that but we're going to try to do everything to make it as difficult as possible for them on that day. We know we're capable of doing that but obviously beforehand you can say loads of stuff, but in the game so many things can change. We'll have to be ready for anything and we will be.

You may have Joe Gomez, James Milner or Neco Williams at right-back due to Trent's injury. How much faith do you have in either option?

More than enough. They've proven that they are capable of playing there, doing a very good job. So whoever is playing there will be ready for it. Obviously it's probably going to be a different type of player than Trent is, but that could also benefit us in a way maybe – you never know. We'll see what the manager decides. I know for a fact that we'll be ready.