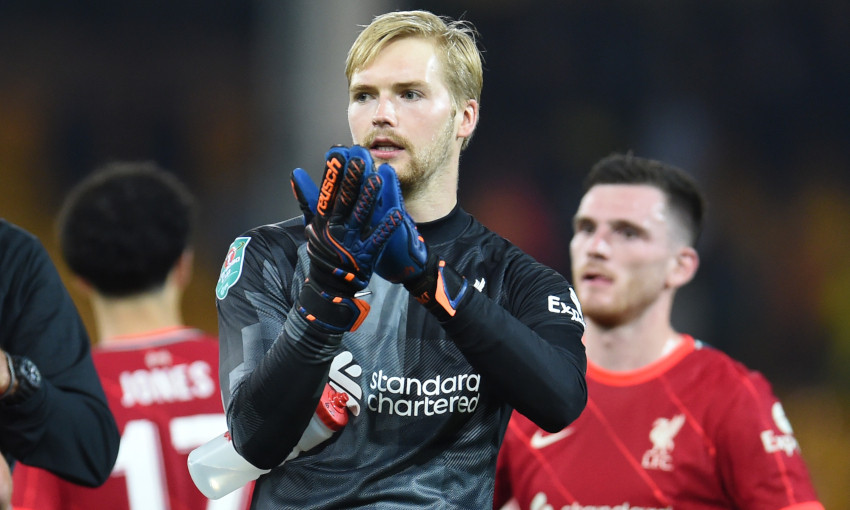 Caoimhin Kelleher was delighted to make an important contribution with an instinctive penalty save as Liverpool defeated Norwich City 3-0 in the Carabao Cup.

The Reds will be in the hat for the competition’s fourth-round draw tonight after goals from Takumi Minamino (two) and Divock Origi eliminated the Canaries at Carrow Road.

Coming into the XI for his first appearance of 2021-22, Kelleher stopped a Christos Tzolis spot-kick when the score was still 1-0, helping to ensure his and the team’s ambitions in the tournament continue on into the next stage.

The goalkeeper spoke to Liverpoolfc.com post-match – read the interview in full below…

How pleased are you with the team’s showing in what was a difficult task midweek in the cup with a lot of changes?

It was a difficult game. Obviously we started well with getting the early goal. Then Norwich came back into it a bit and caused us some problems, but I think overall it was a good team performance. With a lot of changes it’s always difficult as well, but I thought we did well and obviously happy with the win.

People will point to your penalty save as perhaps the key moment in the game, when they were just getting momentum. Talk us through the save from your point of view…

I was just happy to make the save. Like you say, it was a moment in the game [when] they were coming back into it. I managed to make the save, it came off my foot and I think Joe made a great block after it as well. It was just a great team performance to keep the clean sheet.

It looked like you actually moved your foot when you realised it was going to hit your feet. Were you conscious of doing that?

What does the performance and this kind of result say about the group? There were plenty of changes, some boys who haven’t played much and some very young lads stepping up as well, yet still a pretty convincing scoreline in the end…

It’s always difficult when there’s a group of players who haven’t played together that many times, but I thought we did really well tonight. The few young lads making their debuts as well didn’t look out of place, came in and did really well. So I think we have great squad depth, and a great win.

You’re an old head now in this group compared to some of the boys. Did you have any words of guidance for the lads making their first appearance?

I think just: do their own thing. They are more than capable, they showed they have enough talent and they have the hard work, so I think just keep doing what you are doing and they will be fine on their own.

Just finally, in terms of this competition, how big a desire is there within the group to try to go far in it?

Yeah, of course. Look, we want to win every competition we are in. This one especially is for younger players and for people like me who don’t get that many games, it’s a good opportunity to get more games, so the more we progress the more games we will get.